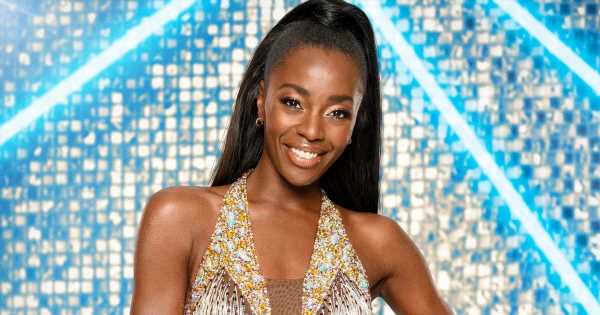 Strictly Come Dancing's romantic curse is nearly as famous as the BBC1 show itself, with dance partnerships continuously evolving into romance on each series.

Celebrities and their professional dance partners spend up to 10 hours per day together training, resulting in some close bonds between some former couples.

Over the years many couples have met on Strictly, including Joe Sugg and Dianne Buswell, Gemma Atkinson and Gorka Marquez, and Stacey Dooley and Kevin Clifton.

Each year rumours swirl in the Strictly sphere of possible romances amongst the cast, and this year is no different.

TV presenter AJ Odudu is reportedly growing close to her professional dance partner Kai Widdrington, with the pair rumoured to be the first romance of this year's series. AJ, 33, and Kai, 26, have formed a close friendship since they began training, regularly sharing fun updates and snaps with fans online.

Most recently, AJ shared a snap of a topless Kai on her Instagram, as well as stories featuring the professional dancer in his underwear.

The pair's closeness hasn't gone unnoticed, with their chemistry on the dance floor becoming a talking point following the first set of live shows.

A Strictly insider said: "Everyone backstage is talking about the sparks flying between AJ and Kai. It’s very passionate and intense whenever they’re together.

“They’re both single and have really hit it off and everyone on the show is saying it’s only a matter of time. They’re always laughing and flirting — romance is 100 per cent on the cards. Kai is totally AJ’s type. He’s got loads of banter and he’s been blown away by her, too." Who has AJ dated?

As with many famous faces, AJ keeps her love life away from the limelight. She has spoken out before about previous partners, yet never confirmed who they were or when she dated them.

While appearing on Celebrity SAS: Who Dares Wins, she revealed she had severe trust issues after her last three partners all cheated on her, much to the surprise of her fans.

In 2018 she shared a snap on Instagram of her and a man named Jordan, with many wondering if the pair were an item. AJ never confirmed or denied the romance, but when a fan commented "Your man?" both she and Jordan liked the comment without response.

However, she looks to be single now, and has spoken out about her dating experiences prior to her Strictly debut. Speaking out about her unsuccessful experiences with dating apps, she said: "I’ve used Raya in the past and apps like Hinge, but no I just don’t meet anyone, aside from TV programs I’ve done, I just don’t bother."

Aside from dating app woes however, AJ has said in the past that she remains optimistic: “I’m still hoping that I’ll meet my man through a friend. I am a personality girl.

“I like charismatic guys who can take the mickey out of themselves but, when it comes to work, they are focused and they know what they want in themselves and in a partner."

Strictly Come Dancing continues on Saturday on BBC One.

For more gossip on all things Strictly Come Dancing, sign up to our daily newsletter here .