The Greens have promised the incoming Albanese government stability, as an incredible showing in Queensland added at least three members to the party’s ranks in Canberra.

Leader Adam Bandt flew to Brisbane on Sunday morning to bask in the new party’s new heartland, which will have two Greens senators and as many as three lower house Greens MPs. 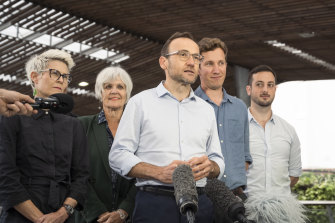 “This election didn’t just change the government, it was a green-slide,” he said, with the Queensland Greens delegation behind him.

Bandt said the Greens would work with the Albanese government, promising stability on the floor of parliament.

“Our approach is that we’re willing to work cooperatively,” he said.

Even if the Greens were not needed to form minority government in the House of Representatives, Bandt was confident they would have the balance of power in the Senate.

And he said they would be willing to wield that power.

“Whenever the Liberals oppose anything, things won’t get through the Senate without the Greens’ support,” he said.

“So we will have a big presence now in both houses, something that puts us in a very strong position in the next parliament.”

Bandt, the Greens’ only member of the lower house, will soon have some company from Queensland. The Greens have claimed victory in the inner-Brisbane seats of Ryan (Elizabeth Watson-Brown) and Griffith (Max Chandler-Mather).

Watson-Brown said the treatment of former LNP Ryan MP Jane Prentice, who Simmonds rolled in a 2018 preselection battle, weighed heavily on voters’ minds and some LNP voters shifted to the Greens on the back of that.

“There’s a lot of residual business about that, particularly in the population of women, and I think for them to actually be looking forward to a woman representing them incredibly important,” she said.

“Certainly a lot of people raise that issue with me and in the way this member, who we have just dislodged, was like a representation of that really toxic culture within that party.

“The way he got into the seat, and also how he’s been voting over time, is really, really influential on people’s decision to oust that party and that particular individual member as well.” 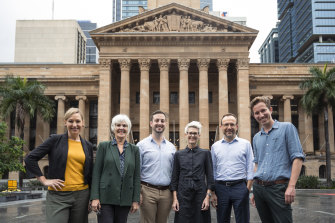 Brisbane was still too close to call, with the Greens several hundred votes ahead on the primary vote.

But a senior Labor campaign source said they remained confident candidate Madonna Jarrett would get over the line, thanks to the party’s efforts to secure postal votes.

While Labor used its access to the electoral role to directly mail voters postal vote applications, the Greens had no such system in place.

“We definitely think we can do it on the back of the postals,” the source said.

“The Greens are only ahead of us by a few hundred votes and you would expect that we would do better than them on the postal votes.

“I certainly wouldn’t be claiming it just yet, but we definitely think we can still get there.”

Greens candidate Stephen Bates said he was “cautiously optimistic” of coming out on top. As it stands, Bates and Jarrett are battling it out for second place on the primary vote.

Whoever wins out will benefit from the others’ preference flow and easily see off LNP incumbent Trevor Evans.

“As the count continues and goes forward, we’re still up with our nose out in front,” Bates said.

More certain for the Greens was the election of Gladstone-based Penny Allman-Payne to the Senate. She will join Larissa Waters in the upper house to sit as Queensland’s second Greens senator.

Allman-Payne’s Senate win will give the Greens a foothold in central Queensland. The Gladstone-based teacher has committed to having her electoral office there, in the middle of coal country.

“We have a plan to look after coal workers for the next decade,” she said.

“We have plans to kickstart the renewable energy green manufacturing economy and we have a plan to give kids in the schools in place like [Gladstone] an opportunity for a really exciting future.”

Chandler-Mather, who also ran in 2019, said his victory was years in the making.

“We in Griffith knocked on over 90,000 doors had tens of thousands of conversations,” he said.

“Not only that, we embedded in these communities now for well over six years.

“When the floods hit, we helped people clean up hundreds of houses across the electorate. When the Omicron crisis hit and people were stuck in their homes isolating, we helped drop off free boxes of food.

“This wasn’t just a campaign that was fought over the last six weeks, this was a campaign recognising that people are fed up with politics.”

“I think for some people that might sound like a trivial issue, but if you’re exposed to over 80 or 85 decibels worth of noise frequently at night, sometimes at 2:30am, we know from studies around the world this has a massive detrimental effect on people’s health,” he said.

“All we’re asking for on that is what Sydney Airport already has, and we know Sydney Airport noise mitigation procedures won there were won by the people-powered movement.”

Former prime minister Kevin Rudd credited his campaign against aircraft noise as a key reason he won Griffith in 1998.