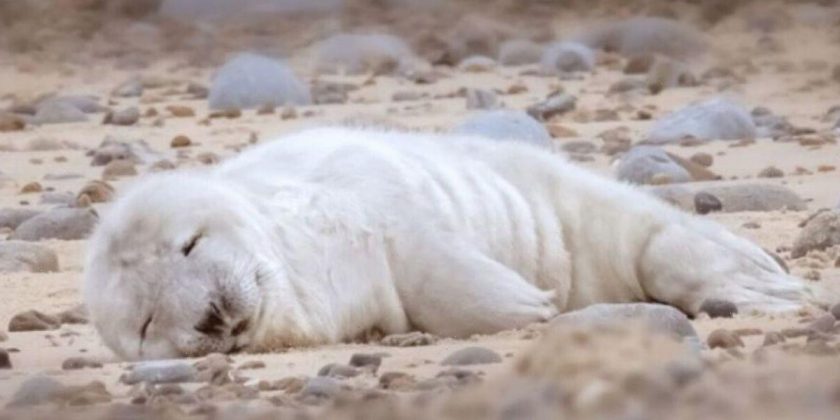 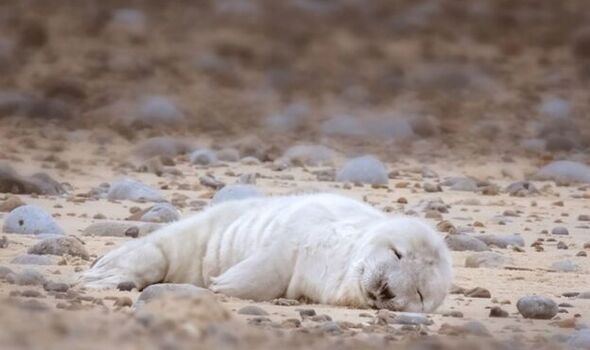 Sweet photos capture the first grey seal pup born at Blakeney Point in Norfolk this season. The white ball of fluff will lose its fur as it matures but for now, almost blends in with the pale sand of the North Norfolk coast.

The rest of the seal colony keeps a watchful eye though and they will have their work cut out over winter, with 4,500 pups expected to arrive between now and mid-January.

The colony has become so big the National Trust cannot keep track of exact numbers anymore.

Duncan Halpin, ranger for the National Trust on the North Norfolk Coast, said until a few years ago rangers and volunteers counted each newborn.

He said: “From 2019, numbers of new-borns and weaned pups – which will have moulted their white fur but will be much smaller than the adults – were recorded in just one specific area to give an indication of the overall size of the colony.”

It is thought the success of the breeding site comes down to its lack of natural predators and the low levels of disturbance in the area.

Mr Halpin said: “The first pup of the season is always a special moment in our year.”

Once they have had their first pups, they return to the same place each year to give birth.

Seals can be seen all year round at Blakeney Point, but the best time is between late October and mid-January when hoards of seals come to the beach to give birth and breed.

The National Trust advises visitors to bring binoculars to get a better look at the seals.

Mr Halpin said: “Our job over the coming weeks is to ensure that the seals remain undisturbed so the females can give birth and the pups can feed in peace to maximise the chances of survival.

“Seals are wild animals and can be dangerous, particularly if they feel threatened. We therefore ask visitors to keep their distance.”

Female seals give birth to one pup each season, weighing in at about 13.5kg

Pups are born with a yellow coat, which turns white after a couple of days.

The pups feed up to six times a day for the first three weeks, gaining about 2kg every day.

They are weaned when they are about three weeks old and weigh 45 to 50kg.

Adult grey seals can reach up to two and a half metres in length and weigh up to 250kg.