While presenting the award for Best Kiss at the MTV Movie & TV Awards on May 16, Addison Rae and Tanner Buchanan got in a little smooch of their own for the cameras!

Addison Rae and Tanner Buchanan gave fans a sneak peek of what to expect in their upcoming movie, He’s All That, when they appeared at the MTV Movie & TV Awards on May 16. The co-stars were on-hand to present the award for Best Kiss at the show, and they kicked off their segment by full-on making out onstage. The show was coming back from a commercial break at the time, and the kiss was interrupted when Addison “noticed” that the cameras were on them. “Oh, we’re back!” she said, flustered.

The two then went on to announce the winners for the award, Madelyn Cline and Chase Stokes from Outer Banks! The onscreen lovers are also dating in real life, so they gave viewers a treat by smooching, as well. There will be plenty more of this to come, too, as the second season of Outer Banks will be premiering on Netflix this summer (although an exact release date has yet to be confirmed).

Meanwhile, He’s All That will also be coming to Netflix eventually. The movie, which is a gender-swapped version of the 1999 film, She’s All That, was picked up by the streaming service in March. In addition to Addison and Tanner, Rachel Leigh-Cook, who was the star of She’s All That, will also be in the remake (with a new role). 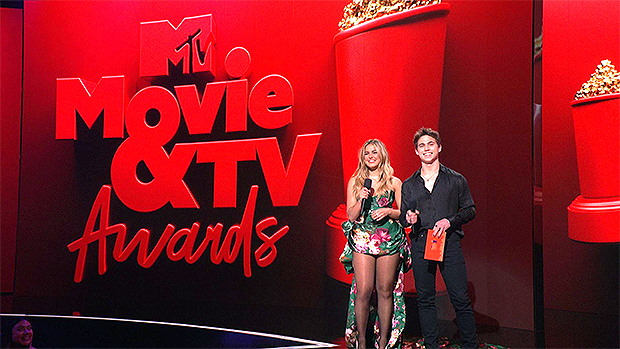 Addison’s character in He’s All That was inspired by Freddie Prinze Jr’s character in the original film, while Tanner will play the school loser, just like Rachel did in She’s All That. The premise of the movie involves a popular influencer accepting a challenge to turn the school loser into prom king. Madison Pettis, Peyton Meyer, Isabella Crovetti, Annie Jacob, Myra Molloy and Matthew Lillard will also star in the movie, but a release date has not been confirmed at this time.

In December, it was also revealed that Addison’s real-life friend, Kourtney Kardashian, will make a cameo in He’s All That. Kourtney shared the news by posting a photo of herself reading a script for the movie with the caption, “Studying.” The He’s All That Instagram page also shared the photo, adding, “Introducing Jessica Miles Torres.” There is nothing more known about Kourtney’s role or its capacity in the movie.