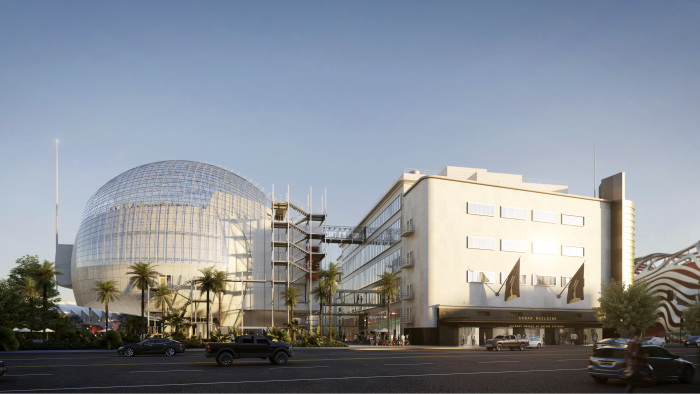 The Academy Museum of Motion Pictures is still more than $100 million short of its fundraising goal as it nears its opening date, according to a new financial report.

The museum is now under construction on Wilshire Boulevard, and is supposed to open sometime next year. But according to financial disclosures prepared by the Academy, the $388 million fundraising campaign appears to have stalled.

It has been more than a year since the Academy last updated its fundraising total, when it claimed that recent gifts had pushed the campaign past the $300 million mark, or nearly 80% of the goal. But in a recent report to bondholders, the Academy says the true figure raised from outside sources was just $281,155,209, or 72% of the goal, as of June 30.

The figure reported to bondholders is audited by PricewaterhouseCoopers. It is lower than the figures the Academy has used in press releases and public statements because it does not include “non-third party” funds — that is, the money the Academy plans to spend out of its own coffers.

“The Academy Museum has raised over $300M,” said Katharine DeShaw, the Academy’s top fundraiser, in a statement to Variety on Monday. “The difference in figures comprises non-third party and operational support. Fundraising has been going well for the Museum, and we look forward to making an announcement in the coming weeks.”

The museum has been beset by difficulties since it was first announced in 2012. At the time, the Academy unveiled plans by architect Renzo Piano, and projected that the museum would open in 2016. The Academy launched a $250 million fundraising campaign and within a year had collected $200 million in pledges. But after that, fundraising stalled and costs ballooned. The museum’s opening date has also been repeatedly postponed.

The largest gift came from Haim and Cheryl Saban, who pledged $50 million in September 2017. The main building of the museum — in the former May Co. department store — will be named the Saban Building. At the time of the gift, museum director Kerry Brougher touted the “momentum” of the fundraising campaign, which he said had reached 75% of its goal. A month later, the Academy touted gifts from Netflix, Bloomberg Philanthropies and the Charles V. Roven and Thomas Spiegel family foundations, which it said brought it past the $300 million mark.

In 2015, the Academy issued $360 million in bonds to fund the museum’s construction. The latest report shows that about $73.1 million of that money remains unspent. That debt is secured by the Academy’s operating revenues.

The Academy’s latest financial statements show a sharp increase in museum development costs as the opening date draws nearer. The organization spent $13 million on development in the year ending June 30, up from $8.6 million the previous year.

The Academy’s overall financial condition continues to be healthy, as revenue from the 90th Academy Awards ceremony increased to $131.8 million from $122.9 million the previous year — despite a 19% drop in TV ratings. Costs for the ceremony ticked up only slightly, from $40.8 million to $41.3 million. The Academy uses its profits from the broadcast to fund all other operations, including $19.7 million spent on film preservation and $5.3 million spent on educational and cultural programs — a $1 million increase from the previous year.