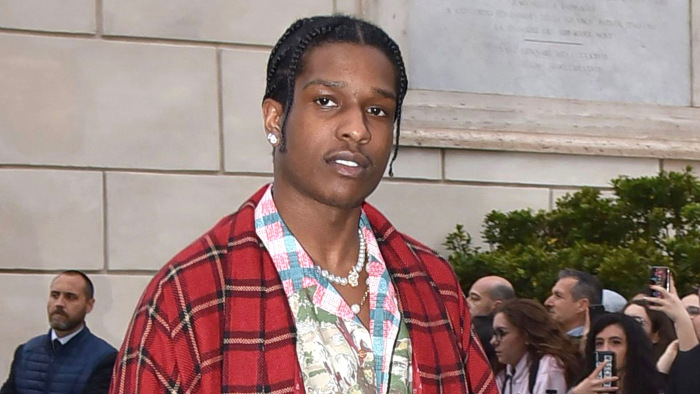 A$AP Rocky, who was found guilty of assault by a Swedish court earlier today, said he was “disappointed” by the verdict but said he will “keep moving forward.” The incident, which grew into an international incident bizarrely involving President Trump, saw the rapper incarcerated for nearly three weeks after an altercation with fans in Stockholm.

“I am of course disappointed by today’s verdict,” Rocky wrote in all caps in an Instagram post. “I want to say thanks again to all of my fans, friends, and everyone who showed me love during this difficult time. Imma keep moving forward. Thank you to my team, my management, attorneys, label and everyone who advocated for justice. 🙏”

Earlier on Wednesday, the rapper was convicted of assault in Sweden and given a suspended sentence. He was not present in the Stockholm courtroom when the verdict was handed down. Two members of the rapper’s entourage, Bladimir Corniel and David Rispers, were also found guilty of assault by the court.

Rocky will not have to serve any more jail time, having already spent nearly a month in a Swedish detention center following a violent confrontation in Stockholm on June 30. But he will have to pay damages to the victim.

The American rapper had been arrested and jailed following a confrontation with 19-year-old Mustafa Jafari. A$AP Rocky, Corniel and Rispers were held by authorities for several weeks until arguments in their assault trial wrapped up Aug. 2, at which point they were released pending the verdict.

The damages awarded to Jafari are reportedly 12,500 Swedish krona ($1,300), considerably less than he had been seeking. “The victim is awarded damages for violation of his integrity and pain and suffering, but less than he requested,” the court said. “The defendants shall, each based on their financial ability, repay the state for its expenses for public legal counsels.”

A$AP Rocky – whose real name is Rakim Myers – and his two companions had pleaded not guilty to the assault charge, arguing that they had acted in self-defense. They described Jafari as having approached them several times and looking “hostile.” A$AP Rocky testified that the situation “got a little scary.”

But prosecutors alleged that the three men used too much violence for their actions to be considered self-defense, and had asked for at least a six-month jail sentence.

I AM OF COURSE DISAPPOINTED BY TODAY’S VERDICT. I WANT TO SAY THANKS AGAIN TO ALL OF MY FANS, FRIENDS, AND EVERYONE WHO SHOWED ME LOVE DURING THIS DIFFICULT TIME. IMMA KEEP MOVING FORWARD. THANK YOU TO MY TEAM, MY MANAGEMENT, ATTORNEYS, LABEL AND EVERYONE WHO ADVOCATED FOR JUSTICE. ??