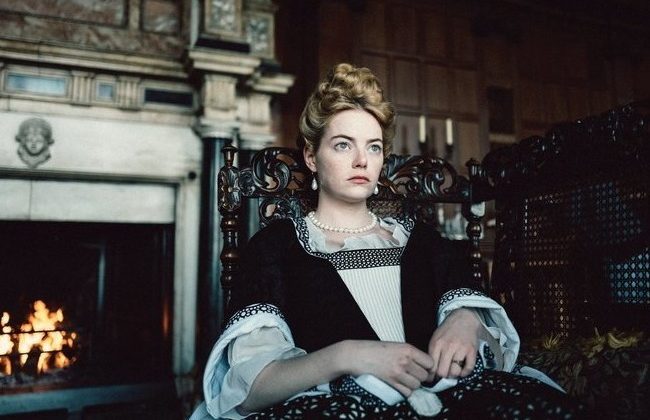 It is at once a powdered wig allemande and a knife in the guts. The wickedest filmmaker working today has done it again. And, this time, his dark sense of humor fits the period and makes sense. Yorgos Lanthimos has found a home in Queen Anne’s court where two cousins vie for the favor of her Highness. It’s a cruel place where tongues are the sharpest weapons, although swords have their place as well. The Favourite is a glorious chess match, both in mind and body and soul. And it is, savagely, the funniest movie of the year.

Written by Deborah Davis and Tony McNamara, The Favourite is a labor of love and the result of a script first written over 20 years ago. The writing team’s research is extensive and much of the film is based in truth. Sarah Churchill, Duchess of Marlborough (Rachel Weisz), was Queen Anne’s (Olivia Colman) most trusted adviser and confidant but there were whispers Sarah was pulling her Highness’s strings. The Queen started to see Sarah in a different light and began to favor Sarah’s cousin, Abigail Hill (Emma Stone). The potential was already there. What Davis and McNamara contribute is pure acid — the hydrochloric kind. The script’s acerbic tendencies fit Lanthimos perfectly and he knows exactly what to do with the material. He entrusts it to two veterans of his films — Colman and Weisz — who should both give lectures in comic timing. Colman’s Queen Anne is a toady thing whose loneliness after the deaths of her 17 children (true story) has left her cranky and vulnerable. Uninterested in politics, she essentially entrusts the rule of England to her closest friend, Lady Sarah. The scheming Duchess of Marlborough uses her influence to shape England’s future. (The film is set in the early 18th century and the country is at war with France.) But the Queen is still the queen, and the greatness of Colman’s performance is how she plays weak and formidable at once.

Into the dysfunction, Abigail arrives. Lady Sarah’s cousin has not enjoyed the trappings of court and is eager to serve. She slowly gains the Queen’s favor, and Sarah, recognizing the danger she’s facing, reacts like a viper. But Abigail is cunning, and she dodges every bullet fired her way — one quite literally. She nurses the Queen’s sore legs and impresses her with wit. All of this earns her Sarah’s wrath and the film’s anarchy comes from their rivalry. However, it’s not played for giggles. If you laugh at what’s onscreen, it’s your own fault. Try and stop yourself. The Favourite, like Lanthimos’s other films blurs the line between comedy and tragedy often. It makes you wonder if there is a line. Sensitivity, on the other hand, runs contrary to Lanthimos’s past work. This is a guy who kills animals (a cinematic cardinal sin) with impunity. (More than Wes Anderson!) But The Favourite features an indoor duck race, for example, and it’s one of the greatest movie scenes of this or any year. The film has moments of celebration which have, thus far, whether on purpose or not, eluded Lanthimos. His dark streak (Dogtooth, The Lobster, The Killing of a Sacred Deer) is riveting, rubbernecking stuff. But The Favourite is the first of his films that inspires, and that’s a harbinger of future greatness.

Comedy, romance, sensitivity, The Favourite contains these things, but it’s foremost a Machiavellian drama of the highest order. “I am on my side. Always.” Abigail’s words speak for everyone in this royal rumble. The Favourite is about lies and deception, betrayals and ambition. It’s about a cutthroat world within a cutthroat world. Forget girl power, these women are in a war of attrition. The Queen rules, but it’s a man’s world and the ladies of court claw for their lives to either maintain their status, or rip it from the clutches of those who would deny it. It’s not feminism, it’s survival. The intensity of the production is a reflection on the stellar cast. Lanthimos veterans Colman and Weisz have mastered the filmmaker’s deadpan sensibilities and Stone fits right in beside them. Colman is the standout. She’s in her own universe as the blubbering queen and it’s joyful to watch. (Anne is the third queen Colman has played now.) Weisz and Stone have similar, motor-mouthed characters, but Queen Anne is another creature altogether. Awkward and infuriating, she is somehow sympathetic, and full of surprises.

It’s also worth mentioning the splendor of Sandy Powell’s costume design and Fiona Crombie’s magnificent production design. The Favourite is a true period piece that takes you there in every way. Lanthimos strives to present the art department’s work optimally in every frame, even employing a fish eye lens in worthy scenes. Even he seems awed. There aren’t many movies like The Favourite. Lanthimos is fast becoming one of the premiere directors in the business.