Australia’s cattle farmers are at a tipping point, poised to seize a once-in-a-generation opportunity to reshape the industry to be more sustainable and high value after the toughest drought on record.

Farmers are finally in greener pastures after battling years of what was the most severe drought on record and they’re poised to tap a rare opportunity to modernise their operations and ultimately kick-start the market for climate-conscious meat. 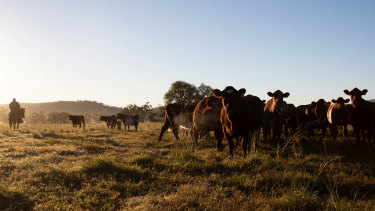 Australia’s beef farmers are poised to capitalise on a once-in-a-generation opportunity to reshape the industry. Credit:Janie Barret.

“So much of the first 20 years of my farming life was dominated by high interest rates, but it’s so different now,” said Ms Corrigan, director of her family’s Rennylea Angus beef business.

“You might see the ducks line up in your favour like this twice in your lifetime, and you can’t wait and ‘I’ll take advantage once I have done so-and-so’. You’ve got to seize the opportunities, make decisions and follow through quickly.”

Ms Corrigan was speaking about the ducks lining up in the wake of widespread rain right across Victoria and NSW as well as some Queensland grazing regions. The rain has delivered an abundance of cattle feed at the same time as low interest rates and strong demand and high prices for beef in domestic and international markets – which are recovering as COVID restrictions ease.

A wildcard factor working in farmers’ favour is the record low number of cattle in the national herd. There’s also the opportunity to borrow cheap money to improve farm infrastructure, fatten cattle to sell for top dollar and buy prime breeding stock to improve the genetic traits of their herd.

“We are in a unique position to assess and then act on the future for the Australian beef industry,” said agribusiness banker Rabobank in their recent Green Grass and Empty Pens market report.

Rabobank senior analyst Angus Gidley-Baird said farmers can choose the direction of their business for the next generation. 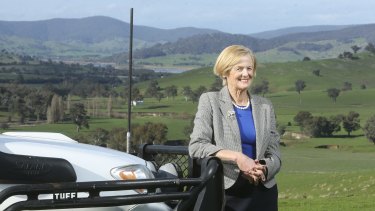 Australia’s grains industry has already undergone its own revolution, with farmers across the country switching their production technique almost entirely to the world-leading practice of no-till cropping.

Traditionally croppers would plough their land before planting, removing crop stubble and turning the soil over before planting. No-till cropping leaves stubble in place to reduce evaporation, encouraging soil fungi and microbes to grow and boost moisture retention, soil health and even more carbon storage.

Mr Gidley-Baird said he hoped farmers considered investing to not only upgrade their herds, but also emerging technologies to minutely measure cattle performance such as growth and fertility rates as well as the quality of beef sold to retail.

“You use that information to improve the business, which could mean making a decision to use estimated breeding values for your bull selection,” he said.

The biggest beef industries, in the US and Brazil, are structured to churn out large volumes of standardised beef for domestic and global markets.

They can outstrip Australian exports on quantity and reliability of supply, given the highly variable weather Down Under, their strength in size creates an opening for Australia, Mr Gidley-Baird said.

“The US or Brazil, it’s a big ship and it’s hard to turn around,” he said. “Australia can deliver a more refined product, and that’s where we have to concentrate. We can be more bespoke – for example, Brazil will supply China’s huge demand for grinding beef – Australia might supply better cuts for hot pot recipes.”

“These are discretionary spenders who care about whether forests are being burned to make way for their beef, or whether animals are pasture-raised in biodiverse environments,” Ms McRobert said. “The advantage for Aussie farmers won’t be a higher carcase price per se but instead access to a consumer class that other beef-producing countries may not be able to reach.”

“There’s been a lot of talk about price premiums for products that are branded ‘sustainable’, but while local consumers are likely to pay a little more for this credence attribute, that small premium is unlikely to make much difference at the farm gate.”

Ms McRobert said while significant price premiums for “sustainable” beef were yet to hit retail shelves anywhere around the world, export markets are the primary driver of the Australian beef industry, where the majority of product is sold – and global markets were “inexorably moving to regulated sustainability reporting requirements”.

“Unless the sector can prove that it genuinely is the clean and green, sustainable industry it aims to be, there’s a real risk that Australia could be impacted first in the lucrative European market and then in others.

“Banking and insurance organisations are also looking closely at their risk exposure in natural capital – cattle producers who can’t demonstrate sustainability credentials are not going to be priority clients.”