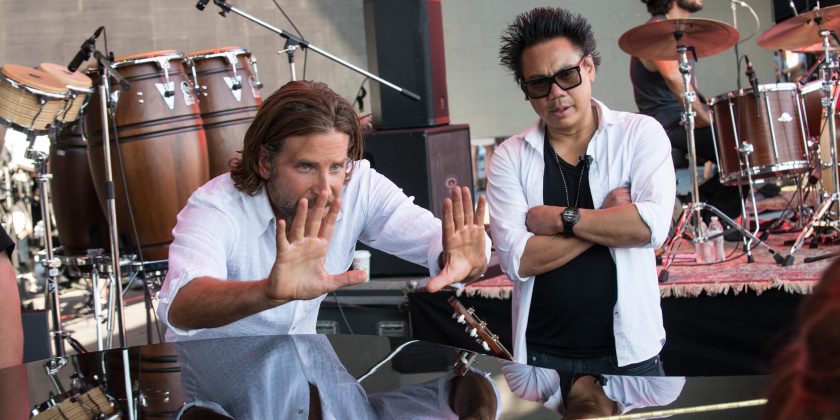 You’ve long seen the world filtered through Matthew Libatique’s eyes, as the 50-year-old cinematographer has lensed stories by Darren Aronofsky (Black Swan), Spike Lee (Chi-Raq), and more throughout his 26-year career. Now, with a fresh Oscar nod for shooting director-actor Bradley Cooper’s Best Picture nominee A Star Is Born in tow, it’s time for the world to see him.

“There’s something about Filipino culture, when somebody [succeeds], the whole nation rallies around it,” says Libatique, whose potential victory would make him the first person of Filipino descent to take the Best Cinematography honor. And they have plenty to celebrate in Libatique’s lauded vision — including tender close-ups and angelic lighting — for Cooper’s take on the classic musical romance costarring Lady Gaga.

“Where we put the camera [for] every performance was as if we were shooting a dialogue scene,” he continues, adding that he scaled back to “protect” Gaga’s trust in him for her transformation into a budding singer, Ally, who forges a career — and a turbulent relationship — with Cooper’s fading crooner, Jackson. “You’re looking at somebody who’s one of the biggest rock stars in our world, and to be able to pull that back and become Ally and show that vulnerability, I didn’t want to step on that.”

Bold and inviting, deep yet intimate, Libatique’s scope is as easy to feel as it is to watch. Read on for EW’s conversation with the two-time Oscar-nominated cinematographer.

ENTERTAINMENT WEEKLY: The red and the green light in this film was such a powerful way to present this story. What was the inspiration for that and what does it mean in the context of the film to bathe this story in those tones?
MATTHEW LIBATIQUE: The color scheme was born out of a need to create a real character out of Jackson Maine. The first image is him on stage in front of thousands of people…. the color scheme you see on stage with him is something that’s been pre-established before we even drop into the story. Red was the color we used to connect him and Ally, so that teases in the moment you see her for the first time on stage in her homage to Edith Piaf. That red exists around the bar because it has a lot to do with his connection to alcohol and his connection music. That color reintroduces itself [frequently], and reintroduces itself in “Shallow” when she performs the song for the first time in front of people and in the bar when they start to connect, so it’s a recurring color and it exists throughout all the performances until the very end where you don’t see that color and it sort of becomes a white light of sobriety.

The film feels so intimate and visually contained as opposed to most concert films, which feel chaotic and sprawling in those moments. You went inward and the camera is so focused on faces and close-ups, and it makes the whole thing such an intimate experience.
Bradley had the idea early on that maybe we shoot every concert and every performance from the stage’s perspective so that we’re staying subjective with the characters in the hopes that the audience feels what it feels like to be on stage as a person, and every time we would investigate looking out from the audience’s perspective, we were disconnected from this subjective experience of Ally or Jack.

And you do have music video experience, so I’m wondering how you translated that to this film — especially in the scenes where Gaga performs on SNL.
I’m sure it has some bearing, but beyond this we approached every concert performance like it was a narrative scene. If you listen to the lyrics, they all have some bearing on the narrative. Where we put the camera [for] every performance was as if we were shooting a dialogue scene. For me, from my past experience, it’s how I moved and modulated light to create impact and sync with whatever was happening in the rhythm of the song. I didn’t see overt influence from music videos; It was more a psychological one from my past experience. I don’t think I pulled on those experiences.

I learned a lot on Straight Outta Compton in terms of narrative scenes that happen onstage, but that film was more about the spectacle for people everybody was already familiar with, and this was more about people we needed to establish as real people, trying to create a real world of music. I was more focused on the filmmaking and storytelling part of it than I was the spectacle…. And I learned a lot from Black Swan for how to light a stage show, how light is part of the language of a performance, whether it be ballet or music.

It’s probably not easy to capture one of the world’s biggest musician’s who’s performed at the Super Bowl as a vulnerable starlet performing on stage for the first time. How did you achieve that?
I wanted to make her feel comfortable and protected; I didn’t want her to worry about anything. I wanted her to adjust and both of them as actors to be able to perform in improvised positions, so if they felt uncomfortable in one place and wanted to shift to another, I kept the lighting broad so that we had that element…. Bradley did things that were so creative that he needed that space. For the entire film, whether it was a concert or narrative scene, I kept thinking as broad as possible with an eye on protecting her and making sure that there was a trust there and that she didn’t have to worry about where she was looking or where she had to be. I wanted to take away the restrictions you impose on actors that have done it for 10 films, I wanted her to have the freedom to be a person and become Ally. You’re looking at somebody who’s one of the biggest rock stars in our world, and to be able to pull that back and become Ally and show that vulnerability, I didn’t want to step on that.