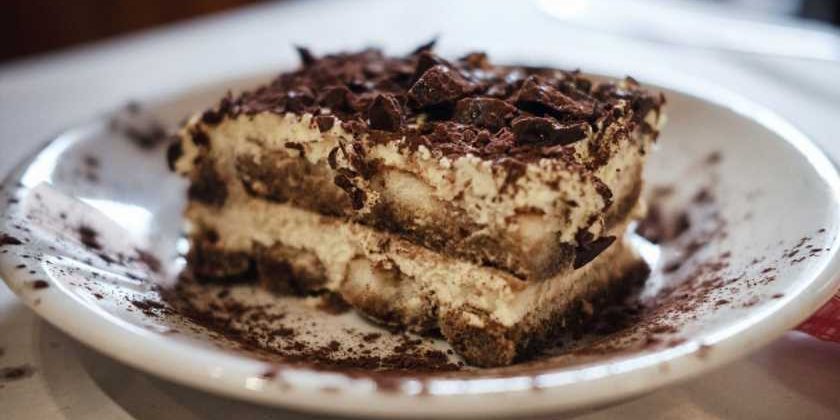 In honour of Ado Campeol, who invented the tiramisu in the 1970s and has just died at the age of 93, writer Alex Sims pens a love letter to the creamy, coffee-soaked Italian dessert.

Forget sticky toffee pudding. Consign custard and crumble to oblivion. Banoffee pie? Bin it. For me, there will always be one dessert to rule them all: a comfortingly creamy, espresso-spiked hit of tiramisu.

A mouth-watering amalgamation of whipped mascarpone cheese, layered with coffee-soaked sponge fingers, topped with a delicate dusting of cocoa powder; tiramisu has always felt like the perfect balance between cloyingly sweet, nostalgic comfort food and the height of glamorous sophistication.

It’s a dessert I have eaten all my life and never tired of. As a child, I ate bowlfuls of tiramisu hands-first, prodding hot sticky fingers into the layers of cream. As a teenager, it felt like the kind of pudding that marked you out as having the sophistication of a ‘proper adult’. So, naturally, it was my order of choice after a dough-ball filled meal at Pizza Express in an effort to (unconvincingly) evoke some Sophia Loren-style charisma. Now, it’s my go-to dinner party dish when I really want to impress my guests.

Therefore, I was surprised to hear that rather than being a historic Italian dish passed from generation to generation, the world-famous dessert was actually created in the 1970s by Italian restaurateur Ado Campeol, who died on Saturday (30 October) at the age of 93.

Known as the ‘father of tiramisu’, legend has it that Campeol, who passed away at his home in Treviso, created the pudding by sheer fluke when he accidentally added mascarpone instead of cream to an ice cream mixture.

Although Campeol and his wife, Alba, who owned the restaurant Le Beccherie, never trademarked the dessert, it is now widely considered that they invented it, adding it to their menu in 1972.

This means I have Campeol to thank for a whole host of deliciously happy food memories. Far away from the sun-soaked plains of north-eastern Italy, my mum made tiramisu into the ultimate comfort food by spreading a thick gooey layer of Nutella on the top of each fat sponge finger. And I’ve carried the recipe with me, making it for myself with a healthy glug of Amaretto.

Even as I’ve grown older, there’s still a playful thrill to be found in dunking your spoon into layers of frilly, white cream and cloying chocolate and polishing the whole thing off in one satisfying mouthful. It has all the childlike joy of diving into a creamy Knickerbocker Glory, but with the added naughtiness of a caffeine-induced kick.

In fact, I credit tiramisu as being the gateway dish to my long-held love of baking, which has been a calming, therapeutic outlet in stressful times. So, thank you Campeol. I raise a spoonful of chocolate-dusted mascarpone in your honour.