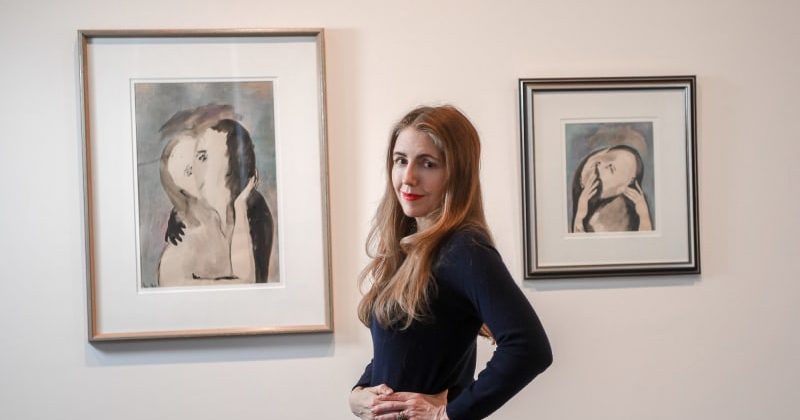 "Most people look at my pieces and find them repulsive," says Patricia Piccinini of her sculptures, "but all my work is about love."

Piccinini has spent years working across many media, but it's her sculptures that have resonated the most – at once hyper-real and other-worldly, they throw up questions and provoke mixed emotions, with their hair and crevices and skin folds that may or may not be orifices. 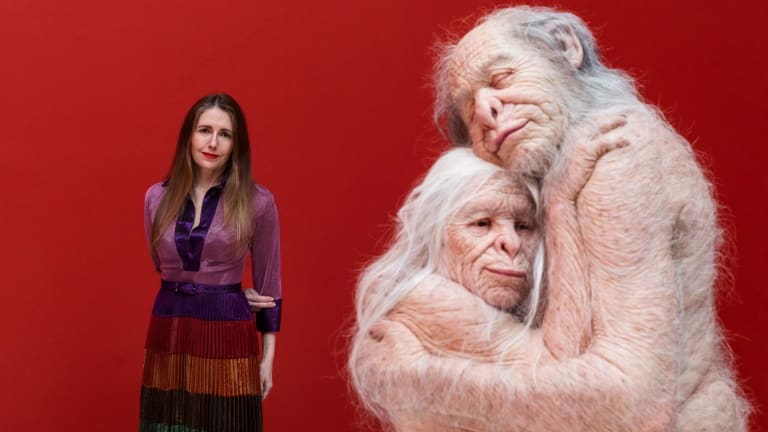 Patricia Piccinini with her new work, Sanctuary, at TarraWarra Museum of Art. ”To see this connection between two older creatures, for me, is really beautiful.”Credit:Rick Liston

But it's connection that underlies most of her work.

In a juxtaposition that might at first seem unlikely, this element of Piccinini's work is brought to the fore in a new exhibition pairing her work with that of Australian modernist painter Joy Hester. 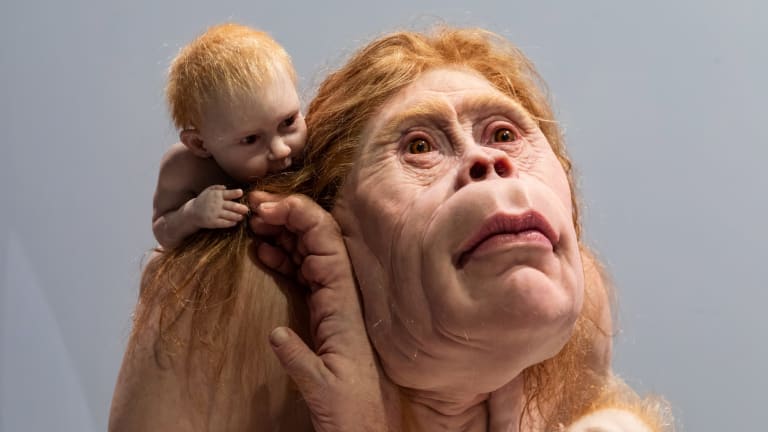 In a sprawling show at TarraWarra Museum of Art, Patricia Piccinini & Joy Hester: Through love, Piccinini's often disquieting pieces will be shown alongside the ink and brush works of Hester, focused on love and intimacy, from romantic love, maternal devotion and human and non-human relationships – even between animate and inanimate objects.

Just as the meaning of some of Hester's works become clearer after closer viewing, so too does the connection between these two significant female artists.

Hester, who was part of Melbourne's "Heide circle" (she died in 1960), portrayed intimate scenes between couples, often so entwined that they share an eye or a face. She's considered one of our underappreciated artists, neglected during her lifetime, unlike her male counterparts (she was married for a time to Albert Tucker). She had only three solo exhibitions during her lifetime and many of the works in this exhibition have rarely been seen.

Curator and TarraWarra director Victoria Lynn has focused on the notion of merging that figures prominently in both artists' works. 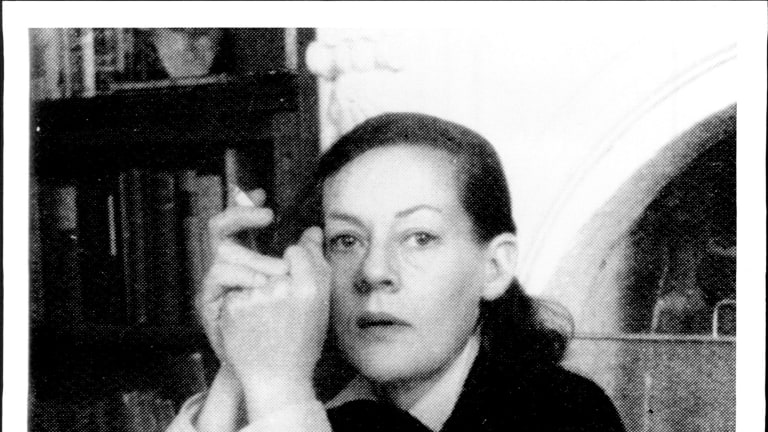 Artist Joy Hester is considered one of Australia’s underappreciated artists, neglected during her lifetime unlike her male counterparts.Credit:Australian Broadcasting Corporation

"In Patricia's work, there's the merging of human and animal forms, but for this show we've chosen works where there's a relationship between two entities – mother and child, and child and animal," she says. "And the 24 works from Joy in the show are mainly focused on the idea of the couple, with a couple of works looking at mother and child. The show is really about intermingled figures."

Hester's works were a huge influence on Piccinini's early practice; she describes the modernist artist as "a part of my DNA". 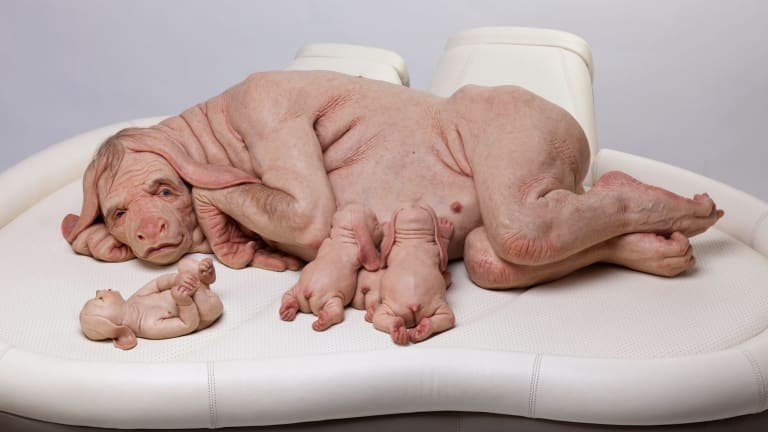 "I think she is for a lot of women artists," she says. "There are some really literal connections that you can make – for example, where two bodies connect and you don't know where one body ends and the other begins … that's a very direct reference."

Hester's portrayals of "intimacy without borders" spoke to her own interests in exploring identity and sense of self. 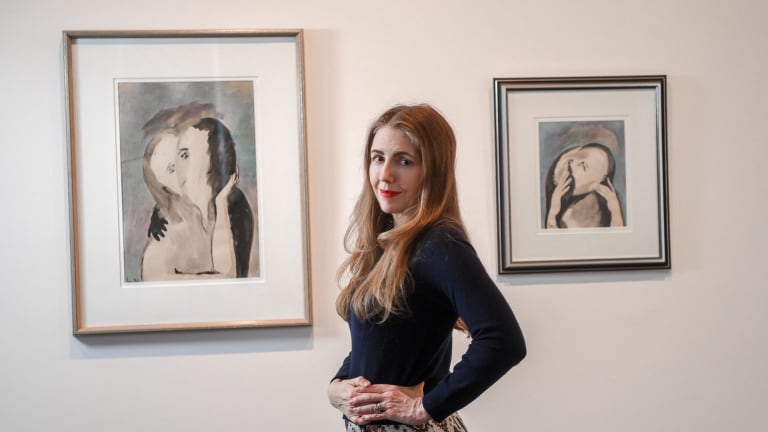 Piccinini, with two Hester works at Tolarno Galleries, says she loves how Hester made ‘work about everyday life, and everyday life is interactions between people’.

She first encountered Hester's work through art historian Janine Burke's 1981 biography of the late artist, and was immediately struck by their beauty and hopefulness.

"I'd been studying the Angry Penguins and Hester was really the only female presence there – and what a presence. She was so different," Piccinini says. 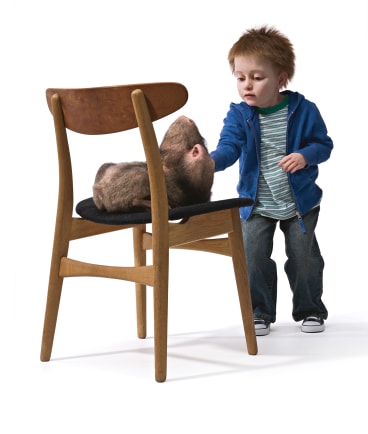 "I couldn't identify with all the Tucker stuff very well but with her work I could. I loved this … blending (of figures) that she did. I take what Hester did and go on to take it into a sort of commentary on the technological impact of the work on our everyday lives. One of the things I loved about her is that she makes work about everyday life, and everyday life is interactions between people, between lovers, between mother and child."

Hester was also a poet – although she received only negative reviews of her written work – and some of these also appear in the exhibition. 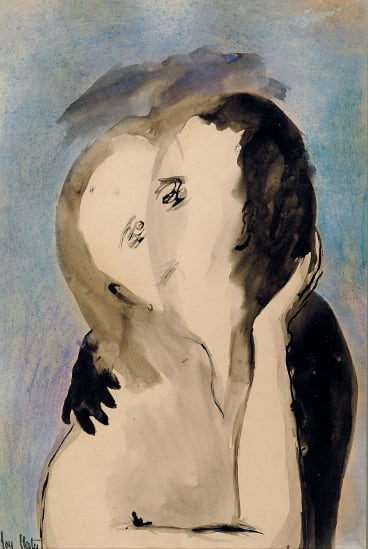 "There's one poem where she talks about 'when heart penetrates heart' – it's wonderful," says Piccinini. "How often in life do you experience that?"

Works of Hester's in the show (drawn from the NGV, Heide and private collectors) include pieces from her series Love 1949 and Lovers 1955-56. Among Piccinini's are some of her most well known sculptures, including The Young Family, which explores biotechnology as well as maternal love, The Lovers, in which two motor scooters embrace, and Doubting Thomas, which features a small boy curiously putting his hand into the mouth of a fantastical, hairless creature. 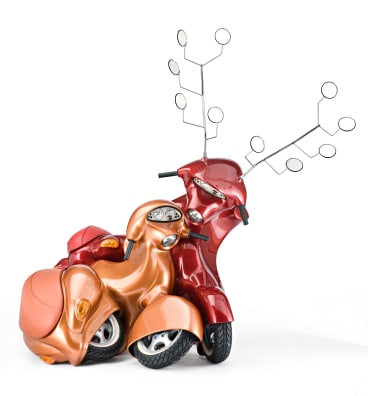 Her rarely-seen, 34-metre-long hot air balloon, Skywhale, whose maternal presence is unmistakable with five breasts hanging either side of the balloon, will also make an outing, expected to be tethered outside the museum.

"Like Joy Hester, Skywhale wasn't initially well received," says Piccinini, "But now I think people are waiting for her to come out! She has a very strong maternal presence."

Piccinini has also created a new work in response to Lynn's theme for the exhibition.

Sanctuary 2018 – comprised of a sculpture, a wall print and a graphite drawing on paper – is inspired by the life of endangered African bonobo chimpanzees, the closest living relative to humans.

The sculpture has two elderly bonobo-like creatures locked in a loving embrace.

"When Victoria came to me and talked about love, I immediately thought about bonobos," she says, explaining that she was drawn to the fact they are a peaceful species with a matriarchal society. Most people know about their sexual behaviour (they have inordinate amounts of sex and very rarely fight), but it's the species' tenderness that fascinates Piccinini.

"I know I'm simplifying it, and perhaps even anthropomorphising it a bit, but at a simple level, they have a very different way of being. They're incredibly sensual creatures and are very peaceful and calm. They don't tear each other to bits. I'm quite enamoured by them."

The work, which directly references many of the couples in Hester's paintings, with the cheeks of the chimeras touching, also references Piccinini's view on ageing.

Lynn hopes the show will bring Hester's work to a new audience and "provoke conversation about the two artists and the relationship between contemporary practice and modernism".

Piccinini believes the show will be emotional.

"As a viewer we mirror what we see and we're … empathetic to what we're witnessing and that can be positive and hopeful. How many things do you read or experience that are really about love, other than romantic comedies, which are not really about life," she says.

"That's what our job is [as artists]. We make a space for people to come in and think about these concepts. You don't think about them watching The Bachelor."

Patricia Piccinini & Joy Hester: Through love is at TarraWarra Museum of Art until March 11, 2019.