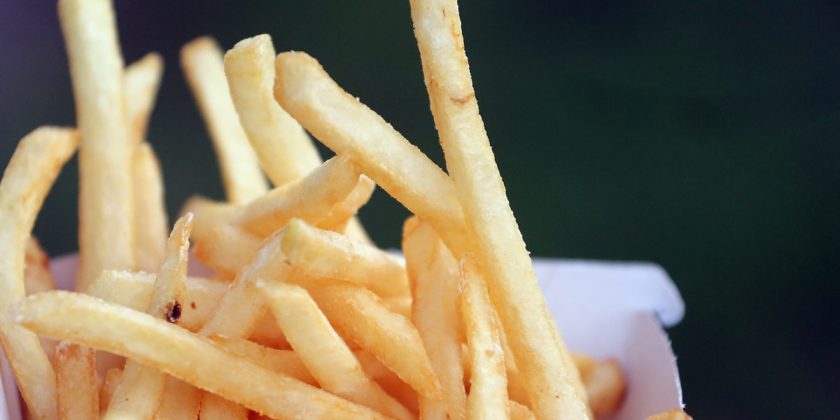 Imagine, if you will, that you’ve just gone to your favorite fast food joint and ordered a burger and fries. You receive the familiar paper bag full of food, clutching it in your hands as you inhale the intoxicating perfume of your meal in all its glory. You open the bag, and inside the carton that should contain thinly-sliced potato nirvana, you instead find… six fries. According to one professor, six French fries is the ideal portion size, contrary to what anyone who’s ever eaten fries might say. Dr. Eric Rimm, a professor at the Harvard T. H. Chan School of Public Health, dubbed potatoes “starch bombs” in The New York Times article aptly titled, “You Don’t Want Fries With That.”

Dr. Rimm suggests that if you simply must, indeed, get fries with that, you should consider keeping it to a serving of six fries.

“There aren’t a lot of people who are sending back three-quarters of an order of French fries,” Dr. Rimm told The New York Times. “I think it would be nice if your meal came with a side salad and six French fries.”

But the campaign against French fries didn’t end there. As if calling potatoes “starch bombs” wasn’t cruel enough, the process of turning the vegetable into fries (removing the skin, deep frying them, adding delicious condiments) was compared to turning the potato into “a weapon of dietary destruction.”

In the United States, potatoes are the most commonly eaten vegetable among consumers, according to the U.S. Department of Agriculture. As The New York Times article noted, potatoes are close to the bottom of healthy vegetable rankings, since they don’t pack the nutritional punch that your average leafy green vegetables do.

Elaine Magee, a dietitian and the author of 25 books about nutrition and healthy cooking, told The New York Times that individuals should “savor the flavor” of the fries as a way to eat mindfully and avoid overeating. “Anything can be eaten healthfully if it’s eaten mindfully,” Magee added. “If you eat French fries that way, you will probably be satisfied with 10.”

Perhaps some people have an iron will and self-control that rivals an Olympic athlete’s, but who can honestly say that they would be satisfied with 10 French fries, let alone six? Savoring the French fry and eating it mindfully would only make me want it more.

Consider the humble French fry. It did not ask for you to label it as a health food. Like all food, it is morally neutral; something to enjoy, to fuel yourself with, something that you can enjoy one, or six, or 20, or however many you want at a time.

It is comforting and reliable, always there when you need it, whether the craving for the French fry’s potato-y embrace hits you after a particularly long day at work, during times of celebration, or just because. I would argue that a longer life, at the cost of being restricted to only eating fries in portions of six, is no life at all.