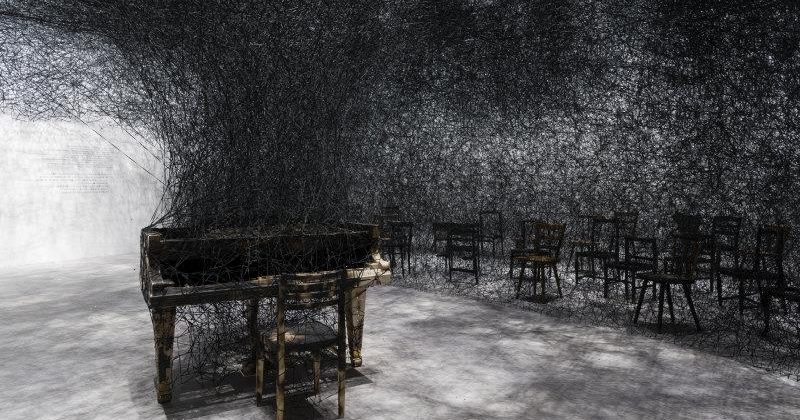 Chiharu Shiota: The Soul Trembles, at Brisbane’s Gallery of Modern Art, is a daring but necessary exhibition for an Australian art museum. Daring, because local audiences have grown so accustomed to a diet of “masterpiece” shows it’s difficult to imagine them flocking to see the work of a contemporary Japanese artist whose name will be unfamiliar to most people. Necessary, because this is precisely the kind of show our institutions need to embrace if we are to break free of our populist habits and commit to showing the very best art from anywhere and any time.

The Queensland Art Gallery deserves praise for taking on a project which is not simply a leap in the dark in terms of audience numbers, but an exhibition set-up of extraordinary complexity, necessitating weeks of hard labour. If these efforts are to be rewarded it will be because of the word-of-mouth factor, which is sure to be strong.

This career survey was put together by Mami Kataoka, for the Mori Art Museum, Tokyo, in 2019. It was scheduled to travel to Queensland the following year but was postponed due to the pandemic. After Brisbane, it will continue to circulate in Asia, testifying to the artist’s growing reputation. 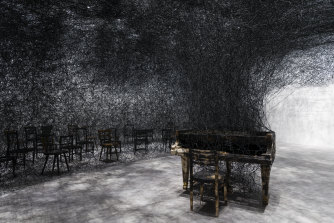 Shiota was born in Osaka in 1972 and wanted to be an artist from early childhood. This would lead to an estrangement from her father, who believed girls should be content to be wives and mothers. She would study art in Kyoto, then Australia, where she spent two years at the Australian National University, from 1993-94. It was in Canberra that Shiota stopped painting and began experimenting with installation, including a string piece that foreshadowed the kind of work for which she has since become known.

At the opening of the GOMA show the artist’s time in Canberra was celebrated, but it seems to have been a lonely, unhappy interlude in her life. Determined to see all of Australia, Shiota travelled by bus to Uluru, Perth, Broome, Darwin and Cairns. Her travels reveal a methodical, obsessive aspect of her personality that would come into full bloom when she moved to Germany in 1997. This period began with a profound mistake, as she thought she was going to study with Polish sculptor, Magdalena Abakanowicz. Instead, she found herself under the thumb of Marina Abramović, the Godmother of performance art, known for putting her charges through the most gruelling boot camps.

Shiota, who has never done anything by half-measures, took on all of Abramović’s strictures, creating works that saw her rolling around naked in front of a makeshift cave, and making daily train trips to an abattoir to collect the jawbones of 180 cattle that she would arrange around a muddy pond, from which she emerged as a movie monster. Some have wondered whether Shiota’s student work may have helped inspire Abramovic’s Balkan Baroque (1997), which found her cleaning bones at the Venice Biennale, in response to the war in Bosnia. 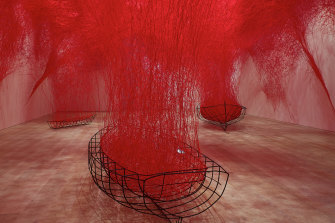 Shiota made a name for herself with these extreme performances, but they were no more than an interlude in her career, and in retrospect may even have been a distraction. She stayed on in Germany and has now spent the largest part of her life in Berlin. She was an unfamiliar quantity in Japan until 1999, when she stole the show at the 1st Yokohama Triennial, with an installation called After That. It consisted of seven muddy dresses, each seven metres high, being drenched in water that never made them any cleaner.

After That appears in this show only in photographic form, but it looks astonishing. From this point Shiota was an artist in demand. From 2005-2018, she was involved in no fewer than 300 exhibitions, with another 27 scheduled for this year. The Soul Trembles is the biggest ever display of her work.

Her signature material is a bright red woollen thread, used to create a dense web in which objects are cocooned or suspended. One might see it as an extended variation on Marcel Duchamp’s installation of 1942, His Twine, in which a Surrealist exhibition was entangled in hundreds of metres of string. Shiota has taken the germ of an idea and made it into a broad-ranging body of work. Already in this country, the Art Gallery of South Australia has a room-sized installation called Absence embodied, while Hobart is the home of A Key in the Hand, the gigantic piece Shiota made for the Japanese pavilion at the 2015 Venice Biennale. The installation, which incorporates 180,000 keys, was purchased by Tasmanian collector Penny Clive. 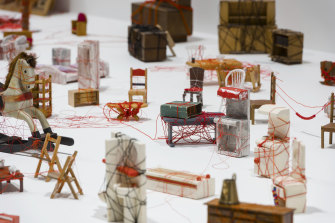 Shiota has filled the cavernous central corridor of GOMA with a work called Uncertain journey (2016-), in which torrents of red thread surge upward from the thin metal frames of boats. Walking through the installation the red fills our field of vision. It’s suggestive of blood or fire. The boats seem to have erupted with cold flames, perhaps as a metaphor for the soul leaving the body.

Shiota’s threads – red, black, and more recently, white – conjure many associations. They are like spider webs, the nerves and arteries of the body, or perhaps the cyber networks that carry information across the planet. When a work is installed in a different space it is reinterpreted slightly differently, like a piece of music. 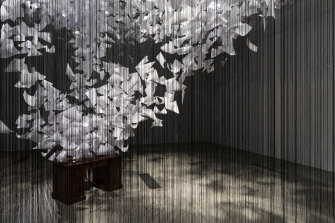 A Question of Perspective.

The installation, In Silence, features a burnt piano amid a dense mesh of black string. The inspiration was a childhood memory of seeing the next-door neighbours’ furniture dumped on the street after their house caught fire. The motif suggests music that has been stilled and silenced, with rows of burnt chairs reducing the audience to an equivalent silence. Like so many of Shiota’s works, the shadow of death is everywhere.

Shiota was making works about death while still in her twenties, but she received an extra impetus in 2005, when diagnosed with ovarian cancer. She overcame the disease and was able to become a mother, but it would return in a more potent form in 2017. She got the bad news from her doctor the day after she had been invited to create this survey exhibition at the Mori. The Soul Trembles was her personal choice for a title.

For the following year, as she underwent an operation and chemotherapy, Shiota suggested works that Mami Kataoka rejected. The curator argued, rightly I believe, that 25 years’ worth of work should not be summed up or overpowered by photos of the artist shedding hair, or chemo bags equipped with twinkling Christmas lights. Shiota’s final, successful gambit was a piece called Out of my body (2019), in which sheets of loosely woven red fabric hover over a set of bronze body parts. The confrontational aspect of her earlier ideas has relaxed into a more oblique, poetic form.

A new room-sized commission for the Queensland Art Gallery, A question of perspective, deals with the mystery of artistic inspiration. It features a desk from which pieces of blank paper rise and remain frozen in the air. We view the work through a curtain of black strings that produces a mildly stroboscopic effect as we move.

I haven’t the space to discuss Shiota’s other installations or her impressive set designs for theatre and opera – including three works by Wagner! Her preoccupation with mortality remains consistent from start to finish, although it takes a multitude of forms. The final piece is a series of video interviews with children from Berlin and Brisbane, in which they relate their impressions of the soul. Some responses display a startling profundity.

By the end, it’s clear we’ve been in the presence of a compulsive personality for whom art-making is not an option but a necessity. Life, death, childhood, loneliness, travel, homesickness, love, illness, ecstasy and sadness… all of human existence is in this exhibition. The most breathtaking aspect is the way Shiota manages the impossible feat of combining high theatricality with a sense of intimacy. Her string installations dazzle our eyes but also offer sanctuary as if we were enclosed within a nest. These large-scale works are deeply personal in the best sense – not a celebration of the ego, but an invitation for every viewer to recognise the same signs and portents on their own life’s journey.

Chiharu Shiota: The Soul Trembles is at the Gallery of Modern Art, Brisbane until October 3.

John McDonald was a guest of the Queensland Art Gallery.