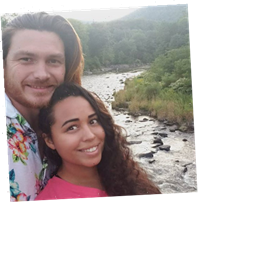 Tania Maduro and Syngin Colchester are really going through it on the fifth season of 90 Day Fiancé: Happily Ever After?. The personal differences between them have driven a major wedge in their relationship and have caused it to deteriorate it to the point where it’s hard to tell if their marriage will make it.

Tania has been vocal about her issues with Syngin and seems to think they would be better off if he just could get it together. But some fans are blaming her for the way things are going, saying she ignored the signs and should have accepted Syngin the way he is. Tania Maduro and Syngin Colchester’s relationship is going downhill on ’90 Day Fiancé: Happily Ever After?’

Tania and Syngin have weathered many ups and downs in their relationship. But things are especially tense in the latest season of the show.

The tension boiled over in a recent episode when the couple traveled to Syngin’s native South Africa to visit his brother. Sitting down for a dinner, Syngin opened up about being homesick and feeling like he was missing out living in America. He has had trouble finding a job and has been really stressed about it since Tania can’t work due to a foot injury. Meanwhile, his wife vented about her own frustrations in their relationship, including Syngin’s lack of direction and conflicting life goals.

The conversation continued to get more and more heated until Tania finally walked away from the table, without ever reaching a resolution with Syngin.

In the Sept. 6 episode of the show, the couple met up with Syngin’s friends Andrew and James. Once their relationship got brought up, Tania began to complain about her partner and the things she said she noticed early on.

“There were so many flags back then,” she said. “Like all these flags that come up now, I think ‘why did I even stay?’ But it was not a big deal at the time.”

Andrew said in a confessional that Tania’s comments proved she was in denial. “You saw it but you just chose not to believe it,” he told the camera. “[Syngin] was completely honest and blatant with everything. You sold yourself.”

As the episode played out, many fans took to Twitter to share their thoughts on Tania and Syngin. A lot of people agreed that she had been in denial and accused her of falling in love with the idea of Syngin instead of him as a person.

“As I have been saying about Tania. Syngin has been the same from the beginning, and Tania knew that. She chose to ignore it because SHE had a timeline, and she expected Syngin to conform. This is why I don’t feel sorry for her. #90DayFianceHappilyEver #90DayFiance,” read one tweet.

“Tania tried to build her dream man without accepting Syngin for who he is…now she is in this situation and wanting to control everything #90DayFiance #90DayFianceHappilyEverAfter,” read a second tweet.

A third person chimed in with similar comments, tweeting: “TANIA IS SELFISH!! None of these issues were a problem when she was ignoring Syngin and living it up in Costa Rica!! KARMA B*TCH!!”

But at the same time, there are still some viewers who love the couple and are hoping to see them go the distance. Tune in to TLC at 8 p.m. on Sundays to see what happens with them from here.