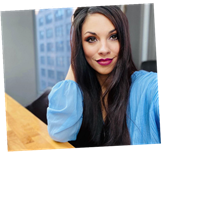 90 Day Fiancé couple Avery Warner and Ash Naeck broke things off after their time together on the show. However, the two seem to have remained friends on social media, with Naeck even sticking up for Warner when her parenting came under attack. Now, some fans believe the two might actually be back together again following some interesting interactions on Instagram.

A quote from the wonderful @doctorshefali ☀️🌈 . When you parent, it’s crucial you realize you aren’t raising a “mini me,” but a spirit throbbing with its own signature. For this reason, it’s important to separate who you are from who each of your children is. . Happy Sunday ☀️☀️☀️ . . . . #consciousparenting #sonanddad #funtimes❤️ #funtimes #goodvibesonly✨ #spiritualgrowth #parentinghacks

90 Day Fiancé stars face a lot of rumors and gossip on social media, and Avery Warner was no exception. The reality star recently dealt with attacks against her parenting circulating on Instagram.

Claims against Warner’s parenting suggested that she doesn’t “call, see or support [her eldest] daughter financially,” and suggested she’s essentially an absentee mother.

Ash Naeck stepped up to defend his 90 Day Fiancé co-star, even when things didn’t work out between them on the show. In a lengthy post, Naeck wrote in part, ““Reading the 10 truths about Avery written by her ex husband, it is hard to sit on the side line and not voice myself. I don’t know the ex husband but I know Avery and I have seen her care, love, support and fight for her kids. The 10 apparently truth are 100% questionable which may be taken as a form of defamation towards a public figure [sic].”

Naeck added, “I can share that she is an outstanding mum, conscious, caring always putting her little one first. Avery goes out of her way to make sure Sylver is seen, heard and loved and the way she parents her daughter is beautiful to watch. The amount of love she gives Sylver is beyond this world.”

This mama just got the keys to our new place ❤️❤️🍾🍾. We love it! But I’m particularly obsessed with the kitchen 😍😍😍. Happy Friday everyone!! #newapartment #newhome #homesweethome

90 Day Fiancé fans may have noticed that Ash Naeck and Avery Warner recently started following each other on Instagram again. And the two are also liking each other’s posts once more.

This has some folks wondering if they might be getting back together, or if they’re simply solidifying their friendship following their failed relationship.

One detail that has some fans feeling extra suspicious is that the two recently shared the same post to their Instagram stories. The image features a mother lion carrying her cub the same way from two different perspectives. In one, the cub looks fine. From the other angle, it looks like the mother is eating her cub.

The caption reads, “Your perception of reality depends on what you see and are shown.” Between the mutual following and likes, and the same shared image, some 90 Day Fiancé fans are wondering if there’s a hidden message here. Are Ash Naeck and Avery Warner feeling, as Tom Brooks might say, a “romantic notion” for one another?

If that’s the case, many fans seem unimpressed. One Redditor wrote, “I would think BOTH of them saying ‘I will never be with that person again’ and Ash admitting that he’s a liar would have solidified that break up. But if the D is THAT GOOD that you can’t resist even from another continent…. well then good for Ash, I guess. They deserve each other.”

Another suggested that they didn’t seem finished with each other yet on the show. They added, “Neither of them sounded fully over the other one at the tell all.”

One Redditor said, “I’d lose a lot of respect for her tbh.”

“They’ve already broken up and gotten back together 10 times. What’s one more?” joked another commenter.