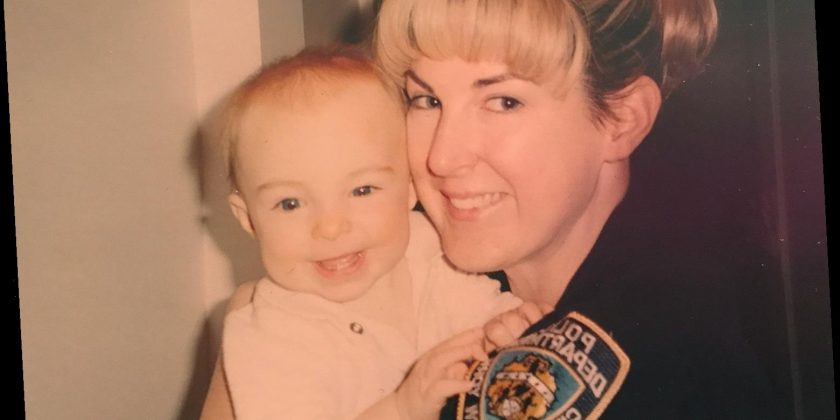 Retired detective Debra McCarthy did a double take when she was walking through New York Police Department headquarters in the days following the 9/11 terror attacks.

Standing in the main area of the narcotics division, where McCarthy worked, was a female sergeant in full dress uniform with blonde hair and green eyes — just like her own.

“I turned to a friend of mine and said, ‘Oh my God. This woman looks just like me,'” McCarthy, 51, a married mother of three from Long Island, tells PEOPLE.

Adopted when she was 2 years old, McCarthy had always wanted to find her birth family but had never gotten around to doing it for fear of hurting her adopted family, especially her adopted mother.

Seeing her doppelgänger inspired her to finally start searching for her family of origin, at age 30. So did the location of her office at One Police Plaza, from where she could see the giant pile of rubble at Ground Zero, just blocks away.

“We could see the area that was the World Trade Center from the window,” she says. “So we were living that every day. I was assigning men and women from the narcotics division to go to ground zero and dig out the dead."

“I had a deep desire to find my birth family because I knew my biological mother had been a securities trader," she adds.

That, in addition to seeing the sergeant who bore such a striking resemblance to her, “just made me say, ‘Hey, I’ve got to find my birth family. I may have had family down there,'" she recalls.

For McCarthy, working near the spot where the Twin Towers had collapsed was one stark reminder of the importance of family and loved ones.

So were the 87 friends and family McCarthy and her husband, FDNY Battalion Chief Thomas McCarthy, lost that horrific day.

On the morning of the attack, her husband rushed to the command center the fire department had set up at the World Trade Center to help coordinate what was, at that moment, a search and rescue effort in both towers.

She and her husband lost relatives and friends they’d gone to high school with, worked with and who’d attended their wedding.

“The horror of losing that many beautiful souls in one day is indescribable,” she says.

McCarthy had just had her first child and was on maternity leave when the terror attacks rocked the nation and the city.

“I was bringing the baby to these funerals,” she says. “It really makes you start thinking about life and the importance of family.”

While McCarthy’s husband spent the next weeks and months looking for bodies in the rubble, she began to search for her birth parents.

Having worked as a police officer for three years and an undercover vice and narcotics detective for seven years, she put her well-honed sleuthing skills to use and first found her birth mother.

Her birth mother told her that she was an only child and that her birth father, Charlie Sullivan, had been searching for her for years.

“My mother said, ‘Your father has called every year on your birthday for the past 30 years,’” she says. “He wanted to make sure that if I got in touch with her that he would be notified.”

When McCarthy finally met her birth father, she learned that he lived in Breezy Point, an Irish enclave in Rockaway Beach, where she’d begun her career as a patrol officer. “When I reached him and told him I used to work in the 100th precinct, he said, ‘Darling you have been passing your family’s house every day,’” she says.

Weeks later, she and her father planned a get-together in Breezy Point, where she met an endless array of Irish and Italian aunts, uncles and cousins.

During the reunion, she and her extended birth family stood on the beach in Breezy Point overlooking the Manhattan skyline, where her “Aunt Mary and Uncle Patsy” Sullivan had witnessed the collapse of the Twin Towers — and where their son, Patrick Sullivan, and their nephew, Peter Milano, both of whom worked for Cantor Fitzgerald, were killed. “As we stood there, my aunt and uncle hugged me and said, ‘We lost our son our nephew in the attack on the Twin Towers. We lost so much that day, but now God has reunited us with you and your little family. You came at a good time.'"

That’s not the only person with whom she was reunited.

The woman in full dress uniform that she saw that day at One Police Plaza turned out to be her cousin, Sgt. Mary Young, who was on her way to the funerals for Sullivan and Milano, the cousins McCarthy didn’t know she had.

“I’m extremely grateful for having been embraced by my birth family after they had such tragedy in their own lives,” says McCarthy. “They were so willing to embrace me and my little family and welcomed us with open arms. They are extremely giving and kind people and I am lucky to be a part of their lives now.”

So much happened that day that was bad, she says, “but this gives people a glimmer of hope, that good things happened, too."

“This is a story of loss and love," she adds, "and never giving up on finding family.”