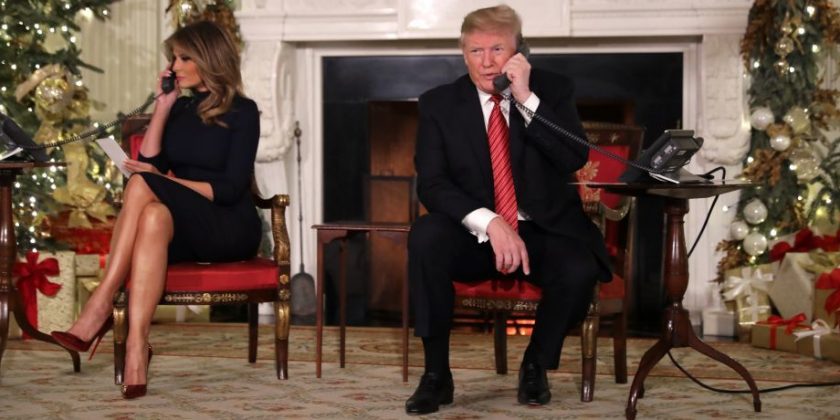 For 7-year-old Collman Lloyd, belief in Santa Claus is anything but marginal.

The South Carolina girl was thrown into the national spotlight on Christmas Eve when she was surprised with a phone conversation with President Donald Trump, who was manning the phones for the NORAD Santa Tracker and happened to take the little girl’s phone call. Collman wanted to know exactly where in the world Santa was at that moment, but instead she had her belief in Jolly Old Saint Nick thrown into question.

As the Post and Courier reported, Trump asked a question during his call with the girl that would spark controversy.

“Are you still a believer in Santa?” the president asked.

In a later interview, Lloyd admitted that she didn’t know what the word “marginal” meant. The question led to some criticism of Trump, including the New York Times which took the president to task for nearly shattering the belief of a 7-year-old girl. But the report did note that the president was largely accurate in his assessment of when children lose their belief in Santa Claus.

“Most children stop believing in Santa somewhere between 5 and 8 years old, according to several studies,” the report noted. “That range has been largely consistent for decades; a 1978 study said that 85 percent of 5-year-olds believed, while just 25 percent of 8-year-olds kept the faith.”

There are some differing accounts, however. While studies taken directly of children indicate that they lose faith at earlier ages, usually between 5 and 8, adults tell a different story. When these studies asked adults to recall when they stopped believing in Santa, they noted a much later age, usually between 9 and 12.

Some noted that the prevalence of the internet today makes it much easier to find “spoilers” about Santa Claus, and social media makes it easier for children to share their ideas. And that is saying nothing of unexpected phone calls with world leaders who publicly question whether a child should still be believing or not.

But Collman Lloyd said she is still very much a believer in Santa Claus, and after her phone call with Donald Trump she and her siblings put out sugar cookies and milk for Santa. As the report noted, the cookies were gone the next morning and a new American Girl doll was under the tree, with Lloyd’s belief firmly intact.