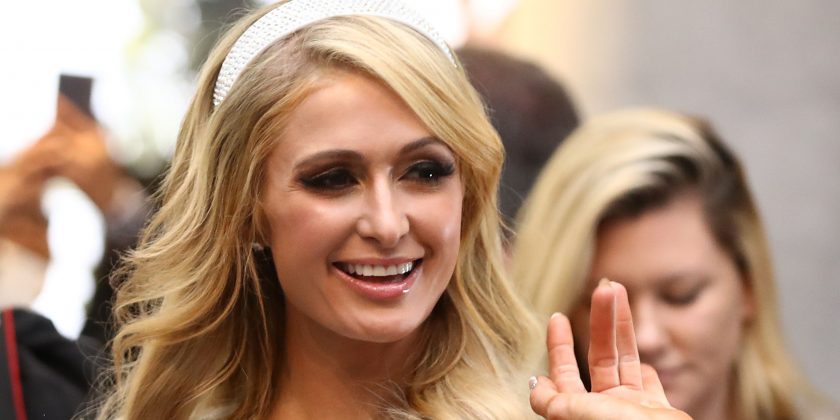 Paris Hilton tweeted that she and Britney Spears invented the selfie. It didn’t take long for Twitter users to fire back and disprove her claim. Buzz 60's Chandra Lanier has the story.
Buzz60

Netflix’s new documentary “The American Meme” (streaming Friday) is a cautionary tale of what happens when people sell their souls to become Internet stars. But one figure appears in the Netflix documentary to remind us this is nothing new.

Paris Hilton was the OG internet star, “American Meme” declares – the pre-Instagram Kim Kardashian. She was a viral sensation before the rest of the world knew it was possible to capitalize on a global fan base.

Hilton previously made headlines for the documentary back in April when it premiered at Tribeca Film Festival: In it, the heiress, 37, says her infamous 2004 sex tape leak felt “like getting raped.”

“It felt like I’d lost part of my soul and been talked about in such cruel and mean ways,” she says. “I was like, ‘I just don’t want to live,’ because I thought everything was taken away from me. I didn’t want to be known as that.”

Here are five more anecdotes from “The American Meme” that will change the way you think about Paris Hilton:

1. She considers herself extremely close with her fans.

Hilton’s morning routine starts with a sweep of her social media accounts (stars – they’re just like us!), where she reads fan comments and watches videos they send her.

“I feel closer with them than I do with most people I know,” she says. “They’re really like my family.”

Hilton confesses her parents don’t understand why she interacts so personally with total strangers: She says she gives fans her phone number and even invites them to stay in her house.

“I’m constantly traveling … so it gets really lonely sometimes,” Hilton explains. “I’ve been through so much in life and I don’t really trust people. I’ve just grown accustomed to being (expletive) over. But with my fans, I don’t feel like that at all. Not a day goes by when I’m not texting, FaceTiming or emailing with my Little Hiltons.”

So great reuniting with one of my favorite #LittleHiltons @ParisSlaysUrFav. Love you Raul. ? You are so talented, creative, intelligent, sweet & genuine. I’m so happy to have you as my friend. ❤️

2. She hears paparazzi even when she’s alone.

Hilton has been in the limelight for so long, it seems scenarios with lots of photographers are burned into her brain.

“It is weird,” she says. “Sometimes I’ll just hear clicks and flashes even when they’re not happening. Just over the years, especially if I’m at, like, Cannes or something like that. When I’m walking to my hotel room and there’s no one, I’ll hear this noise forever.”

3. She nearly had a panic attack before shooting her first real movie role.

Even after years of being surrounded by cameras, Hilton still found the idea of shooting a movie daunting. Her first big starring role on the big screen was in the 2005 horror flick “House of Wax,” which also featured Chad Michael Murray and Jared Padalecki.

“I just remember being so nervous before the scene and almost having a panic attack,” Hilton says. “It was the first, like, serious film I had done … but then when I got on set, I used all that nervousness” for the character.

The reason you still see her popping up at clubs and music festivals all the time is because she can’t bear the thought of missing an event, she confesses.

“Yes, I’ve built a big empire and a huge business, but I don’t know, sometimes I’m like, ‘Do I even want to do this anymore?’ ” she says. “I see all my friends who are not in the industry and they now have two or three kids and they’re so happy. They don’t go out, they’re just with their families and that is what makes them happy.”

#SoundCheck ??? Tonight is going to be #Lit?

5. … but part of her knows she’s created a bit of a monster.

Hilton has spent the past 20 or so years of her life as one of the most famous people on the planet. And while she’s thankful for the brand she’s been able to create, she’s also aware of how it stunted her own personal growth – and how it’s impossible to escape.

“I just lived in this bubble,” Hilton says. “The reality show world – that whole industry – you don’t really grow up. You’re almost stuck in this character. I (have been) a 21-year-old for the past two decades. … It’s like ‘Groundhog Day.’ Everything I do is just the same (expletive), different day.

“I already do have a legacy, but once you start, that you just can’t stop,” she says. “A lot of people don’t understand that you need to be sustainable forever.”