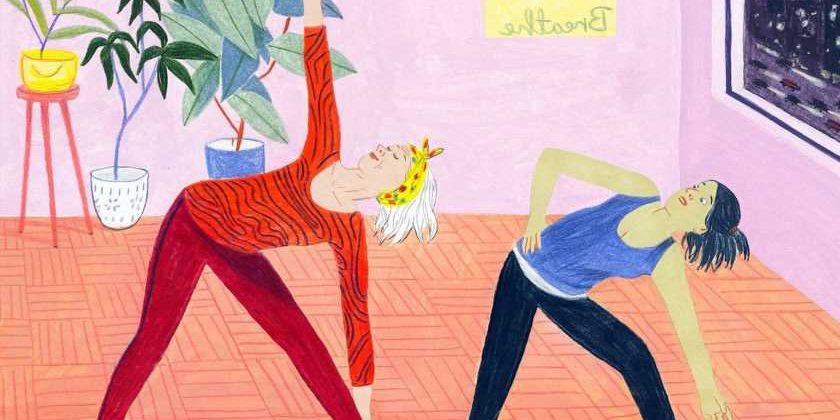 Want to find new friends? Perhaps it’s time to look outside of your usual circle. Here, 10 women explain how having friends of different ages has enriched their lives, from offering differing views on politics to battling loneliness.

There’s no denying that our  friendships form some of the most important relationships in our lives, with our friends often helping to shape the very fabric of our personalities and identities.

But our collective journeys through education systems and typical career progressions have embedded us into societal patterns that encourage identical age, status and stage-of-life interactions. So are we missing out on the value of deep, intergenerational friendship?

In an exploration of greater wellbeing and fullness of life, Stylist invites five female duos into conversation to share their unique experiences of age-gap friendship.

Friends: Nicola Heathcote (left) 32, a singer and creative copywriter, moved in with Anne Willan (right) 80, a writer and chef

Nicola Heathcote (left) 32, a singer and creative copywriter, moved in with Anne Willan (right) 80, a writer and chef, when she joined a home-sharing scheme five months ago.

Nicola: My friendship with Anne doesn’t really differ to the friendships I have with people my own age. We talk about the same kind of things – how our days have been, what’s going on in the world and so on. And we enjoy doing things together like watching Netflix, going to the cinema and eating out. However, in other ways, our friendship is very different. It has opened doors to new experiences and perspectives, for both parties, in ways that someone who has lived a life similar to your own may not be able to do in quite the same way. Also, because of the age gap, and because we live together, Anne feels like more than just a friend. She also feels like family, and a mentor.

Anne: I was surprised how lucky we were that we both enjoy the same things. We like to eat more or less the same food and we like to look at – and this may sound silly – the same television programme shows, so after supper we sit and watch House of Cards together. Plus we take a similar view of politics; it’s very interesting to talk to someone of Nicola’s age and hear what she thinks of all these politicians, like Trump. We always have a good laugh and usually agree on most things.

N: Anne’s an inspiration – she’s 80, but she has more zest for life than a lot of people over half her age. She has also had an extraordinary career in the culinary arts and is recognised as one of the world’s preeminent authorities on French cooking. She founded the legendary La Varenne school of cooking, and has written more than 30 cookbooks. So she has also taught me a lot about food and cooking!

A: Nicola is very open-minded; it’s a pleasure to have someone around who’s in a totally different field from me. We both have great respect for one another’s specialties and she has great respect for my space.

N: I strongly believe that intergenerational friendships can contribute to positive mental wellbeing. It’s a great way to tackle loneliness, which can lead to depression, and this applies to both generations. I couldn’t have agreed with Jo Cox (the late Labour MP) more when she said: “Young or old, loneliness does not discriminate”.

Amy Choi (left) 39, and Stephanie Scott (right) 25, met at a local Korean restaurant earlier this year before realising that they were, coincidentally, very close neighbours.

Stephanie: Most people in Amy’s generation are married with kids, especially in Korea. But she doesn’t fall into that category – she just lives according to her own free will and enjoys life as it comes, without the pressures of marriage. It’s refreshing to see. Amy is like an older sister without being over protective.

Amy: I find that most people in Steph’s generation are quite selfish and don’t take much interest in other people’s problems. But Steph is someone who cares a lot about people and will always tries to help them when they need it. She’s overly energetic but has a similar sense of humour to my Korean friends. In Korea, in order to form a good friendship, you need to fully understand each other’s cultures so you can relate properly to one another.

S: We’ve found that there’s no limit to how open minded we can be, especially when it comes to interacting with different people. I’m a British African 25-year-old Londoner and Amy is a 39-year-old Korean migrant; we’re an unlikely pair! But we can just be ourselves around each other. Our conversations are usually about common interests, such as salsa dancing because we both love to dance.

A: Spending time with someone from a younger generation reignites that excitement and youthfulness in me again, because Steph’s energy rubs off on me. She always brings new and exciting things to do when we meet.

S: Our friendship shows us how to handle situations in multiple ways. Through spending time with people from different generations, you realise there are other ways to handle a situation or decision, particularly when you are approaching a junction in your life.

Rae Tweedale (left) 32, make-up artist, became friends with Agzie Carey (right) 16, a student, when she moved in as a lodger to Agzie’s family home three years ago.

Rae: Spending time with Agzie has given me a real insight into what the next generation are having to deal with. A lot of people my age are really blind to it, or become very quick to criticise, because they don’t know the reality of growing up with social media. People in Agzie’s generation have all these images being pushed into their faces and they can never get away from it all; there’s no safe place.

It’s not been easy, but Agzie is bossing it. The way she thinks about stuff is very unique, and I’m often very impressed by it.

R: Age is important but it’s also just a number. Mixing people from different backgrounds stops you from becoming narrow minded. I think I’m actively seeking out friendships with people who aren’t my own age now because I’m trying to build my own type of family.

Shaffra: Being at different stages in life doesn’t affect our friendship – if anything, it strengthens it. Simone is a successful nurse and public speaker with two incredible grown-up sons, but she’s forever trying different things and taking up new ventures. For example, she recently launched her own events company, so she’s still putting all the pieces of her jigsaw together; like all of us! We can learn from each other’s experiences because they’re all wonderfully unique.

Simone: Our friendship benefits us both. I take on a big cousin role and advise Shaffra where I’ve gone wrong in life, and try to help her avoid kissing as many frogs as I have. Then Shaffra brings the cool into my life as she is so effortlessly fashion-forward. It’s such a boost to my confidence when she tells me how good I look.

Shaffra: It’s true that with age comes wisdom, but it also brings self-assurance, sincerity and realness – something that people of my age are yet to fully grasp. And because of this, Simone is like three things in one: a friend, a sister and a mother.

Simone: Shaffra differs from my other friends as she is very free-spirited and outgoing. She showed this recently by going to a festival completely alone – that seems very brave to me, but it’s just who she is. Her circle of friends is very varied, which is testament to her inclusive and non-judgemental character.

Shaffra: No matter what age you are, you still have lots of learning to do, and having a friend in a different generation can really add some colour to that learning. You see things from both worlds – Simone can look at me and help put my life’s picture together.

Simone: My advice for people is to seek friendships that are going to hold you accountable to your greatness. Always be open to learning from people. Shaffra is a true God-send and if I had not entered into a friendship with her I may have missed many great gems of advice, love, joy, laughter and even tears. I love her dearly.

Rebekah: When you’re 16 you think ‘I know the world’, but then you get a bit older and realise you don’t know anything about the world! When my friendship with Katie began she felt like a big sister, but as we’ve gotten older we’ve stopped seeing the age difference as much. We can be quite real and honest with each other, which has helped us develop a friendship based on trust.

Katie: Rebekah has a wisdom beyond her years, so even though there’s an age gap of almost 10 years between us, I can speak to her as if she’s on my level. I’ve always gone to her for life advice because she has an amazing sense of right and wrong.

R: Katie is now married and expecting a baby, so she has taught me a lot about navigating how to be a woman and be independent, as well as how to be in a relationship. She’s taught me not to rush life and just tick the boxes, but to enjoy it and savour the moment I’m in. That’s been really good.

K: It’s refreshing to have a friend who isn’t married or having a baby, and who has a lot of freedom in her life. As you get into this stage of life, your friendship groups narrow, so you’ll just be hanging out with couples who have kids. It’s good to have a friend who isn’t part of that lifestyle because otherwise things can get a bit boring, and you end up talking about the same stuff over and over. There’s so much more to know than what we are personally experiencing at any one time.

R: Katie and I can learn from each other because we’re not the same; we don’t come from the same culture or the same background, and we have completely different experiences. It’s really quite fun.

K: I just find real joy in our friendship; Rebekah brings interesting factors into my life instead of everything being the same.

This piece was originally published in June 2019