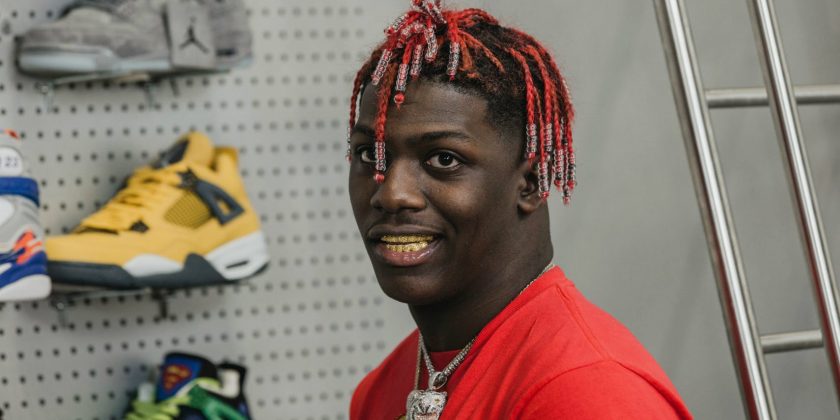 The rap community is steadily growing, with new rappers being discovered every year. One of these rappers is Lil Yachty (also know as Miles McCollum to his OG fans). Lil Yachty was discovered in 2014 on SoundCloud when one of his songs went viral, and he’s never looked back. The young rapper has also developed a love for expensive shoes. Many people that have the money like to collect rare and expensive shoes, and Lil Yachty’s collection is crazy. Here are his most expensive pairs!

RELATED: Watch The Throne: 10 Most Expensive Timepieces In Jay-Z’s Collection

Nike has many different lines and collection for their creations. These include Jordan, Air Jordan, and Off-White. They also have the retro line, where they bring back older versions of popular shoes. Some of them are revived from the 80s and 90s, some could be revived even though they may be relatively new. This pair of shoes was revived as a set, along with another pair. Lil Yachty shows the crew from Complex the shiny box with two pairs of pristine and untouched sneakers in it.

Since the companion pair was featured just above, we figured that it might be a good idea to talk about these, as well! The shoes were originally sold separately and were popular enough to earn their own inspired line of clothing, which are still being sold on the Nike website today. Of course, after doing the retro version of the shoe, Nike released the set. Even though we have the shoes priced separately, if you have the set together, they can be worth up to about $1,700, which isn’t too bad!

Nike’s Blazer line has been around for a long time and there are many different variations of them. The line usually ranges in price from $120 to $200. In 2017, though, there was a relaunch of shoes that had once been discontinued. It was called “The Ten” collection and was a collaboration between Virgil Abloh and Nike, featuring shoes like the Nike Blazer Mid as well as the Nike Air Force 1 sneakers. The collection was limited, which is what makes these shoes so expensive.

Since Lil Yachty revealed his possession of these shoes during a shoe closet tour with Complex in May of 2018. The 1994 Jordan 1 Retro Bred sneakers have since gone up in value by about $500, which is quite a price jump. During his shoe tour, Lil Yachty pulls a box off the top shelf and shows the original price tag before opening it. The price read just $79.99. It’s surprising that he opens the box to reveal a now $1,300 pair of shoes. Just like most of his collection, these shoes are older than him!

These shoes were given exclusively to the cast of Scrubs, a show that began airing in 2001 and continued to air until 2010. The show was very popular and even had a companion show that was scheduled to air right after new episodes of the parent show were played. Even though the shoes were only made for the cast of the original Scrubs TV show, there were prototypes that some people managed to get their hands on. Lil Yachty is one of those people. Those prototypes are now being sold for at least $2,000.

Originally priced at $150, these shoes were also a part of “The Ten” collection that was launched in 2017. Just like the Blazer Off-Whites, these shoes were also discontinued and brought back in 2017. Since “The Ten” was a temporary revival, these are an especially rare and expensive pair of Retro shoes. They can be auctioned off at about $2,500, and sometimes more, on shoe enthusiast websites, as well as eBay. They are not as rare as some of the shoes on this list, but Lil Yachty definitely treasures his pair, no doubt.

These limited-edition shoes were produced and sold in 2006, but only a small amount was distributed. In Complex’s YouTube video, Lil Yachty shows that only 150 pairs of the shoes were made, according to the tag on the inside of the shoe. The young rapper managed to get pair number 67 but jokes that he regrets that he did not get pair 69. There have been newer versions of the shoes, and they have been successful, but since these are the first ones ever made, nothing can top them!

Coming out in 2014, these Nike Air Jordan 1 Retro Fragment shoes were once priced at $185 but have since skyrocketed in price. Lil Yachty owns three pairs of these shoes, two of them unworn and in amazing condition. When in great condition, but opened, these shoes can go for about $3,700, but if not, they could be worth as little as $500. Either way, a pretty penny can be made off them. On eBay, they are being sold for as high as $7,757 (wrapped in plastic and still in their box).

The collaboration between Louis Vuitton and Kanye West as a great success. The shoes sold for about $1,100, but have now increased in value by almost 6 times the original value. Louis Vuitton is known for his expensive clothing for men and women, which includes designer shoes and accessories. Lil Yachty is just one of the many celebrities, along with Jaden Smith, Jennifer Lopez, and the Kardashians who enjoy the luxury clothing items that Louis Vuitton has to offer. The shoes were also released as a lower cut version that is worth $65,000!

The classic 1989 film Back to the Future 2 was and is a very popular movie in the 80s. The movie predicts what the world will be like in the year 2015; there are flying cars as well as hoverboards. There was one thing they got right, though; the awesome self-lacing sneakers that were worn in the film. The shoes were first made in 2016 and were given to Michael J. Fox, who played the main character of Marty McFly in the trilogy. These incredibly expensive shoes have different versions, but these are the most valuable.