Like many climbing plants, wisteria requires vigorous pruning to keep the stunning purple flowers growing in abundance. While most people know to do this in August when the flowers are at their peak, many gardeners make the mistake of over-pruning the plant and sacrificing the enchanting blooms. According to Tom Hilton, indoor gardening expert at National Greenhouse, five buds is the optimum measurement for pruning wisteria, but why is it so crucial?

Wisteria looks spectacular in the summer when the sprawling vines become covered in purple blossoms.

While the charming display of foliage and flowers is a sight to behold, it can quickly fade away if old growth is left unpruned.

Speaking exclusively to Express.co.uk, Tom Hilton, indoor gardening expert at National Greenhouse said: “Wisteria can be one of the most stunning garden features, but the cost of having these botanical beauties is a lot of elbow grease!

“After your plant has begun to flower, around July or August time, it’s time to break out your clippers and get to your garden.” 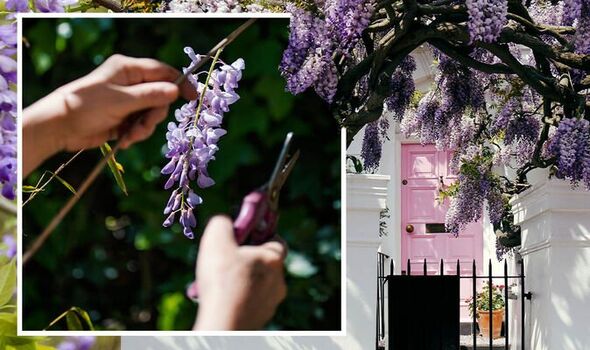 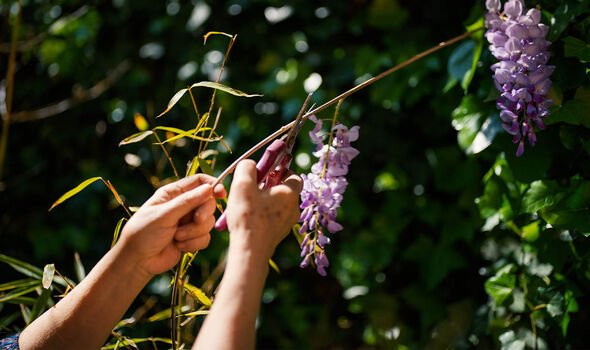 How to prune wisteria

Like most climbing plants, wisteria responds best to a thorough prune, but it is important to avoid over-doing it with the secateurs to avoid damaging your plant.

According to Tom, the five bud rule is a great way to measure the amount of growth you need to remove from your wisteria.

He said: “Pruning around five buds is a great amount, as it leaves plenty to continue growing while encouraging flower growth, rather than a continued expansion of the plant itself.

“It’s also the best way to keep your plant in check, not just to prevent it from overgrowing, but also to keep it looking tidy and presentable.” 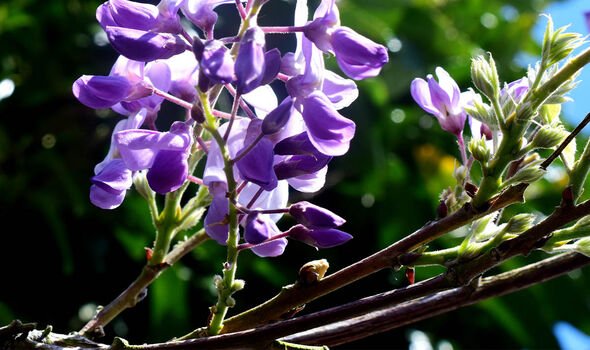 New growth isn’t the only benefit of pruning wisteria. In fact, the technique can have a significant effect on the structure of the plant too.

“Pruning controls these highly vigorous climbers, concentrating growth into a permanent woody framework covered in masses of short side shoots which will be crowded with flowering buds.”

Though it is important to apply the “five bud rule” to long stems, Annelise noted that any shoots which are already shorter than this can be left alone.

In most cases, five buds is equal to around 20cm.

She added: “These will be non-vigorous shoots which are naturally becoming woody and developing lots of flower buds by themselves.” 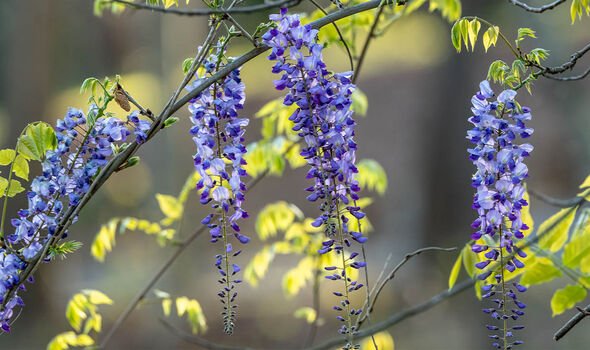 Even if your plant looks untidy before the flowers appear, Tom noted the importance of waiting until the peak of the blooming season to get cutting.

He said that August was the best time to prune wisteria as it is effectively the end of the flowering phase and is the perfect time to “refresh” the plant as a new life cycle begins.

He said: “Pruning allows you to direct the growth of new buds on the path you want them to take, rather than them potentially taking over your garden or the side of your house.

“This summer trim also means there is less foliage on the plant that leaves the lower plants in shadow. Doing this allows you to get the most out of the summer season.”

How to prune wisteria safely

Cutting each stem back to five buds is very self-explanatory but safety should always come first before you get stuck in with the secateurs.

In most cases, wisteria grows at a height which can’t be easily reached from the ground.

To access wisteria clothed around houses, walls and tres, Annelise warned against overbalancing on ladders by trying to pull out long, entangled shoots.

She recommended cutting them into sections instead, and getting someone to foot your ladder if you are unsteady.

As a top tip, Annelise said: “Invest a secateur holster which you attach to your belt, leaving your hands free for climbing the ladder and removing stems.
“This makes pruning at height both easier and safer.”