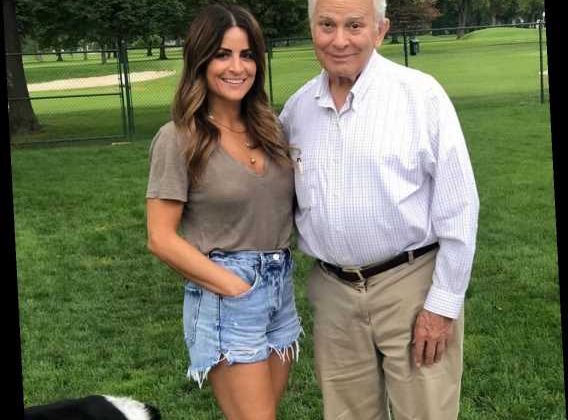 Windy City Rehab host Alison Victoria is mourning the death of her father.

On Tuesday, the 39-year-old HGTV star announced in a heartfelt post on Instagram that her dad has died.

"My Father. Newsboy, Boy Scout, FBI Agent, Public Defender, Federal Judge, but above all, Dad," she began her caption alongside a series of photos of her dad. "A principled man whose extraordinary work ethic was exceeded only by his dedication to his children."

Victoria continued: "He showed up. Without hesitation. Without reservation. He was just there to support and soak it all in with so much pride for his children. His work ethic was infectious and he retired at the age of 84 as a Federal Judge. He was a man of many many words and he would tell them ALL to you in one meeting. He left a lasting impression, as well as his knowledge and wisdom, with all he met."

"He was so proud and so unconditional with his love and support for us," she said. "He was the epitome of a great father and he will be greatly missed. Rest In Peace Dad and may your memory be eternal. I love you and promise to keep making you proud."

The interior designer concluded her post with a quote from 13th century Persian poet Rumi: "Don't grieve. Anything you lose comes round in another form".

Victoria's post was flooded with comments of condolences from her followers, including fellow interior designer and HGTV star Nate Berkus, who wrote, "We are so sorry to hear this ❤️❤️❤️."

The death of Victoria's father comes after a tumultuous year for the star, professionally. Three months ago the owners of a house featured on Windy City Rehab attempted to freeze the TV host's financial assets amid an ongoing lawsuit.

According to court documents obtained by PEOPLE in late October, Anna and James Morrissey, who purchased a house featured on season 1 of the HGTV series, filed a motion on Oct. 8 to prevent the designer from "dissipating her assets, including selling any property which she owns or controls."

The Morrisseys' filing alleges that Victoria (whose full name is Alison Victoria Gramenos) recently transferred ownership of her own $2.295 million Chicago home to a new company, which she co-owns, for $10. The house was then listed for sale. The couple claim this was done to "fraudulently conceal" her assets and requested an injunction that would prevent her from selling it.

Victoria's attorney Daniel Lynch opposed the motion and, according to him, a Chicago court has sided with the star. The Morrisseys first filed a lawsuit against Victoria; her former business partner, general contractor and developer Donovan Eckhardt; and others in December 2019. The couple filed a new suit on September 20, adding the production company for the show, Big Table Media; and Discovery Inc., which owns HGTV, to the list of defendants.

According to the original complaint, the $1.36 million home has faced "leaks and water penetration" from the windows, walls and ceilings — including an upstairs shower that allegedly "drained through the kitchen ceiling whenever it was used." A "crooked" front door, crumbling exterior mortar, issues with garage floor and roof were also cited in the legal document.

The property's rehabilitation was chronicled on a January 2019 episode of the show, with stand-in actors reacting to the remodel's reveal since the Morrisseys did not want to appear on camera, according to the Chicago Sun-Times.

Attorneys for the Morrisseys declined to comment at the time.