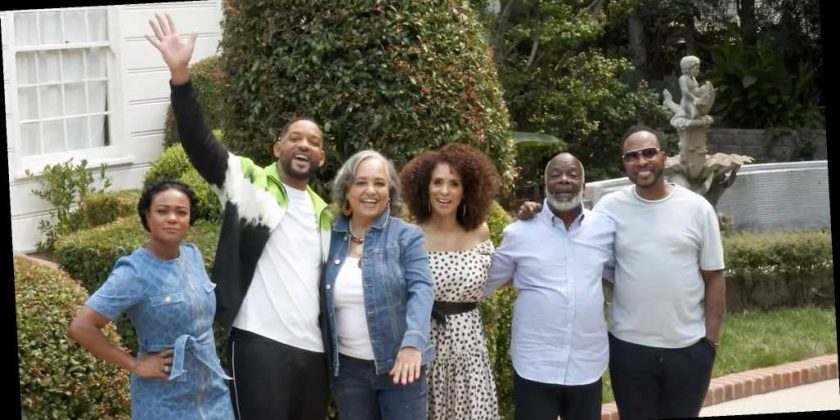 Will Smith and the cast of The Fresh Prince of Bel-Air are taking a (literal) walk down memory lane.

In a 5-minute YouTube video shared on Monday, Smith, 52, reunited with some of his former castmates for a tour of the iconic Bel-Air mansion from the beloved '90s NBC sitcom.

The Los Angeles home is available for rent on Airbnb for five different dates next month for just $30, a nod to the show's 30th anniversary.

During the virtual tour, Smith and his close pal, DJ Jazzy Jeff, took a stroll through the massive residence, which includes iconic memorabilia from the series. ″Alright I'll stay. I know it's supposed to be for other people, but I need this for myself,″ Smith said.

As the pair goofed around the property, Smith said of the home, ″To walk through the door and walk in, it has beautiful nostalgic value." Together, the group signed one of the home's walls and admired a portrait of James Avery (Philip Banks), who died in 2013.

The Bad Boys star went on to talk about how the Banks family and their TV home represented an image of dreams and possibilities.

Smith also shared part of the video tour on Instagram, writing, ″This was the first time @djjazzyjeff got to spend time in the @freshprince mansion without gettin tossed! Loved working with the squad at @airbnb. Bookings open tomorrow."

This was the first time @djjazzyjeff got to spend time in the @freshprince mansion without gettin tossed! Loved working with the squad at @airbnb. Bookings open tomorrow 🙂

Airbnb announced earlier this month that Smith will host guests for five separate one-night stays at the Bel-Air mansion on Oct. 2, 5, 8, 11, and 14.

During the stay, the lucky guests will live in his character's wing of the mansion, which includes his luxurious bedroom, a full bathroom, pool area, outdoor lounge and dining room. They'll be allowed to "indulge in a few royal perks," like raiding Will's closet for some of his iconic outfits, including a new pair of Air Jordans. The Airbnb listing is only open to groups of up to two people who are Los Angeles County residents and currently live in the same house.

Fans that meet the qualifications can request to book the Bel-Air mansion starting at 11 a.m. PT on Tuesday, according to Travel and Leisure.

Airbnb will also be making a ″one-time donation″ to a local organization in Smith's hometown, the Boys & Girls Clubs of Philadelphia, which is ″a program that supports youth, including those in greatest need, by offering development and skill-building programs, recreational activities and empowerment tools.″

Smith revealed earlier this month that the Fresh Prince cast will further commemorate the show's anniversary with a ″real Banks Family Reunion" coming to HBO Max.

Fresh Prince, which premiered in 1990, followed Smith's character, Will, after his mom sent him away from Philadelphia to live with his Uncle Phil in the wealthy neighborhood of Bel-Air.

The actor is also currently working on a two-season dramatic reimagining of Fresh Prince as a series adaptation of Morgan Cooper's 2019 fan trailer titled Bel-Air. It's expected to premiere on NBC’s new streaming service, Peacock.