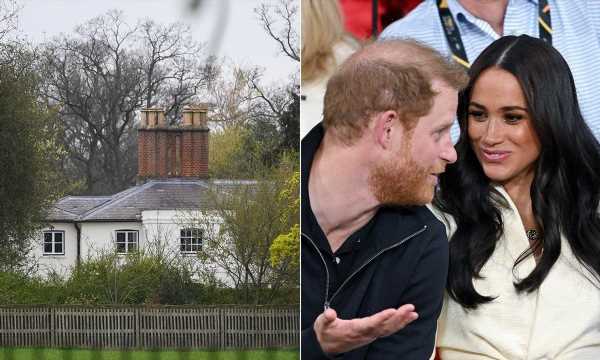 The Duke and Duchess of Sussex are currently living the California dream in their £11.2 million mansion in Montecito with their son Archie Harrison, three, and eleven-month-old daughter Lilibet Diana Mountbatten-Windsor. Before they gave up their royal titles and relocated to the United States, Prince Harry, 37, and Meghan Markle, 40, resided in Frogmore Cottage – and they are planning to return for the Queen’s Platinum Jubilee.

The couple will fly to the UK this week to celebrate the event and are expected to stay at the house located in Windsor. Yet, the house may bring back some bittersweet memories for Harry and Meghan, as they raised Archie there – while little Lilibet has never been to the memory-filled home.

The Duke and Duchess moved into the home in April 2019, shortly before their son was born and continued to raise their firstborn in the house until their decision to move across the Atlantic.

Since the two moved to America, the house has become the residence of Princess Eugenie and Jack Brooksbank. Cousins Prince Harry and Princess Eugenie are said to have a tight bond. “Eugenie and Harry have always been close and they chat privately all the time,” a friend previously told HELLO!. “It was Harry who suggested she and Jack could use Frogmore Cottage because it is much bigger than their cottage at Kensington Palace. It is a case of one family member reaching out to another.”

Across the years, Sarah Ferguson’s daughter has given fans glimpses inside the property as she shares updates on her son August – and she has clearly added some personal touches to the interiors.

The beautiful white cottage sits in front of an incredible lake and Grade-II listed Frogmore House, where the royals hosted their wedding reception in May 2018. Inside, it is reported that there are five bedrooms, a kitchen, a living room and a nursery, formerly designed for Archie with his parents’ input.

Meghan favoured an eco-friendly approach to decorating the cottage

The decoration of the space was of utmost importance to Meghan, who adopted an environmentally-friendly approach to curating the interior of the house. The couple focused on creating the perfect nursery for their royal baby boy and Meghan was reportedly keen to use vegan and organic paint.

With the Jubilee around the corner and the highly-anticipated return of the California-based royals, we’re hoping the family can make plenty more special memories with Lilibet at the covetable cottage which holds so much family history.