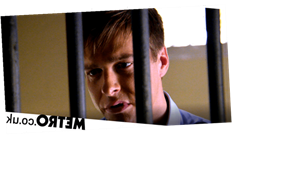 Home and Away has dropped an intriguing new trailer which explores the mystery of Witness X – the anonymous person who will come forward and drop Colby right in it over the murder of his abusive stepfather Ross.

UK viewers have watched for weeks as Colby and those who also know about the circumstances of the death have dealt with the cover-up but scenes in Australia recently saw detective Angelo finally get his wish and arrest Colby after a tip-off.

But who is helping him out?

The trailer shows an incarcerated Colby trying to find out who the mystery witness is – as they could be the key between him going down and walking free.

But as accusations fly, the suspect list grows – but it will end up in a big reveal that will have far reaching consequences for more than one Summer Bay resident.

We see Bella denying being the one to supply the witness statement against her brother but is she telling the truth?

And what about Dean? Things were rocky between the friends but would he risk incriminating himself by throwing Colby under the bus?

Willow is also another contender and seemed to show great interest when she learned that Colby was offered a deal by Angelo. Would she really be prepared to sacrifice him?

The trailer also hints that Mackenzie will soon learn the truth about how Ross died – could she respond by speaking out against Colby?