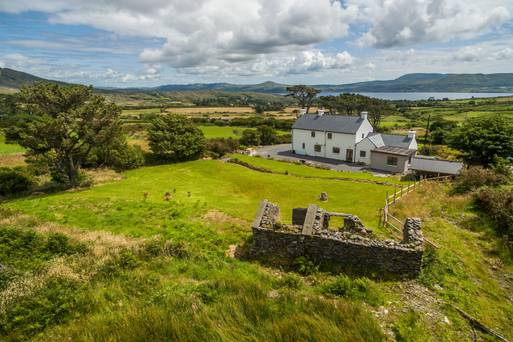 The highlight of the social calendar in Ahakista is the table quiz that takes place each year in a marquee in the car park of Arundel’s pub and restaurant over the August Bank Holiday weekend.

“There are never enough tables for all the people who want them,” says the vendor of Knockeens, a five-minute drive away. “It’s a great night and it raises thousands of euros for local charities.”

The big attraction of the table quiz is its celebrity quiz-master, Graham Norton, who famously hails from nearby Bantry and has a holiday house on the water at Ahakista – a glass-of-sauvignon-blanc’s-throw away from Arundel’s and The Tin Pub, the other popular watering hole in these parts.

The current owner of Knockeens, which lies close to Ahakista on the Sheep’s Head peninsula between Bantry Bay and Dunmanus Bay, didn’t come from the area originally, having been born in Belfast and brought up in England. But she always had a hankering to live in Cork – her father came from the county – and 20 years ago started looking for a home in the area.

“I hired a property locator,” she recalls, “and he took me around a number of different places that we had short-listed together. The house at Knockeens was the last one that we visited, and I remember falling in love with the location and the sea views, but the house was in a terrible state. We’d left my mother waiting in Clonakilty and when we went back to her I said I thought that perhaps the house was just too much for me to take on. But in spite of that I decided that I was going to buy it.”

Initially, she intended to restore the existing house, but it soon became apparent that it was not possible – it was too far gone. Instead, she drew up an outline floor-plan of the kind of home that she wanted (“full of light”) and brought it to local engineer, Declan O’Shea, in Dunmanway.

“He re-worked my ideas and improved on them and eventually, after a long battle, we got planning permission to demolish the existing house and build a modern version of it on the site. We moved the house about 10 metres to the east to improve the views and to enable me to put in a driveway that would go all the way around.”

Knockeens is essentially two houses in one, as it was designed to provide separate, but adjacent homes, for the vendor and her late mother.

The two-storey farmhouse on the eastern side of the property has underfloor heating on the ground floor, where there are a sitting room, kitchen and hall/dining area, which could be used as a library or workspace. Upstairs, there are two en-suite bedrooms, both with walk-in wardrobes, and a third room that’s currently used as craft room/study with an adjacent store-room, but could be an additional bedroom.

To the west is a single-storey self-contained apartment with a bedroom, kitchen and sitting room. The bathroom has disability access.

At the front of the house, facing south, is a large lawn that would be suitable for cultivation should new owners have a hankering for growing vegetables, while to the rear is a store and fuel shed, and an old stone hen house/agricultural outbuilding which could be suitable for conversion into additional living accommodation, AirBnB rental or an artist’s studio, subject to planning permission.

The vendor says that what she has enjoyed most about living here is the people (“we don’t live in each other’s pockets, but they are five minutes’ away if you need help”) and the tranquil quality of life, with wonderful walks, including one leading from the rear of the property via the Goats’ Path to the top of the mountain, from where there are spectacular views of Bantry Bay and Co Kerry beyond.