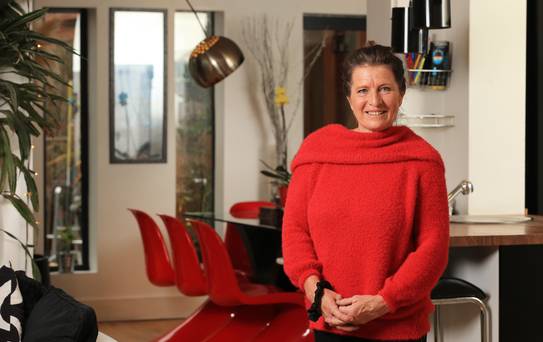 This semi-detached house in Glasnevin has a double-storey extension in the side space where many other properties on the road have a garage. But beyond that, there are precious few clues as to what awaits the prospective buyer beyond the front door.

You can get some idea of the size and layout of the original 1950s house from 99 Sycamore Road just down the road. With an asking price of €345,000, and a BER rating of F, that property has just gone sale agreed. It has three bedrooms and one bathroom and was extended at the rear to bring it up to 121 sqm.

Arya, however, stretches to a total of 209sqm and that doesn’t include the mews house to the rear. The owner has taken Arya to the max.

Anne Marie Doyle bought 114 Sycamore Road in 2004. “It was quite dilapidated but it had potential, the potential of the structure of the house and the site – I could see it was enormous.” She paid €357,000 “and I would say easily that and more went into it”. An interior architect, Anne Marie was running a busy practice called Insideout at the time, completing 12 or so domestic projects a year. She was also a single mum with four children living in a house she had designed in the Co Meath countryside.

“It was fantastic. But the problem was you were constantly behind the wheel. My work was in the city, the children’s schools were in the city. It got too much.” The answer was to buy back in the city.

Over the following five or six years, she transformed the place as her family’s needs changed. When the crash came, her own circumstances changed too as work bottomed out and she retrained by doing a law degree at nearby Dublin City University (DCU).

However, nothing put a damper on her improvements to Arya. “Every architect has a project they think they got right,” says Anne Marie. “I think I got this right because we lived in it as we did the work.”

The ground floor was hollowed out to form a spacious living room with a light-filled designer kitchen and dining area to the side. A utility room leads off the kitchen, an unusual curved guest shower and WC were carved out from the understairs area, while a playroom/office or potential guest bedroom was added off the main hall.

Upstairs, the original three-bed now houses four double bedrooms, three on the second floor with a family bathroom with free-standing bath. A roof garden catches the morning sun and is Anne Marie’s favourite place for her first coffee of the day. The top floor has been converted from attic space into a self-contained master bedroom with en suite and seating area that is fully compliant with building regulations.

As the children began to grow up and needed more independence, Anne Marie added a two-bedroom mews house to the rear of the house, which made a perfect teenage hang out. It has two bathrooms, a private terrace and a separate rear entrance as well as a potential rental income of €1,700 or €1,800 a month.

But the real showstopper at Arya is the 7.5m long outdoor swimming pool. It cost approximately €37,000 in 2007 when Anne Marie had it built, but she reckons it was worth every penny.

“The kids and the neighbours’ kids were never out of it the whole summer long,” she says.

The rear garden is landscaped to provide sunny seating areas, both sheltered and outdoors. There is a Japanese sunroom to the rear of the house for when it’s raining, patio areas for dining as well as a retractable deck over the pool that can also serve as space to lounge.

Anne Marie’s four children are all grown up now and she is on the look-out for a smaller property in the area. “The kids have flown the nest so it makes sense to downsize,” she says, “and let a family start again here”.

Arya sits towards the Finglas end of Glasnevin and is in a well-established area for families, offering a large number of local schools, including St Canice’s, Gaelscoil Ui Earcain and Beneavin De La Salle College.