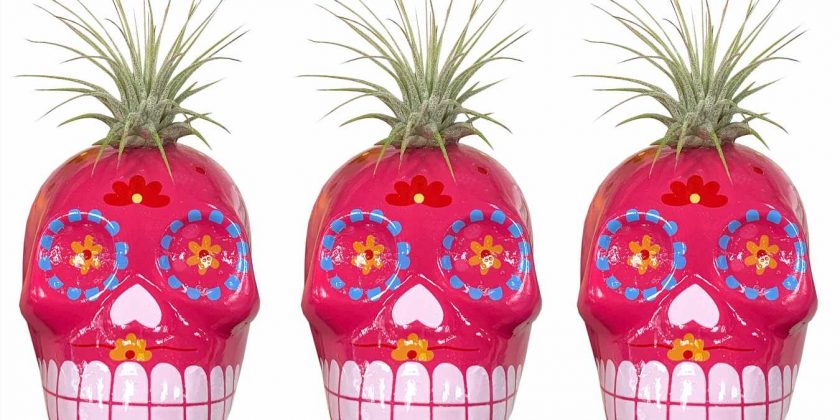 Trader Joe’s is ready for autumn — and their house plants have never been more festive.

Fresh on the heels of their yoga-inspired skeleton succulents, the grocery chain has released a new line of seasonal planters just in time for the fall holidays: succulents in colorful sugar skulls.

The recognizable symbol of the Mexican holiday of Dia de Los Muertos, or Day of the Dead — which takes place from October 31 through November 2 — sugar skulls, or calaveras, are traditionally placed on homemade alters to pay homage to those who have passed.

Trader Joe’s brightly-colored, ceramic planters are just $3.99 for the mini one, which comes with either an air plant or small succulent. For $9.99 you can purchase the larger version, which comes with a sizable succulent inside. Each is available in a variety of different colors, including red, turquoise, fuchsia, purple and black.

Scour the plant section at your local TJ’s to see if they’ve made it to your neighborhood, and be sure to scoop them up if you see them — seasonal items typically don’t restock quickly at the chain, if at all.

Día De Los Muertos is one of the world’s most misunderstood holidays. Because it’s celebrated within range of Halloween, and features an assortment of macabre imagery and costumes, some people assume it’s just “Mexican Halloween,” but it’s not meant to be spooky. Instead, it’s a sacred time to remember and celebrate loved ones who have died.

The central belief is that the spirits of the dead are allowed to rejoin the living on November 1 and 2. People decorate alters with sugar skulls and toys as gifts for children who have died, while favorite foods and favorite possessions and even alcohol are left for adults who have passed.

If you’re keen on mixing the season’s holiday decor with plant life, you might as well keep an eye out for the aforementioned yoga-inspired skeleton succulents.

This slightly spooky item is a Trader Joe’s exclusive, Kenya Friend-Daniel, a spokesperson for the chain previously told PEOPLE. The Skeleton Yogis come in two different bone-chilling poses and are made of polyresin.

Sitting atop the yogis head is a small air plant The greenery is called Tillandsia ionantha, Friend-Daniel shared, and only requires a minimal amount of care.

Similar to the sugar skulls, the yogis are surprisingly affordable, retailing for $5.99. A boo-tiful gift for the fall season!