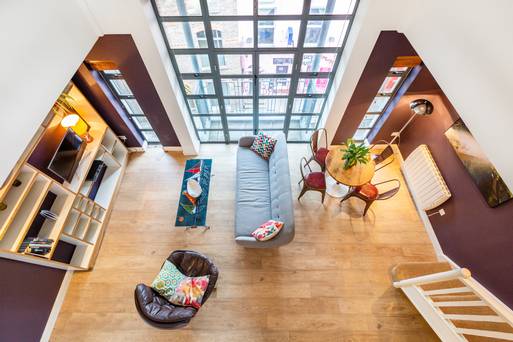 ‘It’s actually not what you’d expect at all,” says Ronan Rogerson – Drury Buildings co-founder and also the boss of one of the world’s top training schools for cocktail makers. He’s talking about his years spent living in a plush two-storey penthouse in Dublin’s all singing and dancing (and drinking) Temple Bar quarter.

“Everybody knows about the Friday and Saturday nights when the place is party central,” he says. “But for most of the rest of the week it’s completely different. As a night worker, what I remember most is getting up on a Monday and having an excellent breakfast in Cow’s Lane with plenty of fine coffee outlets to choose from, or sitting out on a balcony watching the world go by. Or the fact that if you want to go anywhere it’s just so easy.

“To a gig in Dun Laoghaire? Hop on the Dart, to the biggest shops, just a stroll away. In fact, what I always remember is the comedian Dave McSavage used to busk in the street just below the balcony early afternoons every Saturday and Sunday. I would sit there sipping coffee and loving every minute of it. It never, ever got old. Sometimes someone he accosted would try to give him a dig. It was always hilarious.

(The satirist star of The Savage Eye was famed for spontaneous comedy busking routines in the street into which he dragged unsuspecting passers-by). Rogerson has recently gutted and reworked his penthouse at The Friary in Cecilia Street, Temple Bar and has just placed it on the market seeking €495,000 through the Felicity Fox agency. “I moved to Dublin 8 and my sister took it over for a time and then I had it rented,” he says. “And I have to say, right after refurbishing it, I had to truly struggle with preventing myself from moving back in again.”

Rogerson is one of Dublin’s new breed of post-crash design-led pub hosts and is best known for Drury Buildings, a stylish upper-crust Italian Restaurant on Drury Street which also contains a go-to cocktail bar that has become a regular haunt for the city’s movers and groovers.

The project, which the long-time hospitality entrepreneur kicked off with co-owner Declan O’Regan, set out to bring a slice of the Big Apple to Dublin. The pair took a multi-storey building in very poor condition, stripped it out and then headed to New York and its architectural salvage outlets to source the fittings.

The bar counter downstairs is from an olde worlde bar in Brooklyn. The restaurant and private dining room bars old elevator doors while brass-framed windows and doors outside are from a New York house. There’s furniture from an old church and tiles have also been sourced in New York. The project has taken six years and it is still ongoing.

“We’re just getting ready to tackle the three uppermost floors now and we’re very excited about what we’ve got planned for these,” says Rogerson. “It’s a constant project. We’re constantly trying to improve the experience for our customers.”

Meantime, three years ago the entrepreneur decided to pass on his cocktail-making skills by founding the Dublin Bar Academy. Hospitality sector staff enroll to learn mixology (cocktail making) along with product knowledge, customer service and other related skills. “In the past, you either did an apprenticeship as a barman in a pub or you went to Cathal Brugha to do hotel management. There was a real need for something in between.”

The academy has proven to be a big success, having trained in more than 2,500 hosts since it opened in 2016. Trainees now come from other countries, in particular the Scandinavian nations and from France, to learn how deliver a classy cocktail.

Rogerson has by now trained in many of the movers and shakers behind some of Ireland’s most stylish bar counters. “Recently I ran into a past student who has become a brand master for Jameson. It does make me proud, I have to say.”

And those constant forays to the New York salvage outlets were also handy alongside his big project renovation skills when it came to doing up the penthouse. “As with Drury Buildings, I was hands on and did a lot of the work myself along with a good joiner. We literally stripped everything out – and I mean everything – and started again. I had a good idea from the offset about how I wanted it to be,” says Rogerson.

“There’s definitely stuff from New York; the kitchen wall tiles, for example. We put in new floors, two new bathrooms, all new appliances and we even installed a heat-exchange ventilation system.”

This technology replaces the air inside constantly and uses the heat in outgoing air to heat the incoming, which is also filtered. It therefore ensures the home has fresh and filtered air at all times whilst saving money on the heating costs. This has proven advantageous in a 700 sq ft plus home with open-plan spaces. “I actually started renting this apartment in my twenties back in 2002. It’s surprising just how many of the businesses in Temple Bar are still here today,” says Rogerson.

Having rented here for five years and enjoying the location immensely, Rogerson decided to step up and buy it outright from the owner in 2007. The block itself was built in 1996, just as the Temple Bar project – and the last property boom – was getting off the ground and it contains more spacious units than some later constructions. Built in a warehouse style, it captured the spirit of then-plans for a then run-down enclave which was beforehand destined to have been demolished to make way for a giant city bus depot.

The big feature is the open-plan living, dining and kitchen space, which features a loft-style floor-to-ceiling window looking down into the lively street below.

On one side the apartment looks into Fownes Street, one of Dublin’s oldest and home to Temple Bar’s longest-running retailer, the Flip vintage clothing store.

On the other side, it looks into Cecilia Street and the old Dublin Medical School building. It has a private street-facing balcony on one side and a shared roof garden (with two other apartments) on the other.

No2 is laid out over the second and top floors and has its own entrance. Enter via a long hallway leading to the living/dining room with double-height ceiling and double doors to the Fownes Street-facing balcony. With deep blue units and a polished timber top, the kitchen is tucked off the main living area.

Off the hallway is double bedroom one and the main bathroom has a walk-in shower. A staircase leads to the second bedroom and from here access to the west-facing roof terrace via sliding patio doors. A fully-tiled ensuite completes the accommodation – in all a heady cocktail for those who have designs on occupying a top spot at the ‘Bar.