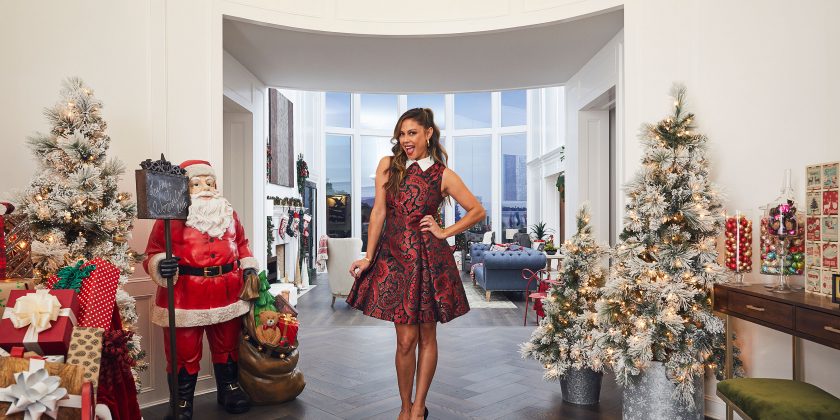 The lure of a well-stocked HomeGoods is a force no decorating fiend can resist — including celebrities.

The popular décor destination, known for its huge selection of affordable (and occasionally offbeat) finds, is a favorite resource of any budget decorator. But the discount store, whose parent company TJX Cos. recently launched a new chain of stores in the U.S., has also garnered a list of celebrity fans who, like us, will never pass up the chance to spend an afternoon filling their carts with candles, coasters and “Champagne” signs.

RELATED: HomeGoods Is Launching a New Chain of Stores: Here’s Everything We Know So Far

The Top Chef Jr. host transformed her and husband Nick Lachey‘s L.A. home into a winter wonderland primed for holiday entertaining, finding room for everything from a life-size sleigh full of presents to a hot cocoa station. With help from HomeGoods, the former TRL host created a holiday style she describes as “kind of a modern cabin feel,” thanks to pops of buffalo plaid (her new obsession) and larger-than-life decorative items like Nutcrackers.

The rising country star loaded up on “Bohemian Western” pieces from the home store while redecorating the music room in her eclectic Nashville home. Choosing bright pieces like a furry piano bench, a bright blue swivel chair and shadow boxes to hang her favorite Dolly Parton records, the “Queens Don’t” singer transformed her space into a true creative oasis.

The Real Housewives of Beverly Hills star stocked up on dorm decor for her daughter Sophia Umansky’s new college digs. The mom-daughter duo left the L.A. store with bags full of colorful hangers, bedding and desk supplies after a successful shopping day. Sophia graduated high school in May and visited a college in Washington, D.C. in April, when her dad, Mauricio, told Bravo she hadn’t yet decided where she was going.

The Real Housewives of New York star took over the store’s Instagram Story to document her pre-holiday party shopping spree. From the looks of it, her guests can expect some very festive cocktails mixed in a gold shaker, the furriest faux throw and one enormous chocolate Santa.

Camp and husband Skylar Astin, who starred together in Pitch Perfect, found more home goodies than could fit in a single cart-load on a recent visit. “Sometimes you just gotta hit those Labor Day sales @homegoods with ur hubby,” she captioned an Instagram of the pair having a star turn on the store’s security camera.

The Hills vet is captured here with the true mark of a successful HomeGoods run: a bag full of goodies and a proud expression signaling a decorating job well done.

The Younger actress is all about her HomeGoods finds. She joined forces with the store and designer-artist Mike Harrison to put together a pretty pink palette in her New York City apartment that captured her colorful spirit. The Broadway star is such a fan that she also decked out her dressing room with HomeGoods finds too.

The young couple, who met while competing on So You Think You Can Dance, teamed up with designer Amy Lipnis to outfit their home with affordable pieces that works hard and play harder. “Something that’s so up our alley is the games we have from HomeGoods,” Boss told PEOPLE in February. “We are a gaming family. We don’t have them hidden away in a box somewhere, they actually add to the décor, which is really cool.”

Tamar Braxton’s HomeGoods hunt led her to find the centerpiece of her home bar: a champagne sign she found for $99. “It was just the icing on the cake,” the reality star told PEOPLE last year.

Caught in the act: Melissa McCarthy was photographed wheeling out two carts-worth of goodies, a feat that required getting a little help from an employee.

An animal statue is what spoke to Lance Bass and husband Michael Turchin when they made a stop at their local store. “When we went to Africa we went on a safari,” Bass says. “We were introduced to this animal, the Impala, which I had never heard of. The day we got back from Africa we went into HomeGoods and saw this staring at us and we were like ‘We have to get this guy.’”

The former Real Housewives of New York star attended the opening of a HomeGoods in Manhattan. Alex McCord and Simon Van Kempen, also formerly of RHONY, and designer Nate Berkus were on site for the festivities as well.

13. The Characters of Big Little Lies

HomeGoods even makes appearances on the small screen. Reese Witherspoon’s beach house on the HBO series Big Little Lies sports plenty of the store’s beach-inspired décor. “I go in with two of my buyers and everyone gets a cart and we start a wagon train,” set decorator Amy Wells tells PEOPLE of her shopping process at the store. “We go through, fill a cart, line up at the cashier, the cashier looks at us like, ‘Oh my god, what are you guys doing?’ and then we go for another round.”

Other celebs who have reportedly been spotted indulging in a little retail therapy at the store include Justin Theroux, Miley Cyrus and Liam Hemsworth, Real Housewives of Beverly Hills’ Lisa Vanderpump, E! News‘ Jason Kennedy, Amber Rose and Ali Larter.