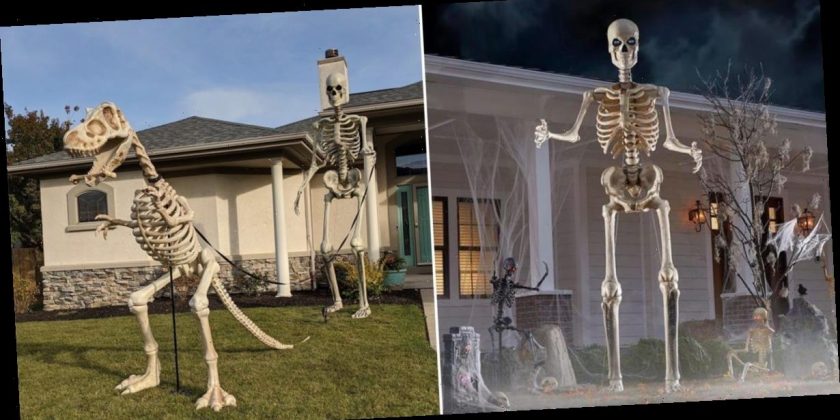 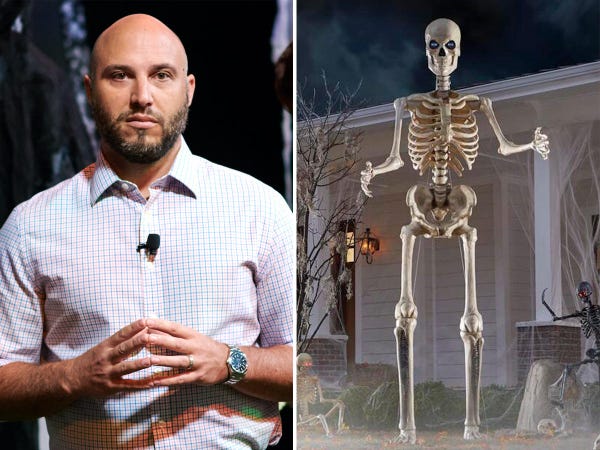 The skeleton is 12 feet tall, it features LED "LifeEyes" that watch trick-or-treaters and passersby, and the internet can't get enough of it. Tweets, memes, and even satirical articles came pouring in about the skeleton when it hit shelves, and it's been sold out in Home Depot stores for weeks.

Search for the giant skeleton peaked at the end of September and beginning of October, according to Google Trends, but people are still posting about it daily.

The skeleton first got attention for its absurd height.

But the $300 price tag also made people's heads turn, and the spooky monolith served as a welcome relief from the hardship of 2020.

Lance Allen, the mastermind behind the skeleton and merchant for decorative holiday at The Home Depot, told Insider he didn't anticipate the massive decoration to be greeted with as much fanfare as it was.

"I've been involved in the development of some great items over my career," Allen told Insider. "This was the one that I was most excited to see launch, and definitely the hardest to keep confidential."

Allen and his team visit trade shows and haunted houses throughout the year to keep up with decor trends and find inspiration.

Allen said they saw "commercial, partial skeletons" at the shows and houses, which sparked the idea for the final design of the giant skeleton.

"We wanted to leverage that look and feel in something we could bring to a retail setting," Allen said.

The design process for Home Depot's seasonal items typically takes 12 to 18 months, so the skeleton had been in the works for a long time before customers were finally able to get their hands on it.

Although the skeleton ended up being a big hit with customers, it's possible people might have chosen not to get the skeleton because of its size, as it may not have fit in their yards or homes.

But the 12-foot skeleton was designed with avid Halloween lovers in mind, so Allen and his team weren't concerned about the size being a turn-off for shoppers.

"The 12-foot skeleton was for the Halloween enthusiasts who aren't afraid to go the extra mile for the best of the best decor," Allen said.

"We really haven't seen our customers say our items have ever gotten too big," he added. "They always find a way to display them. The only issue they may run into is how to get them home."

Plus, there are a number of other large decor items available for purchase at Home Depot that were also popular this year, from a 10-foot inflatable Oogie Boogie to a 10-foot pirate ship. It seems that with Halloween displays, bigger is definitely better.

Allen said the team wasn't anticipating the skeleton to get as much attention as it did, despite their confidence in the design. The massive sales were just a happy surprise.

It became clear the skeleton would become a Halloween favorite back in August when photos of it first hit the internet, as Allen told Esquire. It started selling out all over the country soon after, and the meme treatment followed.

"We are so happy to have provided a product to the market that brought so much joy," Allen told Insider.

A quick search of "giant skeleton" on any social-media platform will bring up dozens of photos of Allen's creation displayed in yards, on roofs, and even inside people's homes.

People have fawned over the skeleton, and some have even upped the ante with their seasonal decor because of it.

"When I saw it at Home Depot, at first I thought it was too ridiculous," Anthony Capobianco, who is the proud owner of a giant skeleton, told Insider. "But then I decided I needed that level of ridiculous in my life."

Capobianco made a six-hour round-trip car ride to bring home a skeleton for himself, calling Home Depot and buying it over the phone so he wouldn't miss out on his chance.

He also spent an additional $675 on buying and shipping a T-rex skeleton for his yard so his human skeleton could have a pet.

Capobianco told Insider he plans on buying another giant skeleton the day after Halloween so he can have two for next year. They're going on sale for just $75 after Halloween, so it's an ideal time for Capobianco and others who have caught the skeleton bug to invest.

Capobianco plans to alter the skeletons so they can move and talk to each other, allowing him to take his 2021 display to another level.

He also told Insider he already invested in a few large, pre-lit deer for his yard from Home Depot for Christmas — just in case there's another display shortage come December.

Allen, on the other hand, is already thinking about Halloween 2021. "This year will be a tough act to follow, but we are 1000% up for the challenge," he said.