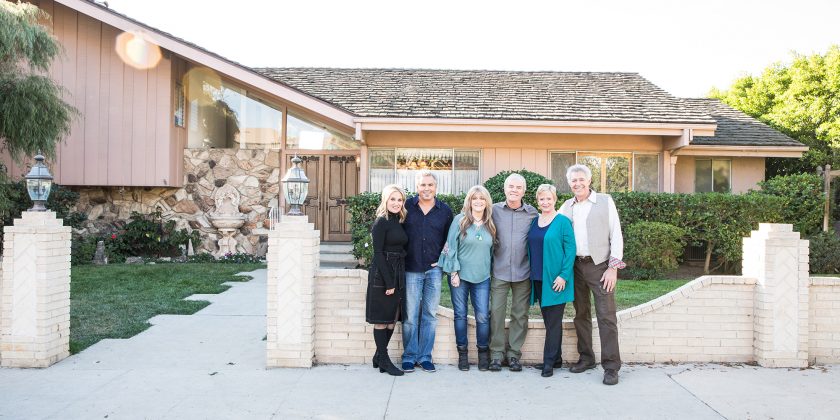 The Brady Bunch kids have reunited!

On the new series, which will debut in 2019 and feature special celebrity guests, the famous house that served as the facade of the Brady family home on the beloved sitcom from 1969 to 1974 will be restored inside and out in full 1970s style.

“What’s so exciting about this project is that we are creating one of the most iconic homes from many of our viewers’ childhoods,” Loren Ruch, senior vice president, HGTV programming and partnerships, said in a statement. “It will be the first time in history that the house from all of our memories will be created in a real brick and mortar location. It is certain to be a trip down memory lane.”

HGTV purchased the home for $3.5 million in August, outbidding many who were eyeing the property, including a “heartbroken” Lance Bass. Had Bass had the winning bid, he has said, he would have renovated the inside to match the set.

“I’m a huge Brady fan, so I wanted to turn the house into what we all knew from the television show because all they did was use it for exterior,” he said while attending the iHeartRadio festival in Las Vegas. “The inside looks nothing like it, so I was gonna add a lot of square footage, add a second floor and try to turn it into that iconic set.”

Although Bass was absent from Thursday’s festivities, he has plans to help produce HGTV’s new show.

WATCH THIS: ‘The Brady Bunch’ House up For Sale After Nearly 50 Years

“There’s a lot of things that have to be done before we can start remodeling it, so it’s going to take a year or two,” he told PEOPLE in September.

“The fans came to my rescue. They saw how hosed I got,” he added, referencing his failed real estate deal. “They forced HGTV’s hand to get me involved.”

When the home first hit the market, rumors swirled that developers were planning to swoop in and tear down the home.

Even Maureen McCormick said she considered purchasing the home, until she heard that developers were eyeing it.

“When the whole thing happened, I have to say that I really thought, ‘Gee, I would like to buy that house,’ McCormick told PEOPLE on the red carpet at the Carousel of Hope Ball in Los Angeles. “I just kind of figured once I heard all the craziness, I thought, man, I can’t even compete with the onslaught of people that I thought would be coming for it.”

RELATED: 11 Famous Houses From Movies and TV Shows You Can Actually Own

When she found out HGTV had placed the winning bid, she says, even though she was “bummed” for Bass and the other prospective buyers, she admitted that she would be “intrigued” to see what HGTV would do.

“If anyone’s gonna redo that house, who could be more perfect than HGTV?” she told PEOPLE in September. “I’m a big fan of their network. I’m sure that they will do a great job.”

A Very Brady Renovation will premiere on HGTV in 2019.