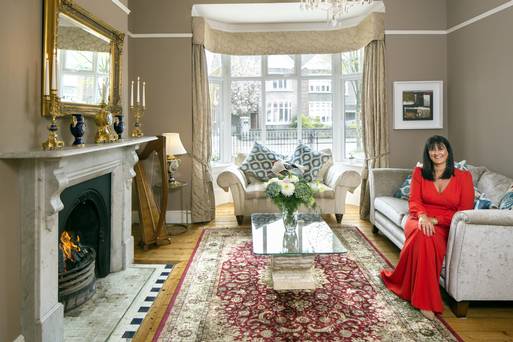 When Rhoda McDonagh spotted a 19th-Century redbrick for sale in a leafy residential neighbourhood in Dublin 4, she felt as if she was drawn by an invisible force to view the house.

At the time, Rhoda was a carefree career woman, as was her sister Sinead, with whom she was planning to buy a house, and this was not the kind of house either originally had in mind. Yet Rhoda was adamant she could not resist its pull. Rhoda now feels as if it was fate; it’s turned out that the house – which the two went on to buy – is perfect for her family, her lifestyle and the company she went on to set up.

Rhoda is owner of Designer Room, a business whereby she hires out stunning designer dresses for special occasions. The dresses are designed by the fashion world’s top creators, including Stella McCartney and Victoria Beckham. Rhoda has a spacious studio, full of light and height, where the dresses can be tried.

Rhoda, a bubbly brunette with a wonderful Clare accent, is the first to admit that her only credentials for setting up such a business are a year in her twenties spent working in a boutique in the States, and her addiction to shopping. Her previous career was in the hospitality sector and banking. Originally from Cratloe, near Shannon, where her family has an engineering business which employs 150, and where her father also trains horses, Rhoda decided after school that she wanted to travel. She felt the best way to do so would be to go into hotel management, so she applied to go to the college in Shannon.

However after a summer working in a hotel in Bunratty making beds, Rhoda asked herself if she really wanted to go back to studying for four years. “School and me were never really good together,” she volunteers. The answer she gave herself was no. “Instead I asked for experience in reception,” she says, “which I got, and then the reservations office. From there, I decided to take off for New York for a year.”

Rhoda worked in a boutique in the Hamptons and rented a large house and, displaying her entrepreneurial streak for the first time, she let out the other rooms to holidaymakers. After a year, she returned to Ireland, this time settling in Killarney, where she worked again in hotel reception and reservations. “After eight years there, I got itchy feet again, and I took off to Australia for a year,” she says. “I went with a guy and we split up when we came back, so I didn’t have any interest in going back to Kerry. My sister Sinead was in Dublin so I moved to Dublin.”

Rhoda was lucky in that she immediately got a great job in the AIB, working on the business team. “It was 2001, the euro was just coming into Ireland, and they thought with my hotel background, I could organise events for the business sector. They were doing roadshows on how the euro would affect businesses,” she says, adding that shortly after, a sponsorship role within the bank, working on GAA and rugby sponsorship, came up and she got it.

It was a fabulous job and Rhoda loved it. Then, after about eight years there – “my life seems to go in eight-year cycles,” Rhoda says with a laugh – she decided to take a career break and headed to Africa to volunteer.

“It was 2009, the banking crisis had happened, budgets had stopped, I was single, 34, I suppose I was going through a midlife crisis and I thought, ‘What am I going to do?'”. For some reason, the idea of working for a charity appealed and she went to Kenya with African Impact. “I worked in an orphanage for six months. That put a whole new emphasis on life and appreciation and children. I was the last one to be saving the world. I would be the first to go into Brown Thomas to buy something expensive, but maybe Africa was something I had to do,” she laughs.

After Kenya, she went to Zanzibar and taught in a business-tourism school and also a kindergarten. “I was there for five months,” says Rhoda. “That was where I met the father of my two children, who was working in a bar there. We, the volunteers, used to socialise in that particular bar, and between the sun and the sand and the sea and no shoes, a romance blossomed.”

“I thought I fell pregnant, but it turned out I wasn’t,” she recalls. “However, something in me said, ‘I want to be pregnant.’ So I went for it, even though I come from a traditional Irish family, and expecting that I’d not be spoken to when I’d come back to Ireland.”

Rhoda came home when she was three months’ pregnant. It was quite a shock to the family, but she realised it didn’t matter what anyone thought. “All I knew was that I was carrying a child and it would be fine. Having said that, I didn’t know what the future of my partner and I was going to be,” Rhoda says, adding that her family were fabulous and embraced first her daughter and later her son.

Her beautiful Juliet was born in November 2010. Her partner came to Ireland for three months and then returned home. Rhoda went back to Zanzibar when Juliet was six months old to see her partner’s family. To her delight, she became pregnant again, and her son Samuel was born in 2012. Her partner wanted the family to stay in Zanzibar, but she felt Ireland would be a better place to bring up the children, so she and her partner, who managed to get a working visa, returned to live in Ireland. He stayed three years but it didn’t work out.

“It was a complete culture clash,” says Rhoda. “He was the lion, I was supposed to be the lioness. He wouldn’t be used to women going out on their own and socialising, which I had to do for work. My life experience was that my father and mother were a team, they had each other’s back. I wanted to show my kids that a relationship should be team work and, to be honest, it just wasn’t happening. We split up at the end of 2015.” The following year, the situation hit Rhoda like a ton of bricks. “I went into a dark place, and having the pressure of being the sole provider for the two kids, I just crashed. My sister Sinead McDonagh, with whom I used to share the house, is a Feng Shui master and she was great. She is the most special person,” Rhoda explains. “I also went to lots of counselling. One of the best things I got from it all was when the counsellor told me to write down everything I truly love in life – anything, my kids, a walk in the park, buying clothes – on a sheet of paper. She said that when you live with that list, you’ll realise what you want.”

And it worked. “I loved my job but I wanted to do something different, that would enable me to spend more time with the kids and earn a living. Something triggered in my brain, the clothes element, and I remembered one time when I was going to a wedding and I was looking to hire a Victoria Beckham dress and couldn’t find anywhere where I could do that. I thought maybe I could buy the dresses and hire them out. I started to research that whole field”.

The result is Designer Room – she has over 300 top-quality dresses available for hire – and it’s all done through her website. Oportunities to view the dresses are by appointment only, which means she can work around the kids’ timetables. She has added a new dimension recently, whereby a person who has lovely occasion-wear but rarely gets the opportunity to wear it, can hire it out through the Designer Room while still owning it, and they get a percentage of the charge for themselves.

One of the nicest aspects of Rhoda’s business is that it’s all done in her home and she has a wonderful studio – comprising the dress-display area and fitting rooms – which is the former master bedroom of her lovely house in Dublin 4.

It’s the house she bought with her sister back in 2003, and it was just after their beloved mother, who got cancer, had died.

“My mother was amazing, and before Mum died, she said she wanted myself and Sinead to have a home in Dublin, as we both worked in Dublin. Two of my brothers are in the family business and the third has a pub in Moscow. She really wanted us [daughters] to have something.”

“She died in March, 2003, the third of the third, 2003,” Rhoda goes on to explain. “Even though I never knew this road, six months after she died we came down here and saw the ‘For Sale’ sign. There was an open viewing and the door was open and for some reason, I said to my sister, ‘Stop the car, let’s go in.’ She said, ‘Come on, it’s out of our league.’

I said, ‘This is it,’ and the minute I walked in that front door, whatever sense I got, I just knew this house was going to be mine. I got a beautiful presence from this home. I know people might think I’m away with the fairies, but I think it was my mother sending it to us.”

Everything about the house which had once, briefly, been lived in by the Easter Rising patriot Padraig Pearse – possibly another presence – was perfect. It had been renovated by a builder and his interior-designer wife and all the sisters had to do was move their furniture in.

Rhoda bought Sinead out shortly after, but they are still the best of friends. Over the years, Rhoda changed the colour schemes and insulated the house – “my eldest brother gave me that as a present” – but little else had to be done.

She also discovered that it has a fantastic basement, ideal for storage. And given Rhoda’s new business, there’s every possibility that the basement was one of the reasons her mother picked the house. If there’s one thing Rhoda and her flourishing business need, it’s lots of storage.