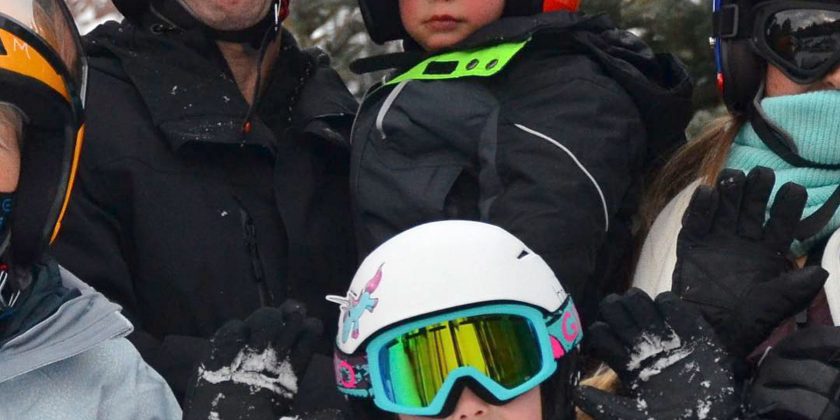 Tarek El Moussa jetted off to Colorado to hit the slopes with his and ex Christina’s kids, a few days after her surprise wedding to Ant Anstead.

The Flip or Flop star, 37, previously told PEOPLE he would be spending Christmas with his children: daughter Taylor, 8, and son Brayden, 3.

“I have my babies Christmas day and we are all so excited,” Tarek said. “I have a good-sized family so we all get together, and to keep the fun going, the day after Christmas I’m taking my family skiing in Vail, Colorado.”

They left for their family vacation on Dec. 26, four days after Christina’s secret wedding to the Wheelers and Dealers host at their shared home in Newport Beach, Calif.

RELATED: How Christina El Moussa and Ant Anstead ‘Saved Each Other’ After Their Respective Divorces

The nuptials didn’t seem to put a damper any of Tarek’s family fun, as he took to Instagram to share photos from the getaway, which included a father-son bonding moment while snowboarding.

“Just another day for Bray “Killin the game,” El Moussa writes. “Seriously though how cute is this!??….who else loves skiing/boarding with their kids!? It’s my first time with him!”

While bundled up in ski gear, Tarek and his extended family also posed for silly snapshots on the slopes as he and Taylor both stuck out their tongues.

“Tay said to make a funny face so….” he writes. “She is seriously my twin!!! It’s funny how we made the exact same funny face.”

WATCH THIS: Christina El Moussa on ‘Starting Over From Scratch’ After Divorce: ’This Year is A Rebuild’

But his kids weren’t the only ones who joined in on the vacation, as Tarek rang in the new year in Vail alongside his mom and sister.

“No I don’t have a sparkly gold toof!!!” he writes, referring to the way his smile appears to twinkle in the photo. “Had a great time with my mom and sis last night! Who rememberes [sic] these two from the show. Love you girls.”

Tarek, who lives in Costa Mesa, Calif, wasn’t a fan of the frigid Colorado temperatures.

“It’s freezing like zero degrees!” he writes underneath a photo of himself and Taylor posing in front of a Christmas tree. “I guess a lot of folks are used to the cold lol.”

Earlier in December, Tarek told PEOPLE that he was committed to enjoying his first holiday season as a single dad since his and Christina’s split and a few tumultuous years. The pair publicly separated in December 2016, and finalized their divorce in January 2018. They’ve been amicably jointly raising the kids and continue to film Flip or Flop together.

“It was super exciting decorating this year because it’s a fresh start in our new home as a family since the divorce,” Tarek said.

“You can’t truly enjoy the holidays unless you live in it,” he continued. “No matter how stressed or busy you are, at the end of the day, coming home to my family surrounded by cozy holiday décor gets me right back in the holiday spirit.”

On Dec. 22, Christina, 35, married Anstead, 39, during a ceremony in their front yard with 70 of their closest friends and family.

“It was just perfect for us,” El Moussa told PEOPLE of the celebration in December. “Everything we wanted.”

The couple—who began dating in October 2017—shared their vows as their children stood nearby. (Anstead has daughter Amelie, 15, and son Archie, 12, from a previous marriage.)

“We wanted to make it about the kids,” Anstead told PEOPLE. “It’s the six of us. We’re a blended family so it was really important for them to be a part of it.”