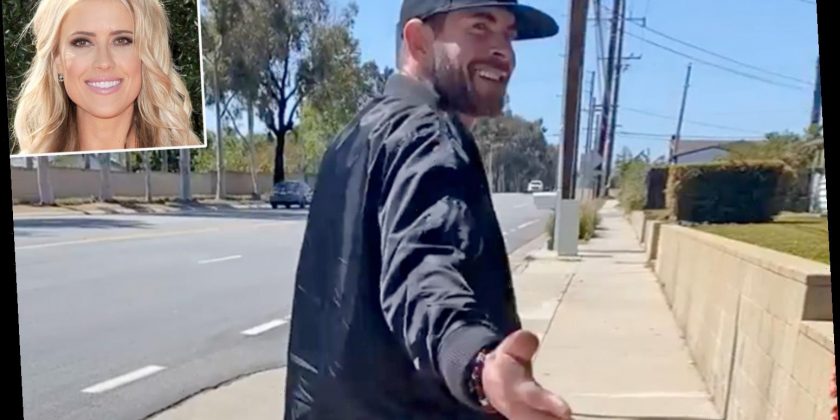 The former couple — who share son Brayden James, 5, and daughter Taylor Reese, 10 — traded off witty repartees in an Instagram Story video on Friday as Haack teased her ex-husband for his outfit choice and joked that he looked like Vanilla Ice.

In the clip, El Moussa is seen wearing a flat billed cap, bomber jacket, dark pants and black sneakers while taking a stroll on a sidewalk.

"Do you know who you look like? Ice Ice Baby," Haack says off-camera, referring to Vanilla Ice's hit single.

"I look like the best you ever had," El Moussa quips in response, prompting a laugh from the Christina on the Coast star.

Haack also called El Moussa the "new vanilla ice" in the caption of the post, which he then shared on his own Instagram Stories. RELATED: Tarek El Moussa Jokes 'I'm Not Your Man Anymore' When Christina Anstead Bosses Him Around

The pair split publicly in December 2016 after seven years of marriage and finalized their divorce in January 2018.

El Moussa got engaged to Selling Sunset star Heather Rae Young, 33, in July after one year of dating, and they are currently designing their dream home in Newport Beach, California, and planning a wedding.

Haack, meanwhile, shocked fans in mid-September when she announced her split from her second husband, TV presenter Ant Anstead, whom she married in December 2018. The couple share 14-month-old son Hudson London. RELATED: Christina Anstead & Tarek El Moussa Joke About Past Relationship: 'You Were Married to That Man?'

Despite separating more than four years ago, El Moussa and Haack remain friendly and have continued to host Flip or Flop together — even documenting some of their wisecracks to each other on the HGTV home renovation series.

On an episode of the show last year, Haack poked fun of El Moussa's fashion sense when he wore a parka with a faux-fur hood to flip a house in North Tustin, California.

"What are you wearing? Are you going snowboarding after this?" she quipped, to which El Moussa responded, "Why are you always making fun of my clothing?"

"I went to Paris, and it was cold and I wanted to look fancy," he later explained in an on-camera interview, before joking: "She's just hating on me because she's dressed like a 9-year-old boy and I look like I'm in GQ magazine."

In April, Haack opened up to PEOPLE about co-parenting with El Moussa, saying that they are a "united front."

"Tarek and I split four years ago. That's a long time. When there are tough times like these, all of a sudden we're totally a unified front and talk and email multiple times a day," she said, noting that their focus will always be: "'What's best for the kids?' "

"It's good we're on the same page — otherwise it would be a mess!" she added.