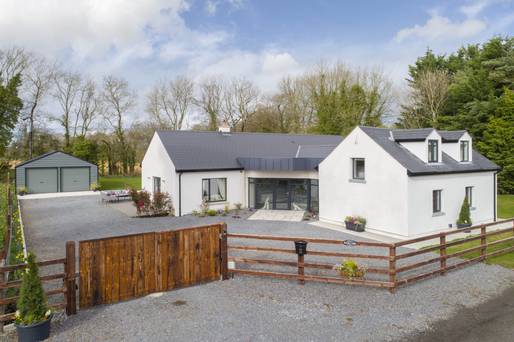 It might not look it today, but Brooke Lodge at Clongiffen, Co Meath, is said to have been built as a Parnellite cottage, or Land League cottage – one of the houses thrown up during the Land Wars for families who’d been evicted.

To describe it as having been transformed from its humble origins would be something of an understatement.

There have been successive planning applications on the site down through the years, and the most recent one, in 2015, has provided for the chic and comfortable 2,088 sq ft property that stands there today.

You now enter the house at the side, through a set of angled glazed doors that throw light into a porcelain-tiled entrance hall within. There are two bedrooms to the right here, one of which has French doors to the garden and stairs to a mezzanine level where you might sit and read a book in peace.

The third and fourth bedrooms are down a corridor, including the main bedroom which has an en suite shower and two walk-in wardrobes, no less. There are French doors from here as well to the eastern part of the garden, for morning sun.

The reception rooms then – of which there are two – are to the left of the entrance hall.

The living room is dual-aspect and has a vaulted ceiling and French doors to a patio facing south and west. Against the internal wall is a double-sided wood-burning stove.

Its other side faces into the adjacent kitchen, where there’s a centre island and integrated appliances.

Off the kitchen there’s both a walk-in larder and a utility room.

The grounds amount to half an acre with electric gates and a double garage.

Enfield and the M4 are six kilometres away.