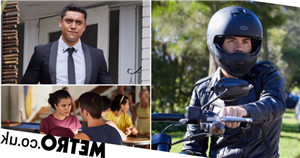 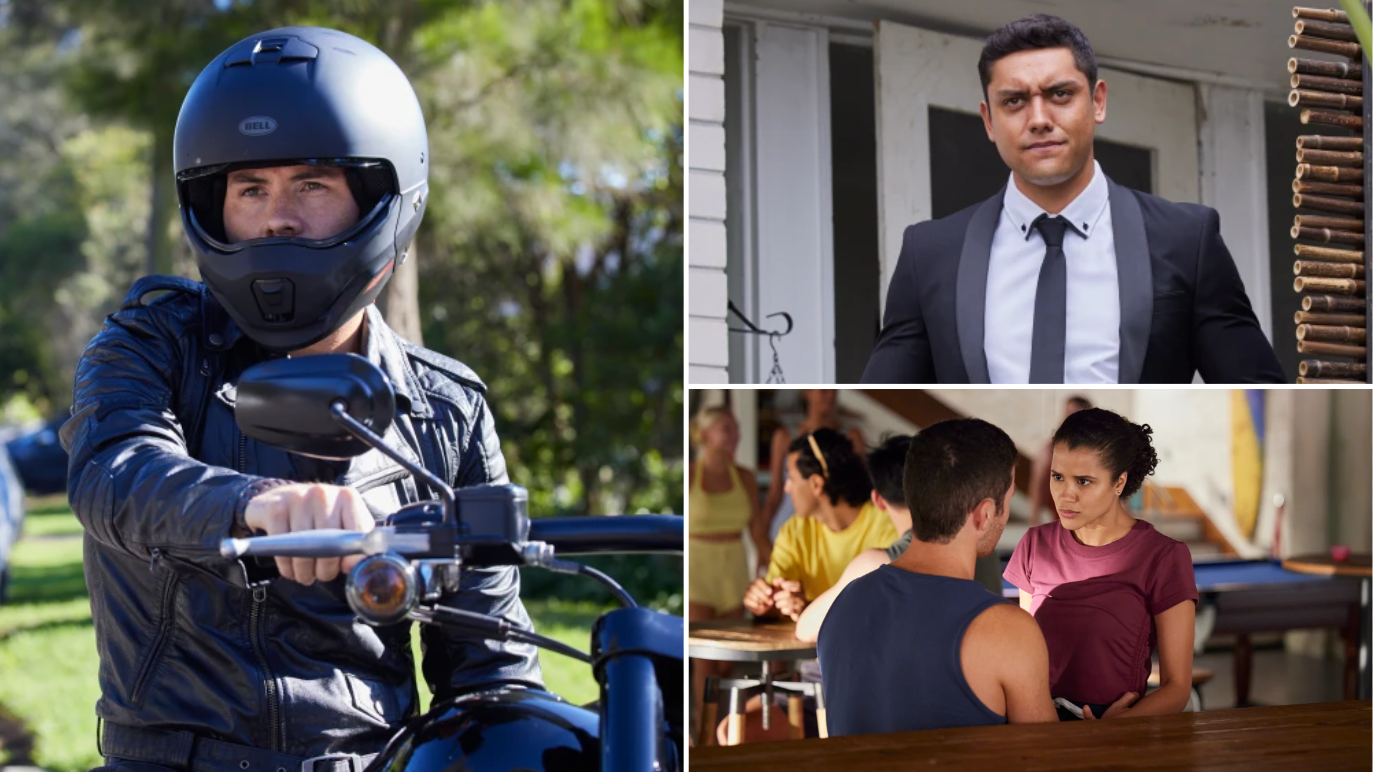 This week on Home and Away, Lyrik’s struggles come to the surface as Felicity (Jacqui Purvis) offers them a gig in Salt and Bob (Rob Mallet) immediately dismisses the idea, saying it’s beneath them. As the band feuds, Felicity begins freaking out about the upcoming live music event, wondering if she’s bitten off more than she can chew by purchasing half of Salt.

Meanwhile, Tex (Lucas Lineham) has been keeping up a convincing appearance as the good-natured handyman who has won his way to Rose’s (Kirsty Marillier) heart, but suspicion rises this week when he takes off from the gym with a photograph of Mia (Anna Samson) and Ari (Rob Kipa-Williams). Plus, as Chloe (Sam Barrett) prepares for an evening shift at home, a sinister figure watches her from a distance on a motorbike…

Here’s what’s coming up for the week beginning Monday August 15.

As the new co-owner of Salt, Felicity has come up with her first event idea – band night. To her dismay, Mackenzie laughs off the idea and says their customer base is classier than that. However, Felicity is persistent – they aren’t making enough money and they need to expand their appeal. Mackenzie agrees to a one-night trial, and Felicity’s excitement proves infectious. Mack starts plastering promotional posters all over the Bay, while Felicity heads home to give the band the good news. Everyone is excited – except Bob, who says it’s beneath them to help out a mate by doing a charity gig in a small coastal town. Kirby says there are more people in the band besides him, but Bob is clear – they won’t be performing…

Will Felicity crumble under the pressure as Salt’s big relaunch looms?

After some skilled negotiations from Kirby, Lyrik votes on whether to perform at the gig that night, and it’s three to one against Bob. The singer is furious, saying they will have to perform without him. Felicity learns of the latest shaky update as she watches the lighting getting set up in Salt and begins to freak out. There’s so much that could go wrong – the entire band could bail, maybe nobody shows up and they’re in even more debt for the expensive lighting…Tane is reassuring – if she could handle the poker nights, she can manage a legal band night. But Felicity isn’t so sure…

Despite Felicity’s concerns, band night is off to a flying start, with Lyrik proving to be popular with the crowd of people who have showed up for the event. Ziggy and Dean have shown up to support Mackenzie, and although Dean is happier to stand at the sidelines with a pint of beer, Ziggy is dressed up to the nines and ready to tear up the dance floor. As she does so, she catches the eye of guitarist Remi, who jumps down from the stage to perform a guitar solo for her. Dean quickly becomes jealous – who does this guy think he is? During a break, Remi is at the bar ordering a drink when Dean approaches him. He’s got a few things to say…

Felicity is shocked to discover Eden and Cash’s secret history

Felicity is beginning to feel more confident about band night as the evening progresses, but her initial excitement at seeing Cash show up to support her turns to confusion as her brother sees it’s Lyrik on stage and quickly becomes flustered. He tries to make a quick escape, but Eden has already spotted him. She excitedly launches herself off the stage towards him, forcing him to catch her in his arms as the crowd looks on, cheering. Felicity is initially smiling along with everyone else until she notices Cash looks like a deer caught in headlights. Eden is confused as to why Cash isn’t as keen on her anymore, and Tane questions whether the pair had a romantic history. Felicity brushes his suggestion off, but when she questions Eden later that night the musician confesses that she slept with Cash years ago. Felicity is furious – why is she only just discovering the pair had a past?

Tex has returned from the Bay with Rose after their first romantic getaway, and the pair are more loved up than before. Xander is concerned about their rapidly escalating connection, but decides to stick to his word and stay out of his sister’s business. Meanwhile, Tane has begun frequenting the gym in the evenings for his training sessions, but one night when he finds himself alone he takes the opportunity to snoop around the office. He zeroes in on a photo of Ari and Mia on the front desk from when they bought the gym, and he pockets it before taking off. Why is Tex interested in the Paratas and why does he need to steal a framed photograph?

Cash and Tex get into a brawl as horrified Felicity and Rose look on?

Eden realises she needs to clear the air with Cash, so the morning after the gig the pair meet and decide to start fresh. However, Felicity is shocked when she sees them embracing from a distance and comes to the wrong conclusions. She confronts her brother and Cash defensively says they’re just friends now. Felicity warns him to be careful, and Irene overhears. She recommends Cash tells Jasmine and Eden about each other to avoid accusations of secrecy. Then Rose overhears as she’s walking past with Tex and makes a comment which only gets Cash even more frustrated. He flies into a rage and Tex intervenes, which doesn’t go down well. As Felicity and Rose look on in horror, are the two men about to brawl in public?

A sinister figure watches Chloe from the distance on a motorbike

Chloe is at home preparing for the evening shift when we see a sinister leather-clad figure watching her from a distance on a motorbike. She doesn’t notice the figure and goes to work, where Tex goes in to begin his evening training session. All is calm until Chloe realises the photo of Ari and Mia is missing. She begins frantically looking for it, and Tex casually asks if she needs any help. Chloe mentions the photo, and says it’s of her mum and step-dad. Tex has now picked up more information about the Parata family – Chloe is Ari’s step-daughter. What will he do with this information, and how is it connected to the sinister figure?

Naomi kisses Nikau before running away in humiliation

Nikau prepares for the awards ceremony, and Naomi shows up in her evening dress. Nikau awkwardly says she looks great as she straightens his tie. However, when John shows up to drive them all there, Nikau becomes overwhelmed and decides he can’t do it. He hides in the house and tells John to accept the reward on his behalf. In the morning, Alf approaches Nikau on the beach to give him a piece of his mind – he let the Club down, and he let himself down, last night. Nikau is ashamed and Naomi approaches him – she saw the showdown. She does her best to comfort him, outlining all the reasons he’s amazing, then impulsively kisses him. Nikau is stunned, and Naomi runs away, humiliated…