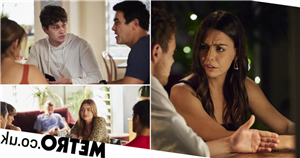 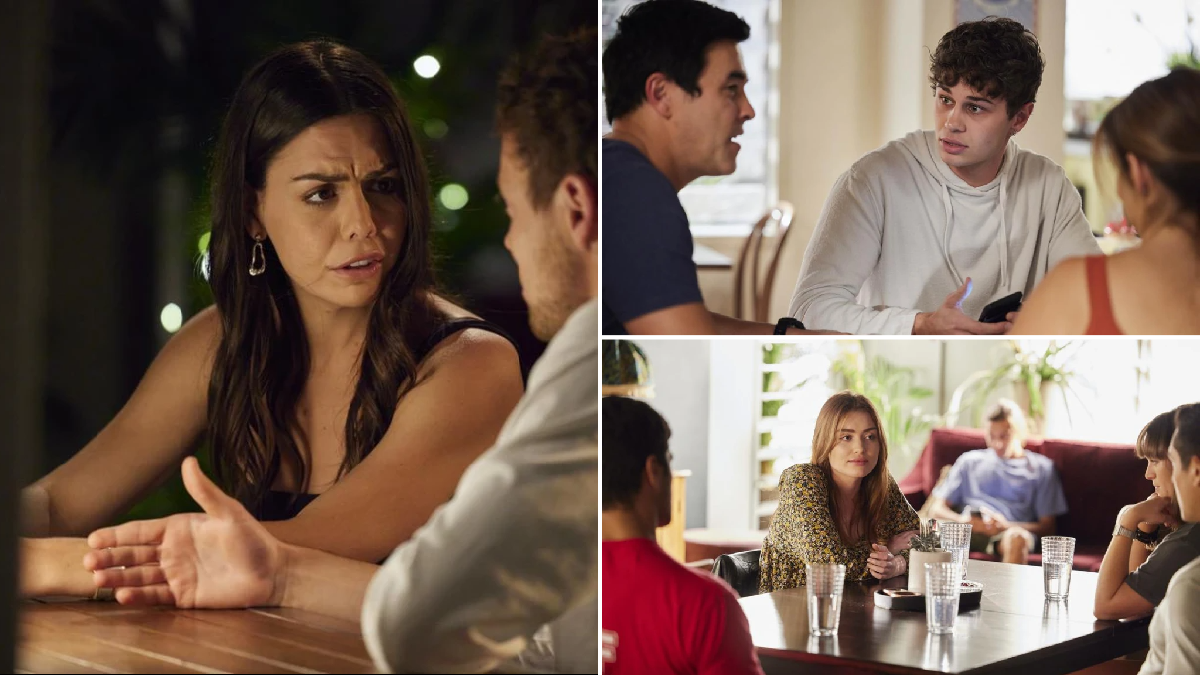 This week in Home and Away, Felicity (Jacqui Purvis) gets cold feet after realising Tane (Ethan Browne) is seriously invested in their future together. Cash (Nicholas Cartwright) doesn’t see why there’s a problem, but Felicity tells him she doesn’t see motherhood and marriage in her future. She musters up the courage to drop the bombshell on Tane, but how will he take the news?

Meanwhile, Theo (Matt Evans) is becoming firm friends with Justin (James Stewart), but their relationship is jeopardised when he overhears Justin speaking with Leah (Ada Nicodemou) on the phone. She isn’t in Cyprus as he thought – she’s back in Australia and trying to talk his father, Dimitri, around. He’s horrified and hurt by the betrayal – what does this mean for his future with them?

Elsewhere, Mackenzie (Emily Weir) gets a disturbing letter in the mail which sends her reeling. She immediately cancels a new cocktail menu Ryder’s (Lukas Radovich) been planning and tells Dean (Patrick O’Connor) he needs to start repaying the money he owes her. After a phone call with even more bad news leaves her unraveling in the storeroom, Dean realises something more serious is wrong. Eventually, his sister confesses the truth – she’s in serious debt, which means Salt could be in trouble…

Here’s what’s coming up for the week beginning Monday, April 25.

Felicity has been stunned to learn that Tane sees a serious future for them both, having never been involved in a relationship this committed. She begins to freak out and confides in Cash, but he doesn’t see the problem. She opens up and says she isn’t sure having a family is a good idea after her disastrous childhood – and she doesn’t see herself as a mother. Cash advises her to tell Tane the truth, but when she takes the plunge and reveals marriage and motherhood aren’t on the cards for her, Tane tells her to leave…

Chloe convinces Tane he’s dropped the ball with his family

Chloe has been clinging to Bella since Ari’s death, and when Nikau returns from New Zealand she starts to prevent the couple from having time together. Nikau vents to Tane about Chloe’s struggles, but when Tane speaks to her she throws him a curveball by saying Nikau is the one with the problem. She calmly says that Nikau is deflecting from his own grief by shining a spotlight on her, which leaves Tane to wonder if he’s dropped the ball with his family. Is he failing to help them when they need him?

Nikau is furious when Chloe crashes his date with Bella

After a few days tied up with seeing to Chloe, Bella and Nikau are excited to have a date night at the Farm House when they discover they’ll be alone for the night. Nikau cooks a romantic candlelit dinner for Bella, but just as they start eating the doorbell rings. To Bella’s dismay and Nikau’s fury, Chloe has shown up with dessert and behaves like a wounded dog, saying she will leave if she’s not wanted – until Bella takes pity on her and spends the whole night up chatting with her, leaving Nikau to stew by himself…

Theo and Justin have become friends after a rocky start, and they’ve been going out for dinner to avoid cooking at home. They invite John along for pizza in Salt, but when Leah calls during their meal Theo eavesdrops on the conversation, he realises Leah isn’t in Cyprus anymore – she’s in Australia, and she’s with his parents to try and get through to Dimitri…

Mia gets drunk in Salt before disappearing into the night

Mia receives a letter in the mail that sends her back into a bad emotional space – she’s got one marriage certificate…and one death certificate. Tane immediately goes into protective mode, but it isn’t long before she feels smothered and asks for space. Later, Tane walks into Salt to see Felicity refusing a very drunk Mia more wine. Tane takes her home, but when he goes to check on her she’s gone. Rushing into the night, he sees her drifting through the dark, but when he calls her name she doesn’t see him…

Roo is happy to catch up with Marilyn after her long-awaited return, but Alf’s car arriving catches them both off guard – they aren’t expecting him back from Merimbula. However, he’s back with a heavy heart. Martha’s health has taken a turn for the worst, and he’s come to tie up loose ends at the house. Roo realises her time with Martha is running out – will she be able to make amends before it’s too late?

Mackenzie reveals to Dean that Salt could be going under

Mackenzie is listening to Ryder’s new cocktail ideas when she opens a disturbing letter. Immediately distracted, she tells Ryder the cocktail menu is cancelled and goes to find Dean. She demands that he repay her the money she’s owed, saying she needs more respect after being taken for a financial ride. Mackenzie then gets a call with bad news and falls apart in the storeroom. Dean finds her and she reveals the truth – she’s broke, and Salt could be going under.

Cash has some unexpected bad news for Jasmine

Cash and Jasmine are getting into their routine now they’re living together. They’re cooking meals and going out for runs – although they quickly make the fitness competitive, and to Jasmine’s chagrin Cash beats her. However, a few hours after Cash leaves for his shift he returns to the house to deliver some unexpected news to his girlfriend – her father has died. Jasmine brushes it off, saying she hasn’t seen her father since he walked out when she was 6. Cash isn’t convinced and tells Irene to keep an eye on her. Is Jasmine hiding how she’s really feeling?