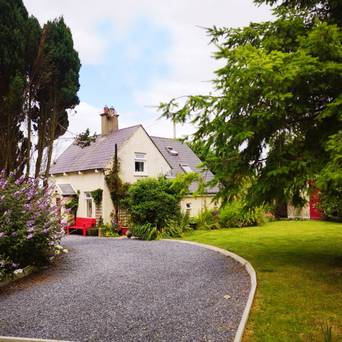 The two monkey puzzle trees in front of Dorothy McGee’s pretty cottage in Knocknasillogue, near the village of Blackwater in Co Wexford were planted in 1954 and give the house its name, but – unusually – the trees have names of their own.

“They are called Johnny and Mabel,” says Dorothy, “presumably after the people who planted them!” Dorothy bought The Puzzles seven years ago, and has lived here full-time ever since, although many of the properties in the area are used as holiday homes, which ensures that the area is ‘nicely busy’ in the summer.

Originally from Co Westmeath, Dorothy was based in the UK for many years before moving to Wexford. She was immediately charmed by The Puzzles – the house itself, the potential of the half-acre garden, and its location close to the villages of Blackwater and Kilmuckridge, and the beaches of the Wexford coast, including Knocknasillogue, a 15-minute walk away, which is safe for swimming.

Beautiful Curracloe, famous as one of the principal locations used in the film, Saving Private Ryan, and regarded as one of the best beaches in Ireland, is also close by, and Wexford Town, with its shops and restaurants, is a short drive.

The original ‘two up two down’ cottage dates from 1893 and houses the kitchen and sitting room, with two bedrooms on the first floor. A pitched roof extension has a ground floor study which doubles up as an extra bedroom, a utility room and guest lavatory. Stairs lead to an open landing and shower room. “The house had been extended nicely when I bought it,” says Dorothy, “and latterly used as a holiday home, so I did not have a lot of work to do. I put in new windows, a new front door and insulated the kitchen walls, and installed a new bio-cycle sewerage system.”

Dorothy also put in a solid-fuel stove in the sitting room; it’s now her favourite room and where she spends most of her time.

Having upgraded the house, Dorothy turned her attention to the garden: an endeavour which took up a substantial amount of her time – not, one gets the impression, that she begrudges a single minute of those efforts. Dorothy has created a garden that is a true delight.

“When I first viewed the house, the thistles and brambles were out of control and you couldn’t even see the well or the septic tank,” she remembers. “I enlisted the services of a local farmer to help me clear the undergrowth, and that made a huge difference.

“I can’t claim to have created the garden on my own though, it was achieved with a lot of help from my sisters and daughter and a family friend who would appear from time to time with a chainsaw in the early days and do great work. One day my daughter raked 12 tonnes of gravel.

“There were contributions of plants and shrubs from friends and neighbours, with some coming from my late mother’s garden and others from as far away as Denmark and Norway.”

The garden has clearly been a labour of love, and is planted with trees, shrubs and flowers, with a section fenced off and allowed to grow wild as an eco-habitat to attract birds, pollinators and other wildlife.

“We strim it every so often just to clear a path,” says Dorothy, “but otherwise we leave nature to get on with it.”

Having done everything that she feels she can with The Puzzles, Dorothy is moving on because she is ready for a new challenge.

She hopes to stay in the area, where she says that people have been very welcoming to her and where she has found a great sense of community among the local farmers and families.