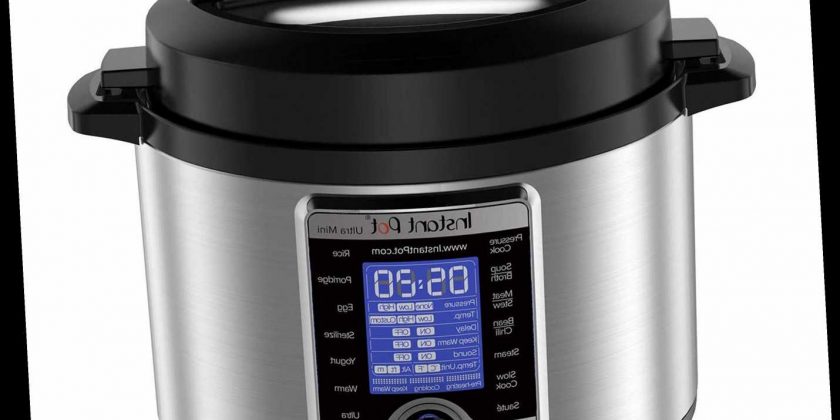 Every so often a new kitchen appliance becomes a household staple. The latest gadget to take over kitchens everywhere is the Instant Pot, a multitasking pressure cooker that practically eliminates the need for all other cooking devices. This electric pressure cooker not only slow cooks and sears, but it also steams, stews, roasts, bakes, warms, and cooks rice!

And if you don’t already own one, now is one of the best times to get yourself one thanks to Amazon’s current Deal of the Day sale. The retailer’s popular eight-quart Instant Pot, which has racked up over 3,500 five-star reviews, is currently on sale for just $99.99 right now (orig. $179.95). That’s 44 percent off its usual price tag, and it’s the lowest price it’s ever been on Amazon.

And that’s not the only marked down Instant Pot on Amazon right now. The Instant Pot six-quart six-in-one machine, which prepares meals 70 percent faster than other versions, is 19 percent off and sale for just $64.99. Built with 3rd generation technology, the updated model can cook, sautee, and steam in a snap.

Although we have yet to hear from any celebrity self-proclaimed Instant Pot lovers (we do know Food Network star Ree Drummond created her own version of it), we’d imagine cooking mavens Chrissy Teigen and Jennifer Garner have one in their kitchens, along with the rest of the world — considering the Instant Pot was reportedly Amazon’s most gifted and wish-listed item last year.

And the hype hasn’t gone down since then considering over 300,000 people reportedly bought an Instant Pot on Amazon’s 2018 Prime Day. If you have yet to purchase the appliance that’s been taking kitchens by storm, just think of this impressive sale, which wraps up at 11:59 p.m. PT tonight, as the perfect excuse to finally make the purchase. Happy cooking!