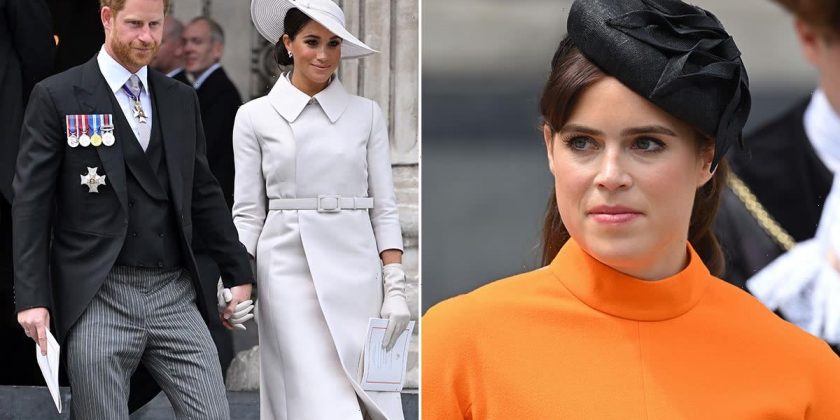 Princess Eugenie and Jack Brooksbank have been residing at the UK home of Prince Harry and Meghan Markle, Frogmore Cottage, since 2020.

Despite having made their own stamp on it, decorating the inside and raising their baby boy son there, the family have had to temporarily move out to accommodate the Sussexes during the Queen’s Jubilee celebrations in June.

The home was formerly made up of five separate properties for those working on the estate, but it was converted into one five-bedroom home in 2019 before Prince Harry and Meghan Markle moved in. Take a look around the gorgeous family home…

“Eugenie and Harry have always been close and they chat privately all the time,” a friend previously told HELLO!. “It was Harry who suggested she and Jack could use Frogmore Cottage because it is much bigger than their cottage at Kensington Palace. It is a case of one family member reaching out to another.”

Since moving in, Sarah Ferguson and Prince Andrew’s daughter has given fans glimpses inside the property as she shares updates on her son – and she has clearly added some personal touches to the interiors.

In the living room, for example, Eugenie was recently pictured sitting on a cream sofa in front of a blue bookshelf. She was surrounded by colourful cushions, and among the red fluffy trimmed designs and intricate blue and white patterns was one small green cushion with the personalised message: ‘August born in February.’

Another snap, meanwhile, showed Jack cradling their newborn in a neutral room with a cosy white linen sofa, boho cream and black scatter cushions and panelled walls in a pared-back beige hue.

In June, the royal also revealed a glimpse of her beautiful kitchen, while filming her first-born playing with a toy shark. The four-month-old was captured clutching his cuddly toy while sitting in a bouncer, while pale beige tiles in a diamond pattern and wooden cabinets in a slightly darker tone were visible in the background.

The Duke and Duchess of Sussex previously moved into the home in April 2019, shortly before their son Archie Harrison Mountbatten-Windsor was born. They kept the property as their UK base after their decision to step back from royal duties and move to north America in 2020, and few details we know about the interior suggests that much of the design was steered to suit baby Archie, and is thus ideal for Princess Eugenie and Jack Brooksbank’s child.

It’s situated in front of an incredible lake and Grade-II listed Frogmore House, where the royals hosted their wedding reception in May 2018. Inside, it is reported that there are five bedrooms, a kitchen, a living room and a nursery, formerly for Archie.

No doubt, the couple will have put a lot of effort into making Archie’s room perfect, with the whole renovation in 2019 costing the Sovereign Grant a reported £2.4million, and so it will surely make a comfortable space for Eugenie and Jack’s son.

Frogmore Cottage backs onto Home Park, with 655 acres of gardens

The home underwent extensive renovation works before Meghan and Harry moved in, and it was said that Meghan hired Soho House’s interior designer Vicky Charles to decorate the space. Apparently, Meghan requested that they used vegan and organic paint, in keeping with her largely vegan diet, to keep her son Archie healthy as opposed to using chemical-based products.

Outside, Meghan is also likely to have planted several of Archie’s lemon-yellow namesake Chrysanthemums in the garden. Archie was granted the honorary flower as part of a tradition which dictates that royal family members receive a namesake variety of the flower, in a nod to the blooms that decorated Westminster Abbey on Queen Elizabeth and Prince Philip’s wedding day in 1947.

Baby August in the garden

Vicky’s unique sense of style and what Meghan saw at the Soho House clubs may have also transferred into Frogmore Cottage. The clubs take design inspiration from the 1920s and 30s, with luxury furniture including velvet sofas and chandeliers, although Meghan and Harry will have of course made it their own.

Vicky previously told Soho House, “Private homes are incredibly different. The clients come to us because they want the Soho House aesthetic but you have to make it right for that family or whoever lives there in their space, so it’s not a cookie-cutter thing you can just drop in.”

Both Harry and Meghan are also big art fans, with Harry having gifted Meghan a romantic canvas reading ‘Everybody Needs Somebody to Love’ by British artist Van Donna, during their courtship. The Queen is also believed to have given the couple a series of paintings from her own personal collection, which Eugenie and Jack can now enjoy.