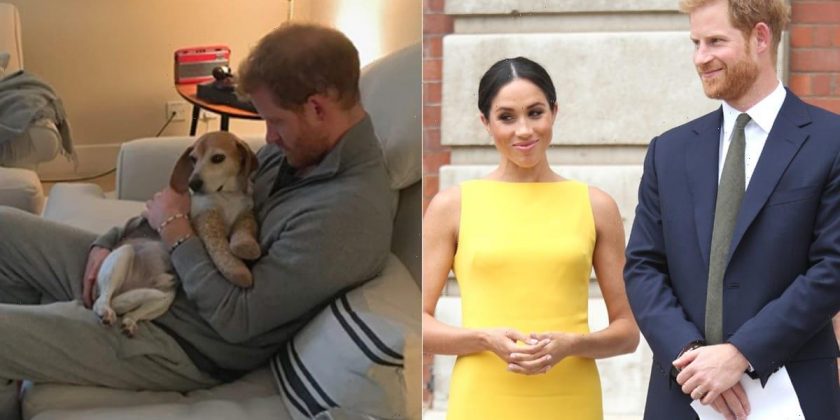 Prince Harry and Meghan Markle have given glimpses into their life stateside with gorgeous snaps of their precious children Archie and Lilibet appearing in their Netflix docuseries.

Before the little ones came along, the royal couple resided at Nottingham Cottage on the grounds of Kensington Palace and a look inside included in episode four of their show reveals the Duke of Sussex had a very sentimental tribute in the living room.

A photo taken inside the humble cottage revealed the Prince sitting with his pet dog on his lap, in a modest-sized lounge and on the wall hung a collection of sweet photographs and pictures – one being a snap of the young prince on his first day at Mrs Mynors Nursery School in Notting Hill.

The royal fashioned a pair of binoculars out of cardboard to play the media at their own game, looking their way as he held the hand of one of his teachers.

Harry had a childhood photo up on his wall

Prince Harry and Meghan didn’t stay at the cottage long, likely thanks to it being rather small. The couple admitted that friend Oprah Winfrey was surprised at their living quarters when she came for tea one day. “Oprah came over for tea, didn’t she?” said Harry to Meghan. “When she came over, she sat down, she said, ‘No one would ever believe it’,” presumably referring to the bijou size of the place.

Now the royal couple have plenty of space to call their own at their sprawling mansion in Montecito, a residence that they took a mortgage out on to secure.

The couple now have a massive home with vast garden

Speaking to The Cut, Meghan revealed that it was a garden feature which sold them on the property in the first place. “One of the first things my husband saw when we walked around the house was those two palm trees. See how they’re connected at the bottom? He goes, ‘My love, it’s us’,” the Duchess said.

The endless gardens, including the palm trees, are featured in the documentary and in one sweet clip, a young Archie could be seen on his father’s shoulders as they kicked a football in the grounds along with Meghan’s mother Doria Ragland.