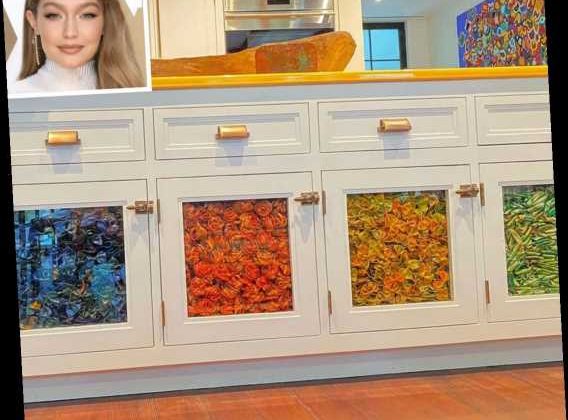 Gigi Hadid’s colorful New York City apartment is full of unique features — but perhaps none so eye-catching as her instantly iconic pasta cabinets.

The supermodel and mom-to-be collaborated with Seattle-based artist and “pasta ninja” Linda Miller Nicolson on the project. After years of following Miller Nicolson on Instagram, Hadid, 25, reached out when the time came to design a particular part of her Bohemian-inspired home, which she recently showed off to fans on Instagram.

“She pulled the artistic vision together herself,” Miller Nicolson tells PEOPLE of Hadid’s role in the process. “I find it really lovely when someone does actually take the time to do something like that, because they know their space and they know their own creative vision and they have their own understanding of how they want to live.”

Speaking about Hadid, the pasta pro adds that she comes off as “a very normal person” and “truly one of the kindest people.”

“Usually you’re not working with the person, you’re working with their people,” Miller Nicolson says of collaborating with her celebrity clients, the likes of which include Katy Perry and Matthew McConaughey. “With Gigi, she handles it herself and she’s not afraid to get in there and say what she needs."

The now-famous pasta project consists of five cabinets, each featuring a 3 ½ in. deep glass pocket at the front brimming with a few varieties of Miller Nicolson’s trademark vibrant pasta: farfalle, tagliatelle and garganelli. The color palette was inspired by the patterns in Hadid’s Missoni settee, which Miller Nicolson explains was the “most important juxtaposition.”

The artist tells PEOPLE that it took her six weeks to develop a system that she was happy with to ensure the pasta’s shelf-life and that the project ultimately took a month to complete.

While the result is a tasteful burst of color, it’s not exactly tasty. “I had to hand lacquer and shellac every piece of pasta,” she says of this particular project, adding, “so no snacking on that pasta!”

RELATED: Gigi Hadid Reveals Why She's Holding Off on Sharing Pregnancy Photos — and Shares Peek at Her Bump

Typically, Miller Nicolson — who says she “learned to make pasta from my grandparents” and has kept up the tradition “every week of my life since I was four years old” —  focuses on edible creations, dyed entirely with natural food colorings like beets and blueberries.

“I’ve always embraced the ephemeral aspect of the work… you don’t necessarily have to hold onto beauty or the art, it’s about the process,” she explains.