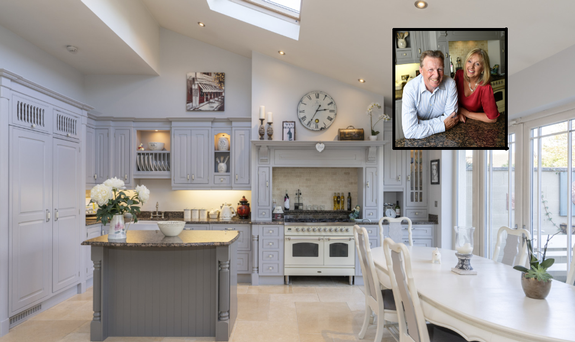 ​From 1950s and 1960s semis to a period Victorian and a 1930s bungalow, Dublin couple Lorraine and Rob Greenhalgh have lived in all sorts of houses. But having tried and tested them all, it is now their fervent belief that a new replica Victorian by Dermot Bannon’s builders is your only man.

“We love Victorian homes, the period neoclassical features, the dimensions and layout, the coving and the lovely ornate fireplaces. But after doing one up years ago we also learned that we don’t love the draughty rooms and the cold and the leaky pipes,” says Lorraine Greenhalgh.

So the Greenhalghs moved from their draughty Victorian to a 1930s bungalow on the Clontarf Road in 1991. But after a few years in situ both felt something wasn’t right. Still they were hankering after those 19th century trims and dimensions. “So we hit on an idea. We decided we could knock down the bungalow, build two replica Victorians, sell one to fund the work, then move into the other. That way we could have it all, the period elegance and the modern cosiness.”

Not only did they decide to build a pair of “new” Victorians, and live in both; but the Greenhalghs also opted to design the houses themselves. “We made our sketches of the room layouts and determined what covings and fittings we would need. We picked out the brick. In fairness we had the help of my brother who is a structural engineer.” And for amateur draftspeople, it all worked out remarkably well. Lorraine is also an artist on oil and canvas whose eye for colour has helped in no small amount with the interior design. She has on occasion worked as an interior designer. But it wasn’t plain sailing. Just as the boom busted they hired their builder. “On the day the work was supposed to start, he didn’t turn up. It later emerged that the firm had gone bust.

“That whole thing held us up for eight months. But in the end we were lucky because otherwise we wouldn’t have had Sugrue.”

Fans of Dermot Bannon’s Room to Improve will know that Sugrue is also Dermo’s on-screen favourite building outfit bar none. The family firm run by father and son, Dan and Cormac Sugrue, have for 40 years has become renowned in north coastal Dublin for its quality new one-off houses, restorations and extensions.

On-screen appearances by Cormac on Room have also tended to cause a big reaction on social media from an appreciative and largely female contingent.

“Once we got Sugrue in, there was a lot of hard work but I can honestly say we had none of those Grand Designs type problems. The first house was finished within six months and the second soon after.” They lived in one, then the other before selling the first one.

That was 11 years ago and now the three Greenhalgh children have grown up. Two have already flown the family nest and one is looking like going soon. “It means that we are reluctantly selling up,” says Lorraine. “It’s too big for us now. Recently the penny dropped with me that I hadn’t actually been on the second floor in two weeks.” But the Greenhalghs also appear to have a new project in mind. “We are very excited about it. I can’t say anything right now.” The house has been placed on the market through Gallagher Quigley seeking €1.4m.

The red-brick semi is located directly overlooking the sea, Bull Island and the famous Wooden Bridge.

Constructed in 1907, this links the coast road to Bull Island, also a well known haven for bird life. The views from No 334a scope the sea from Howth Head, all the way back to the Wicklow Mountains.

And despite being 11 years old, it still looks quite new. The house spans 2,588 sq ft, two and a half times the size of an average family semi and it also carries a high B3 energy rating.

As the owners intended, the interior closely mirrors that of the classical period house style of the late Victorian era. Off the airy hallway there is a large front reception room that opens via double doors into another more informal living room. This in turn runs into an open plan kitchen, living and dining space which runs the entire width of the back of the house.

This complete interlink, which allows all rooms to open up into one another was fully intentional and designed to help maximise that other benefit of a big period house – Christmas. “It’s just amazing at Christmas when you can have a big party and people can just move right through the house. The fact that we can open the whole house up like this really makes use of all the space,” says Lorraine.

The Greenhalghs were also hands-on when it came to sorting authentic period style fare made modern. “We had the front door specially made and we also designed the stained glass panels. It was done by a craftsman based in Baldoyle who also worked on all the internal window joinery.”

For authentic handmade fireplaces they headed up north to the award winning firm of Treanor in Monaghan. “We picked out the marble and we ordered two period-style fireplaces for the main two receptions but we opted for a modern wall-mounted version for the kitchen. We were anxious I when they arrived because we didn’t know what to expect. But they were absolutely perfect.” For the home’s four bathrooms, the couple took the plane to Britain in search of the perfect tiles and the perfect period -style new stand-alone tub. “One of the things we really didn’t like about our old Victorian home was the creaky old floor boards. So this time around we had concrete floors with carpet over. On the ground floor we installed underfloor heating, which is a real joy and no more noise,” says Lorraine.

The house has high ceilings throughout. The heating is gas fired and the windows are specially built double-glazed sash versions for further authenticity. The fanlit front door leads to an inner hall and another door with stained glass and then into the hall with an exception-crafted period-style staircase with hand turned balusters and mahogany rail.

The front reception room opens via double doors into another more informal living room. This in turn opens into the open-plan kitchen, living and dining space. There’s a wall-mounted gas fire, as well as a good-sized dining table which accommodates 12. The smart hand painted, “in frame” fitted kitchen has an array of cupboards, painted a French grey to match the granite worktop. All appliances in the kitchen are integrated and there’s an island unit. The floor is tiled in marble, as are the hall, utility room and bathroom floors. Off the hallway is a utility room and a guest bathroom.

Upstairs there are four double bedrooms. The master chamber at the front of the house incorporates a smart marble finished walk-in shower ensuite, with twin wash hand basins and a walk-in dressing room. A second bedroom also has an ensuite and a walk-in wardrobe. The top floor room could work well as a home office. The family bathroom has that freestanding period-style bath as well as an extra-large walk-in shower. The garden is 40 feet long and colourfully planted. Enquiries to Gallagher Quigley (01) 818 3000.