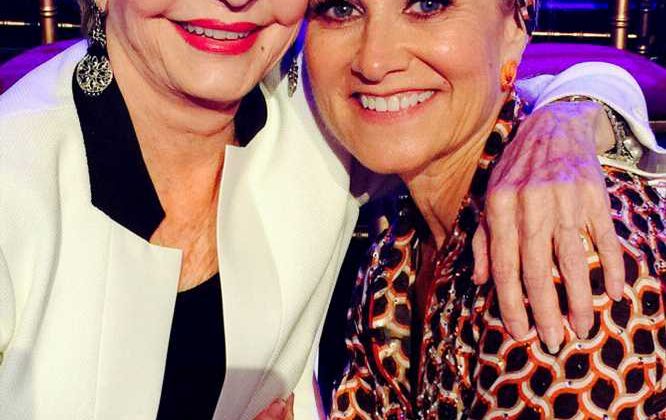 When Florence Henderson passed away on Thanksgiving in 2016, Maureen McCormick was one of the first to lead Hollywood in mourning. Now, almost three years later, McCormick still finds herself emotional over her on-screen mother’s passing — and says a special tribute to Henderson inside the A Very Brady Renovation home left her in tears.

Premiering September 9, HGTV’s A Very Brady Renovation follows six of the original cast members fromThe Brady Bunch as they renovate the famous house that served as the facade of the Brady family home from 1969 to 1974. Each former Brady kid is matched with an HGTV design expert to complete the project, and each coupling is assigned to a different room in the home.

McCormick, 62, who played Marcia Brady on the show, was paired up with Property Brothers stars Jonathan and Drew Scott. While touring the house for the first time after the renovations were complete, McCormick recalls finding a few hidden tributes to Henderson — who played the matriarch of the family, Carol Brady— in the finished house, and says they took an emotional toll on her.

“I didn’t know it was coming, but I entered the master bedroom with Mike Lookinland [who played Bobby Brady] on camera — we hadn’t seen it at all — and we opened up the closet and there were negligees there that Florence used to wear,” McCormick told PEOPLE at the A Very Brady Renovation premiere in L.A. “You know, those beautiful pastel colors that she would get into bed with.”

But that wasn’t all: “Barbara, her daughter who was always like a sister and a best friend to me, gave this glass, clear paperweight heart, and the heart was gold. They told me on camera that that was [Henderson’s], so that was just… that got me.”

McCormick and Henderson became friends on set of the iconic sitcom, and stayed close until the late actress’s death at age 82. Henderson even visited McCormick on the set of Dancing with the Stars while she competed, just a few days before her death.

Speaking with PEOPLE just after her passing, McCormick said, “There are so many people who never met Florence but feel like she was a best friend or a mother to them. To me, she was both. I first met her when I was just 12 years old. At the time she was like a second mother but she was so much more than that. She became a dear friend. When you do a show like The Brady Bunch, you have such a bond together. I spent so much time with her on weekends at her house with her family. Her kids became almost siblings — and all of them are such beautiful people today, which is such a testament to Florence.”

McCormick even wore her own memento of Henderson to the A Very Brady Renovation premiere: A sapphire heart-shaped necklace on a gold chain.

“I’m wearing this in honor of her,” McCormick said, showing off the piece of jewelry around her neck. “There was a charity event back in her hometown and she couldn’t do it and she asked me if I’d go in and take over for her, which I did. She gave this to me as a thank you gift.”

Though she’s gone, McCormick says she still feels connected to her beloved friend through these mementos, and the newly renovated house has helped bring her closer to Henderson as well as the other The Brady Bunch stars who have passed, including Robert Reed, who played Mike Brady, and Ann Bradford Davis, who played Alice Nelson.

“I truly feel her with me every single day,” McCormick says of Henderson. “And Bob and Annie. [This process] was very, very emotional because I spent five incredible years of my life on this show… And it was absolutely amazing.”