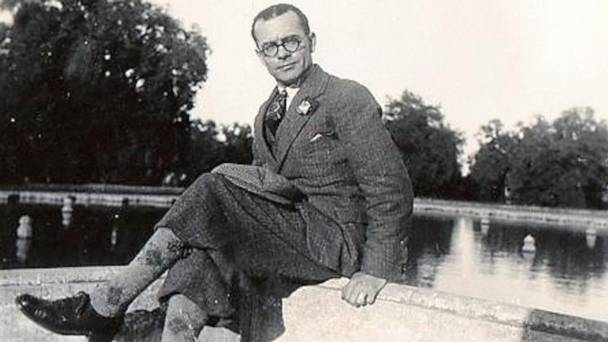 On a blustery Monday in September, two months before his 50th birthday, Herbie Simms of Dublin Corporation headed out to Dun Laoghaire in gale force winds and pouring rain, a handwritten note tucked into one pocket and a bottle of whiskey in another. He had written: “I cannot stand it any longer, my brain is too tired to work any more. It has not had a rest for 20 years, except when I am in heavy sleep. It is always on the go like a dynamo and still the work is being piled on to me.”

Maybe he headed down the West Pier and looked back across the choppy sea to his homeland. Maybe he sheltered on a recessed waterfront bench as he drank from his bottle. What is certain is that some time between Monday night to Tuesday morning, the shattered architect climbed down below the Coal Quay Bridge and waited until a steam locomotive came rumbling down the line. This son of a London train driver, who must have taken great delight in steam engines as a youngster, timed himself and then hurled his body in front of it.

Likely it was the whiskey, but the otherwise meticulous Simms made a horrible mess of his last job. He was found the next morning lying on the tracks with one arm severed and still clinging to life. He was taken to St Michael’s Hospital and died later that day. It was Tuesday, September 28, 1948, and this year marked the 70th anniversary of his death.

Save for a minor event in September this year by Dublin City Council, it remained unmarked in yet another year of state commemorations during which we have hailed the Great War and unveiled statues to William Orpen and Big Tom while taking the Haunting Soldier to St Stephen’s Green. Herbie was childless and his wife Eileen went on to remarry. Today his grave in Deansgrange is untended. So who was he?

Born in a two-bed house in Victoria Street, London, he went to Haverstock Industrial School. During the First World War he served in the Royal Field Artillery and obtained an ex-service scholarship of £150 for three years. He used it to enrol in architecture at Liverpool University in 1919 but had to drop out when the money ran out. In those days it was a huge achievement for a train driver’s son to go into third level education.

On the grounds of his previous experience and the high standard he had reached in his studies, he was permitted to take the exams. He passed in March 1923 and came to Dublin to work for a small practice.

In 1925 Simms was appointed a temporary architect to Dublin City for six months, soon extended until the end of 1927. In 1926 he travelled London, Liverpool and Manchester to investigate the latest trends in flat developments.

He went to India, home of the world’s worst slums, and returned to Dublin to take the new job of city architect in charge of design and delivery of housing. He began designing a palette of flats and houses which could be built cheaply, at speed, but also to a high standard. Then, suitably armed, Simms went to war.

There were 30,000 families living in Dublin slums, with 20,000 in single-room accommodation. In 1936, in a house in Coleraine Street, one family of 11 lived in one room measuring 8ft x 8ft while one Winifred O’Rourke told a newspaper she had lost five children so far that year. The child death rate in Dublin slums was 12pc.

As today, politicians and the local authority were part of the problem. A report in 1914 revealed 16 members of Dublin Corporation owned tenements and had intervened to derail the enforcement of regulations.

In his 16 years as housing architect Simms didn’t let up for a second, taking the infanticidal beast by the scruff of the neck and kicking it steadily, relentlessly, and determinedly, almost to death.

By the day of his appointment with that train, Simms had pushed, dragged, strained, fought and cajoled the powers that be to erect 17,000 homes, housing more than half of all slum families. He let nobody move in until he had personally inspected and signed off on each property. Simms homes had two to three bedrooms, running water, heating, gardens, sound construction and playgrounds.

By the very momentum he had shouldered into it, the big public house building engine Simms had designed, assembled, fired up and rolled out, continued to rumble steadily on after his death, and 90pc of slum dwellers were rehoused by the 1960s. His ideas and public housing types spread to other Irish cities and to towns nationwide. All this he achieved in the immediate aftermath of the Great Depression.

Today, Dublin is Simms City. Among his are the flats of Chancery Place, Marrowbone Lane, Townsend Street (where Pearse House is facing demolition) and the houses in Crumlin and Cabra, the latter now selling for €400k privately after the State gave them away for a pittance.

Herbie had worked under the protective wing of chief city architect Horace O’Rourke, who shielded his efforts from the predation of politicians and petty officialdom. But O’Rourke retired in 1945 and the post remained unfilled, leaving Simms to shoulder the lot. Because he cared, he cracked.

The city surveyor wrote: ‘Behind a quiet and unassuming manner there lurked a forceful personality; and Mr Simms could uphold his point of view with a vigour that sometimes surprised those who did not know him well. By sheer hard work and conscientious devotion to duty, he has made a personal contribution towards the solution of Dublin’s housing problem, probably unequalled by anyone in our time… It is not given to many of us to achieve so much in the space of a short lifetime for the benefit of our fellow men.’

In 2018, with 100,000 on housing lists and 10,000 homeless, there was nothing for Simms from a commemoration-craved Government. No medals from architects who prefer swashbuckling privateers. But if the 1,200 Jews Oskar Schindler saved from the Holocaust are now numbered at 8,500, how many Dubliners are today descended from the 20,000 slum children that likely didn’t die because of Herbert George Simms, Dublin’s home-building dynamo? Born 120 years ago on this day in 1898.