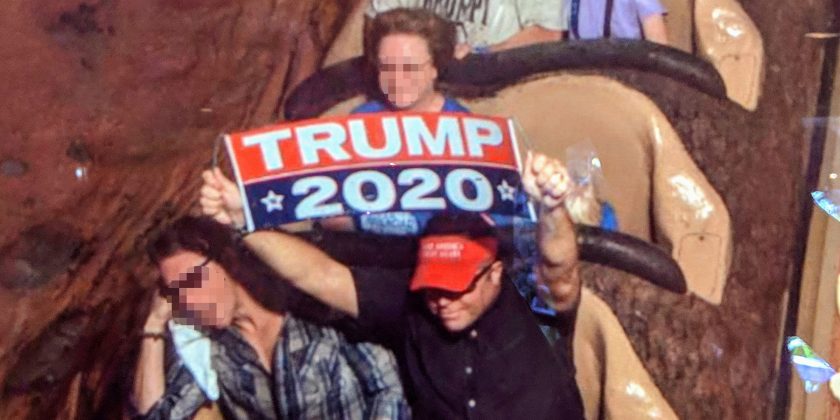 A man was permanently banned from all Disney theme parks after he repeatedly held up “Trump 2020” signs on rides, including Splash Mountain.

According to a spokesperson for Disney, displaying any type of sign or banner—no matter what it says—is not allowed at Disney parks, and this is not the first time this particular guest was warned of the rule.

“Walt Disney World welcomes all Guests to enjoy our parks; however, demonstrations and the display of signs and banners is not permitted on the premises,” the spokesperson said. “We have previously reminded this guest about our rules.”

Earlier this fall, Dion Cini—who was a Disney annual pass holder—previously hung another political banner from the train station at Magic Kingdom. When employees of the park tried to counsel him about the rules at the time, the Disney spokesperson says, they had to temporarily suspend his ticket because he wouldn’t visit guest services per their protocol. They eventually settled the matter over the phone and warned him that if he tried to display another banner or flag of any kind in the park he would be permanently prohibited from entering.

In November, Cini brought a sign into the park again and held it up while riding Splash Mountain, as well as sign that read “Keep America Great,” which he displayed while riding another roller coaster in the park.

The Disney spokesperson tells PEOPLE that the ban has nothing to do with the content of the banner, and states that Cini violated park rules intended to prevent interference with other families’ experiences at Disney World. On a high velocity ride like Splash mountain, they note, a flag flying out of someone’s hands could injure or cause danger to other guests.

Based on Disney’s official park rules, aside from their banner and flag ban, they also have the right to prohibit any items that can be deemed harmful or disruptive.

RELATED: People Keep Scattering Ashes at Disney Theme Parks — and Custodians Are Over It

Cini, who has also reportedly hung Trump banners at Yankee Stadium and on a rowboat in New York’s Hudson river, told the Washington Post that he uses these re-election signs in high-traffic areas to gain attention.

“I do things differently,” he said. “I do things that will go viral to support the president. I’m trying to let other Trump supporters know that you don’t have to go to rallies. You can do this on your own.”