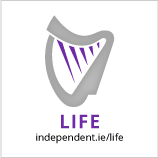 Semple Woods in Donabate is near Newbridge House – one of the finest surviving examples of Georgian architecture – and its 370 acre park. Indeed, the new development is named after George Semple, the local architect and builder who oversaw the construction of Newbridge House and later designed a large drawing room with a picture gallery for the back of the mansion.

Glenveagh Properties is building around 250 homes at the Hearse Road scheme, which was initially released in April 2019. A second phase of 45 homes followed in mid-September and while additional three and four-beds will be released later in 2020, the last remaining five-bed properties at Semple Woods are presently on the market.

Starting prices for the five-bed detached homes, which have between 1,984 sq ft and 2,000 sq ft of accommodation, range from €580,000 to €584,500. The houses either have a full-brick façade or a rendered finish and there are UPVC double-glazed windows throughout.

Each kitchen, with its soft-close doors and drawers, is supplied by Gallagher Kitchens, while the master bedroom and second bedroom are fitted with shaker-style wardrobes. There is tiling to the floors and wet areas of the bathroom, ensuites and guest WC.

The A-rated houses are located on the southern edge of Donabate town centre, where they are less than a 10-minute walk from the train station.