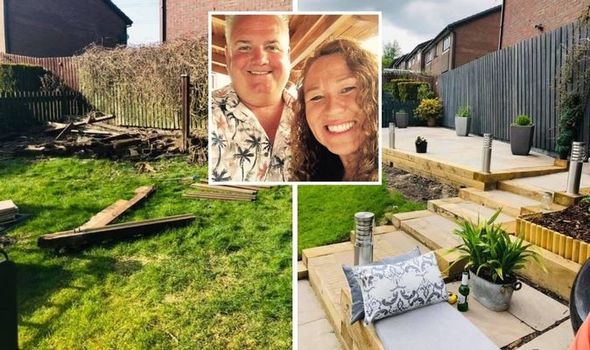 Home improvements are often expensive when getting a professional to do the work. Elizabeth Astin, 56, wanted to improve her “ugly” and “barren” garden and along with her husband, managed to transform their outdoor space, saving £7,000 in the process.

Elizabeth, who is a Registered Nurse, spoke to LatestDeals.co.uk about her transformation.

She said: “We moved into our house as a new building 19 years ago. When we bought it, the agent told us that there was no back garden. What they meant was that there was a lower patio area with a huge retaining wall and a sloping upper area that was north facing. Not very attractive at all.

“Still, it stood us in good stead over the years. Our girls had water fights, we bought numerous bouncy castles, water slides and paddling pools and my husband and his dad made a decking for the adults to chill. We always wanted to improve it but it was for the kids. While they were young, it was important for them to have a safe space to play.”

Now the couple’s children have grown up, Elizabeth and her husband decided to embark on the project of transforming their garden.

They managed to source materials from budget retailers such as B&M and The Range as well as Amazon.

Elizabeth added: “Before starting the makeover, I had spent a lot of time browsing the Facebook group ‘DIY on a budget gardens’.

“I learned a great deal and got lots of inspiration from group members. We were always mindful to try and keep costs down without compromising on quality and our dreams.

“We saved up for all of this including replacing the iron railings with a lovely glass fence. It was a big project.

“It was a complete makeover. We also had to pull down and replace an ugly iron fence on top of the large retaining wall.”

The couple got a builder in to do the landscaping and build the patios as well as someone to build the glass and steel fence.

The building work set the couple back £9,000, although they managed to save money by their nephew fitting the electrics for them.

Elizabeth continued: “Also, we managed to reduce the price by using wooden railway sleepers rather than building retaining walls. The builder provided all the materials. We had an original quote for £16,000 from another builder so by having the sleepers we saved approximately £7,000.

“The glass fence was £3,200 and once that was installed, my husband used the leftover Indian stone and sleepers from the builder to create a little zen area.

“He built a bench and a space to put a relaxing water feature on. We also reused the old grey slabs from the original patio and laid them in the front garden, to build a little seating area.

“Part of this area included tub chairs we already had from Aldi, which we had bought the year before for £50.”

The DIY fan managed to pick the day bed up from The Range for £400, half price compared to other retailers.

She said: “They were very cheap, probably no more than £50 for all of them.

“Now the project is finally done, it’s our safe haven. We managed to save thousands by combining professional work with DIY and my husband created an amazing little zen area that was previously barren. The garden is a sanctuary for us to relax in now.”

Tom Church, Co-Founder of LatestDeals.co.uk, said: “Elizabeth and her husband have managed to create a stunning garden that no doubt increases the value of their property, after waiting nearly two decades to complete the makeover.

“With difficult areas, sometimes getting a professional in is best – but as Elizabeth has proven, sourcing budget supplies and doing parts of the overall makeover yourself can save you thousands of pounds. I hope this garden lasts them many years to come.”