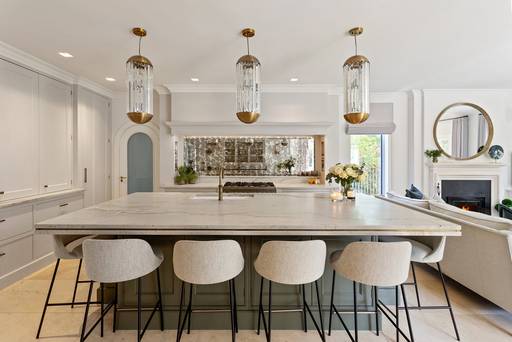 Living with an in-demand interior designer like Elaine Jerrard can prove to be an unorthodox existence for the other occupants of her home – namely hubbie David and their five children.

For one thing, Jerrard has the perfect excuse to be constantly off in the shops, and buying swanky upmarket stuff for the house. And changing everything around. All the time.

Since Elaine’s interior design business Elk House took off back in 2016, the wallpaper at their Co Wicklow house just keeps on changing, the light fittings are always being updated and the furniture replaced. Recently a new bespoke kitchen was installed.

“Ok it’s true. I can definitely be accused of using our house as a tryout zone for new furnishings and fittings. But before I am ready to recommend, let’s say a new line of fabric linen wallpaper to a client, I’m going to have to test it first to make sure it looks good and that it does its job. So I do that at home.” “The other advantage of course is that I can bring clients here to show them suggested fittings or furnishings in situ.”

The designer has been noted for her efforts to promote Irish and locally crafted content. She is known for her lean towards handmade curtains, all of which are produced here in Ireland.

She uses handmade Irish cushions from a “secret source”, a former top banking executive who kicked off a new home industry making bespoke versions. There’s also a big lean towards Irish joinery in her schemes.

Jerrard is a former estate agent who left her job to start a family just as Dublin’s property market tanked in 2006. “As an estate agent I was always helping vendors with layouts and staging. it was just something I enjoyed doing.”

Five children and ten years later she was asked by a developer friend to help out with the show house for a new scheme he was launching. It worked out so well, that before long she was being asked by one developer after another to do more show houses at other schemes as the market revived.

Private home buyers who saw her work and were impressed called up to hire her talents for their own homes. Since then she’s done two-up, two-down terraces, reinvigorated 1970s pads, right up to large period properties. In this way Jerrard is unusual as most designers start with private clients and only later move to new homes. Her fresh classic look is very much in evidence at recently launched schemes. Among the her recent works are show homes at Station Manor in Portmarnock, Hollywoodpark in Hollystown D16, Shandon Wood in Monkstown and the upmarket Clairville Lodge in Malahide.

Since the market revived, Jerrard and a handful of other designers have been part responsible for making show homes into something of a trend.

In times past, developers got their wives to decorate, with the result that we ended up with a lot of gingham curtains and bedspreads. Interiors were wholesome and practical, but rarely inspiring.

Today show home designs are such that many buyers will now hang back for what is increasingly being viewed as the star prize, the show house that comes to market late or last in a scheme. The advantage for buyers has been that they get the full furniture and fittings scheme and a unified look as completed by a recognised designer. Developers quickly cottoned on to this and will now often charge €100k extra for the show house in a swish scheme.

But while Elaine is quite happy to stay put at their 11-year-old home at Rocky Valley Crescent in Kilmacanogue, Co Wicklow (and update it endlessly for research purposes) David is seeking a new challenge and wants to restore a period property in the Wicklow county area. “It’s going to be a valuable experience, for me too” says Elaine.

So the couple have placed their home for sale through Savills and DNG with a price of €995,000 attached, around half of what they sold for (€1.8m) when they were launched brand new back in 2006.

This is fortunate for those looking for a substantial home in the area with high level fittings. In fact, this is the original Jerrard show house.

Given her professional requirements to update home for her business, there are obvious advantages here for a buyer.

For example earlier this year, Jerrard had a new Keith Alexander designed kitchen installed. The drawing room has also been fitted with (again done this year) new panelling, cabinetry, a new stove. There’s been new oak flooring put down.A brand new boiler has also been installed since the start of the year. And on it goes.

The detached house has three reception rooms and six bedrooms of which four are ensuite. Elaine’s favourite area is the massive 22.5 ft x 15 ft kitchen, dining room and living room space. Off it is a utility and garage. Also off the kitchen is a self-contained family room. On the other side of the hall is the formal lounge.

Five bedrooms are on the first floor and the master bedroom suite takes up the entire second floor with bedroom, walk-in wardrobe, a separate dressingroom and a full ‘his and hers’ ensuite bathroom.

Besides all the new stuff, and the mark of a designer, it comes with a quarter acre of ground, something new properties close to Dublin can’t manage any more. There’s a smart home media system and central vacuum system. Positioned at the end of a cul de sac, it’s safe for kids. This area is most popular with executives who want to mix country side access with a city career.

And when you’re done designing, the residents in this estate have their very own and private entrance to Avoca Handweavers.

No word of a lie.